In the lower picture, the light has been collimated.

Collimated light is light whose rays are parallel, and therefore will spread slowly as it propagates. The word is related to "collinear" and implies light that does not disperse with distance (ideally), or that will disperse minimally (in reality). A perfectly collimated beam with no divergence cannot be created due to diffraction, but light can be approximately collimated by a number of processes, for instance by means of a collimator. Collimated light is sometimes said to be focused at infinity. Thus as the distance from a point source increases, the spherical wavefronts become flatter and closer to plane waves, which are perfectly collimated.

The word "collimate" comes from the Latin verb collimare, which originated in a misreading of collineare, "to direct in a straight line".[1]

Laser light from gas or crystal lasers is highly collimated because it is formed in an optical cavity between two parallel mirrors, in addition to being coherent. In practice, gas lasers use slightly concave mirrors, otherwise the power output would be unstable due to mirror non-parallelism due to thermal and mechanical stresses. The divergence of high-quality laser beams is commonly less than 1 milliradian, and can be much less for large-diameter beams. Laser diodes emit less collimated light due to their short cavity, and therefore higher collimation requires a collimating lens.

Synchrotron light is very well collimated. It is produced by bending relativistic electrons around a circular track.

The light from stars (other than the Sun) can be considered collimated for almost any purpose, because they are so far away they have almost no angular size.

An example of an optical collimating lens.

This principle is used in Full Flight Simulators (FFS), that have specially designed systems for displaying imagery of the Out-The-Window (OTW) scene to the pilots in the replica aircraft cabin.

In aircraft where two pilots are seated side by side, if the OTW imagery were projected in front of the pilots on a screen, one pilot would see the correct view but the other would see a view where some objects in the scene would be at incorrect angles.

To avoid this, collimated optics are used in the simulator visual display system so that the OTW scene is seen by both pilots at a distant focus rather than at the focal distance of a projection screen. This is achieved through an optical system which allows the imagery to be seen by the pilots in a mirror which has a vertical curvature, the curvature enabling the image to be seen at a distant focus by both pilots, who then see essentially the same OTW scene without any distortions.

This is shown diagramatically in more detail in the entry on Full Flight Simulators. 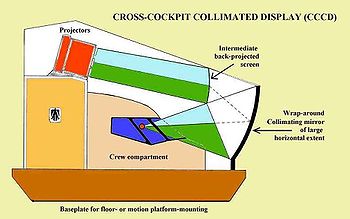 "Collimation" refers to all the optical elements in an instrument being on their designed optical axis. It also refers to the process of adjusting an optical instrument so that all its elements are on that designed axes (in line and parallel). With regards to a telescope the term refers to the fact that the optical axes of each optical component should all be centered and parallel, so that collimated light emerges from the eyepiece. Most amateur reflector telescopes need to be re-collimated every few years to maintain optimum performance. It is done by simple visual methods such as looking down the optical assembly with no eyepiece to make sure the components are lined up, or with the assistance of a simple laser collimator or autocollimator. Collimation can also be tested using a shearing interferometer, which is often used to test laser collimation.

"Decollimation" is any mechanism or process which causes a beam with the minimum possible ray divergence to diverge or converge from parallelism. Decollimation may be deliberate for systems reasons, or may be caused by many factors, such as refractive index inhomogeneities, occlusions, scattering, deflection, diffraction, reflection, and refraction. Decollimation must be accounted for to fully treat many systems such as radio, radar, sonar, and optical communications.