The list of Assyrian kings is compiled from the Assyrian King List, an ancient kingdom in northern Mesopotamia (modern northern Iraq) with information added from recent archaeological findings. The Assyrian King List includes regnal lengths that appear to have been based on now lost limmu lists (which list the names of eponymous officials for each year). These regnal lengths accord well with Hittite, Babylonian and ancient Egyptian king lists and with the archaeological record, and are considered reliable for the age.[1]

Prior to the discovery of cuneiform tablets listing ancient Assyrian kings, scholars before the 19th century only had access to two complete Assyrian King Lists, one found in Eusebius of Caesarea's Chronicle (c. 325 AD), of which two editions exist[2] and secondly a list found in the Excerpta Latina Barbari.

An incomplete list of 16 Assyrian kings was also discovered in the literature of Sextus Julius Africanus. Other very fragmentary Assyrian king lists have come down to us written by the Greeks and Romans such as Ctesias of Cnidus (c. 400 BC) and the Roman authors Castor of Rhodes (1st century BC) and Cephalion (1st century AD).

Unlike the cuneiform tablets, the "other" Assyrian King Lists are not considered to be wholly factual (since they contain some mythological figures) and thus are only considered to contain minor historical truths. Some scholars argue further that they are either entire fabrications or fiction.

There are three extant cuneiform tablet versions of the King List, and two fragments.[3] They date to the early first millennium BC—the oldest, List A (8th century BC) stopping at Tiglath-Pileser II (ca. 967–935 BC) and the youngest, List C, at Shalmaneser V (727–722 BC). Assyriologists believe the list was originally compiled to link Shamshi-Adad I (fl. ca. 1700 BC (short)), an Amorite who had conquered Assur, to the native rulers of the land of Assur. Scribes then copied the List and added to it over time.[4]

Ctesias as court physician to Artaxerxes II, claimed to have access to the royal historical records. Ctesias' list of Assyrian kings was included in his Persica, a work covering the history of Persia, but the first 3 books were dedicated to pre-Persian Assyria entitled "The History of the Assyrians". How much of Ctesias' king list is factual history is still debated, while most scholars agree large parts are fiction, it is generally agreed that there is historical truth based on the probability his list was rooted in transmitted oral tradition.[5][6] Classical scholar Robert Drews however has argued that Ctesias' list contains information from Babylonian tablets.[7] Although Ctesias's entire work is lost, fragments of it are found preserved in Diodorus Siculus, Nicolaus of Damascus and Photius. From these fragments it is known Ctesias dated the founding of the Assyria to c. 2166 BC, by king Ninus, husband of Queen Semiramis, and 30 further Assyrian kings followed for 1300 years in succession to Sardanapalus (c. 866 BC). [8] Ctesias' list of 30 successors from Ninus (and Semiramis) to Sandanapalus is lost.

Castor of Rhodes and Cephalion

In the 1st century BC, Castor of Rhodes compiled an Assyrian King List, similar to that of Ctesias'. However fragments only remain in mutilated form, but it is known from these fragments that Castor's Assyrian king list started with Belus, but like Ctesias' included Ninus, also said to be the husband of Semiramis. However Ninus equates in Castor's list to the second king, not the first and is said to have ruled for 52 years. Castor further dated Belus to 2123 BC.[9] A fragment from Cephalion, names Ninus' successor to be Ninyas, his son.

A final list is found in the Excerpta Latina Barbari. The list can be found in Scaliger's Thesaurus temporum (1606). The list dates Belus, the first Assyrian king to c. 2206 BC.[11]

The following kings are listed from the cuneiform tablets.

No regnal lengths are given for kings before Erishum I.

Kings who Lived in Tents

This section shows marked similarities to the ancestors of the first Babylonian dynasty.[4]

Kings whose Fathers are Known

Kings whose Eponyms are not Known

These are early rulers of Assyria.[4]

Damage to the tablets in all three extant King Lists before Enlil-nasir II (ca. 1420–1415 BC (short)) prevents the calculation of approximate regnal dates from Erishum I to this point. Additionally, three kings attested elsewhere from this period are not included in the standard King List. The remainder of the King List then has an unbroken chain of regnal lengths from Enlil-nasir II on. Disparities between the different versions of the King List for the reigns of Ashur-nadin-apli (ca. 1196–1194 BC (short)) and Ninurta-apal-Ekur (ca. 1182–1180 BC (short)) contribute to the debate over the chronology of the ancient Near East.[4][18] Georges Roux and A. Leo Oppenheim provide dates in their King Lists, but these are open to debate[19] 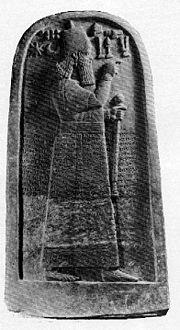 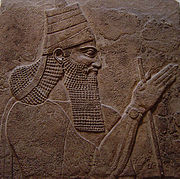 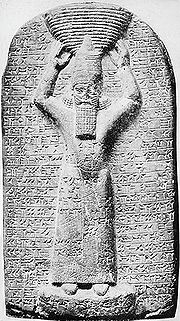 The dates for the very end of the Assyrian period are uncertain due to the lack of limmu lists after 649 BC. Some sources list Ashurbanipal's death in 631 BC, rather than 627 BC; Ashur-etil-ilani then reigns from 631 to 627, and Sin-shar-ishkun reigns until 612 BC, when he is known to have died in the sack of Nineveh.[13]