Bathroom
This article is about rooms for bathing. For a room containing a toilet and possibly also a sink, see toilet (room). For a public toilet, see public toilet. 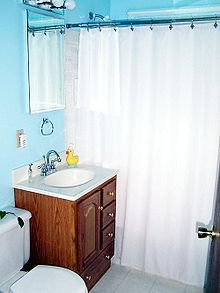 A bathroom is a room for bathing in containing a bathtub and/or a shower and optionally a toilet, a sink/hand basin/wash basin and possibly also a bidet.

In North American English a "bathroom" is commonly used as a euphemism for a room containing a toilet or possibly a public toilet (which, in the USA, is more commonly called a "restroom").

The Great Bath of Mohenjo-daro

Although it was not with hygiene in mind, the first records for the use of baths date back as far as 3000 B.C. At this time water had a strong religious value, being seen as a purifying element for both body and soul, and so it was not uncommon for people to be required to cleanse themselves before entering a sacred area. Baths are recorded as part of a village or town life throughout this period, with a split between steam baths in Europe and America and cold baths in Asia. Communal baths were erected in a distinctly separate area to the living quarters of the village, with a view to preventing evil spirits from entering the domestic quarters of a commune.

The third millennium B.C. was the "Age of Cleanliness." Toilets and sewers were invented in several parts of the world, and Mohenjo-Daro circa 2800 B.C. had some of the most advanced, with lavatories built into the outer walls of houses. These were "Western-style" toilets made from bricks with wooden seats on top. They had vertical chutes, through which waste fell into street drains or cesspits. Sir Mortimer Wheeler, the director general of archaeology in India from 1944 to 1948, wrote, "The high quality of the sanitary arrangements could well be envied in many parts of the world today."

Nearly all of the hundreds of houses excavated had their own bathing rooms. Generally located on the ground floor, the bath was made of brick, sometimes with a surrounding curb to sit on. The water drained away through a hole in the floor, down chutes or pottery pipes in the walls, into the municipal drainage system. Even the fastidious Egyptians rarely had special bathrooms. 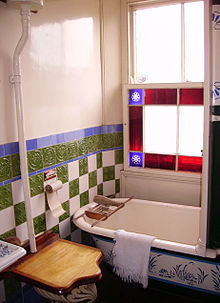 A bathroom in the Beamish Museum near Durham, United Kingdom

Not all ancient baths were in the style of the large pools that often come to mind when one imagines the Roman baths; the earliest surviving bathtub dates back to 1700 B.C, and hails from the Palace of Knossos in Crete. What is remarkable about this tub is not only the similarity with the baths of today, but also the way in which the plumbing works surrounding it differ so little from modern models. A more advanced prehistoric (15th century BC and before) system of baths and plumbing is to be found in the excavated town of Akrotiri, on the Aegean island of Thera. There, alabaster tubs and other bath fittings were found, along with a sophisticated twin plumbing system to transport hot and cold water separately. This was probably because of easy access to geothermic hot springs on this volcanic island. Both the Greeks and the Romans recognised the value of bathing as an important part of their lifestyles. Writers such as Homer had their heroes bathe in warm water so as to regain their strength; it is perhaps notable that the mother of Achilles bathed him in order to gain his invincibility. Palaces have been uncovered throughout Greece with areas that are dedicated to bathing, spaces with ceramic bathtubs, as well as sophisticated drainage systems. Homer uses the word λοετρά, loetrá, "baths", later λουτρά, loutrá, from the verb λούειν, loúein, to bathe. The same root finds an even earlier attestation on Linear B tablets, in the name of the River Lousios ("bathing" [river]), in Arcadia. Public baths are mentioned by the comedian Aristophanes as βαλανεία, balaneía (Sing.: βαλανείον, balaneíon, Latinized as balneum, a "balneary").

The Roman attitudes towards bathing are well documented; they built large purpose-built thermal baths, marking not only an important social development, but also providing a public source of relaxation and rejuvenation. Here was a place where people could meet to discuss the matters of the day and enjoy entertainment. During this period there was a distinction between private and public baths, with many wealthy families having their own thermal baths in their houses. Despite this they still made use of the public baths, showing the value that they had as a public institution. The strength of the Roman Empire was telling in this respect; imports from throughout the world allowed the Roman citizens to enjoy ointments, incense, combs, and mirrors.

Although some sources suggest that bathing declined following the collapse of the Roman Empire, this is not completely accurate. It was actually the Middle Ages that saw the beginning of soap production, proof that bathing was definitely not uncommon. It was only after the Renaissance that bathing declined; water was feared as a carrier of disease, and thus sweat baths and heavy perfumes were preferred.

In fact throughout the 16th, 17th, and 18th centuries, the use of public baths declined gradually in the west, and private spaces were favoured, thus laying the foundations for the bathroom, as it was to become, in the 20th century. However in Japan shared bathing in sento and onsen (spas) still exists; the latter being very popular. 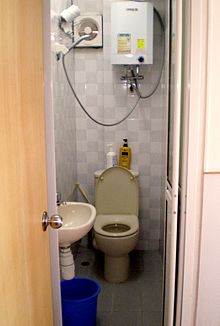 A shower room or shower-room is a room that contains a shower cubicle (or shower stall), but no bathtub. In the United States, this would be called a 3/4 bathroom.

A family bathroom, in British estate agent terminology, is a full bathroom in a house where one or more bedrooms have en-suites.

A Jack and Jill bathroom is a bathroom with two doors, accessible from two bedrooms.

In Australia, New Zealand and other British Commonwealth countries it is common for a bathroom to not contain a lavatory; but with a separate 'toilet' next door (a very small room with only a toilet and perhaps a tiny hand washbasin).

Terminology in the United States

In the United States, bathrooms are generally categorized as master bathroom, containing a shower and a tub that is adjoining to a master bedroom, a "full bathroom" (or "full bath"), containing four plumbing fixtures: bathtub, shower, toilet, and sink; "half (1/2) bath" (or "powder room") containing just a toilet and sink; and "3/4 bath" containing toilet, sink, and shower, although the terms vary from market to market. In some U.S. markets, a toilet, sink, and shower are considered a "full bath". This lack of a single, universal definition commonly results in discrepancies between advertised and actual number of baths in real estate listings. An additional complication is that there are currently two ways of notating the number of bathrooms in a dwelling. One method is to count a half bathroom as ".5" and then add this to the number of full bathrooms (e.g., "2.5" baths would mean 2 full baths and 1 half bath). The other, newer method is to put the number of full bathrooms to the left side of the decimal point and to put the number of half bathrooms to the right of the decimal point (e.g., "2.1" would mean 2 full baths and 1 half bath; "3.2" would mean 3 full baths and 2 half baths).

The design of a bathroom must account for the use of both hot and cold water, in significant quantities, for cleaning the human body. The water is also used for moving solid and liquid human waste to a sewer or septic tank. Water may be splashed on the walls and floor, and hot humid air may cause condensation on cold surfaces. From a decorating point of view the bathroom presents a challenge. Ceiling, wall and floor materials and coverings should be impervious to water and readily and easily cleaned. The use of ceramic or glass, as well as smooth plastic materials, is common in bathrooms for their ease of cleaning. Such surfaces are often cold to the touch, however, and so water-resistant bath mats or even bathroom carpets may be used on the floor to make the room more comfortable. Alternatively, the floor may be heated, possibly by strategically placing heater conduits close to the surface.

Electrical appliances, such as lights, heaters, and heated towel rails, generally need to be installed as fixtures, with permanent connections rather than plugs and sockets. This minimizes the risk of electric shock. Ground-fault circuit interruptor electrical sockets can reduce the risk of electric shock, and are required for bathroom socket installation by electrical and building codes in the United States and Canada. In some countries, such as the United Kingdom, only special sockets suitable for electric shavers are permitted in bathrooms, and are labelled as such. UK Building Regulations also define what type of electrical light fittings (i.e. how water-/splash-proof) may be installed in the areas (zones) around and above baths, sinks and showers.

Bathroom lighting should be uniform, bright and must minimize glare. For all the activities like shaving, showering, grooming etc. one must ensure equitable lighting across the entire bathroom space. The mirror area should definitely have at least two sources of light at least 1 feet apart to eliminate any shadows on the face. Skin tones and hair color are highlighted with a tinge of yellow light.[2]