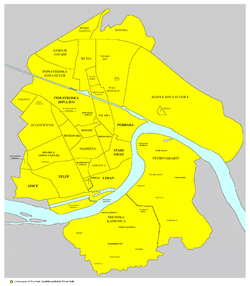 Map of the urban area of Novi Sad with city quarters, showing the location of Detelinara 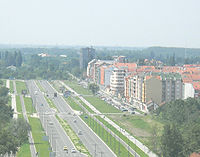 Panoramic view of Detelinara and Subotica Boulevard (Boulevard of Europe)

Detelinara (Детелинара) is a neighbourhood of the city of Novi Sad in the Serbian province of Vojvodina.

The neighbouring city quarters are: Novo Naselje and Jugovićevo in the west, Avijatičarsko Naselje in the north, Sajmište in the south-east, and Banatić and Industrijska Zona Jug in the north-east.

During bombing of Novi Sad in 1999, NATO bombs devastated civilian residential buildings and a school in Detelinara. [1] [2]