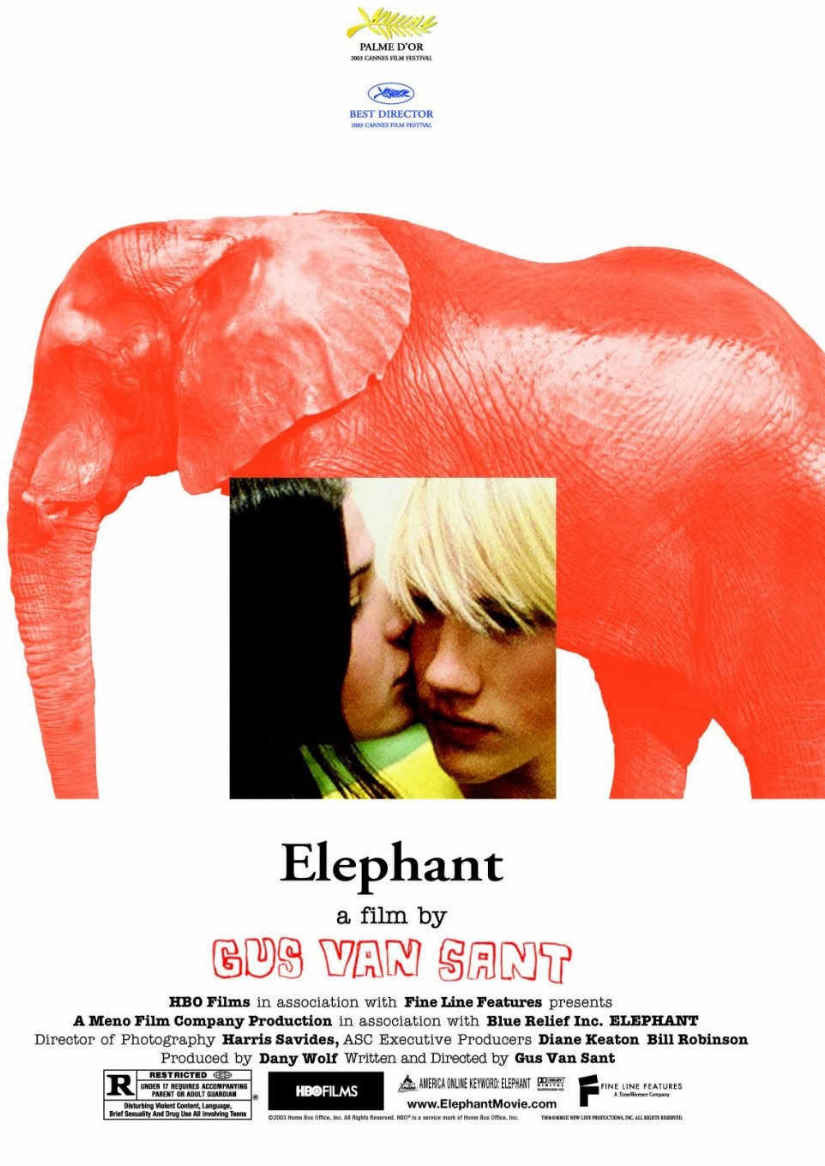 "Elephant" is a 2003 crime- written and directed by . It is set on the day of a massive . The film takes place a short time before the shooting occurs, following several characters as they live out their school lives, unaware of what is about to unfold. The film stars mostly new or non-professional actors, including John Robinson, and .

This is the second movie in Gus Van Sant's - the first is "Gerry" and the third "Last Days"; all three are based on actual events. "Elephant" takes place in the fictional Watt , in the suburbs of Portland, , and chronicles the events surrounding a fictional school shooting, based in part on the 1999 although the end of the film stresses the "similarities to actual events are purely coincidental" disclaimer.

The film was generally acclaimed by critics, and received the prestigious 2003 at the . As the first high-profile movie to address high school shootings since Columbine, the film was controversial for its subject matter and possible influence on teenaged copy-cats. "Elephant" received an R rating from the MPAA for "disturbing violent content, language, brief sexuality and brief drug use, all involving teens".

The film opens with Mr. McFarland () driving erratically down a residential street with his son John (John Robinson) in the passenger seat. It becomes apparent that Mr. McFarland is intoxicated as John instructs him to pull over and let him drive. They arrive at John's high school, where he refuses to give his father the car keys and ends up leaving them in the school office for his brother to collect.

The camera follows other students as they walk down the hallways, talk to friends and go to class. Many characters are shown in long s that do not turn away. Alex () and Eric () are shown being constantly picked on at school by the jocks, several of whom throw spitballs at Alex during science class. Later, Alex and Eric are shown at home ordering weapons from a website and receiving an in the mail. The two are later shown formulating an attack plan. The next day, Alex and Eric kiss in the shower (for the stated reason that they have never kissed someone) before making their way to the school in silence.

After arriving at school, Alex and Eric encounter John outside and warn him to run away. Realizing what is about to happen, John attempts to warn others not to enter the school, to little effect. The two boys then enter the school and after their plans to blow up parts of the school with propane bombs fail, begin shooting indiscriminately. Elias () photographs them entering the library where they open fire, shooting several students, including Michelle and presumably Elias. Realizing that the gunfire is real, students now begin to panic, while teachers attempt to quickly evacuate everyone. The two boys separate, continuing their killing spree. Alex enters the bathroom where Brittany, Jordan, and Nicole are, presumably shooting all three. Benny approaches Eric but is shot with Eric's TEC-9. Mr. Luce pleads to Eric to spare his life, and Eric initially agrees to let him go, but guns him down seconds later.

Alex enters the cafeteria and sits down (where he has apparently already opened fire, as a body can be seen in the background). Eric meets up with him, and they have a brief conversation, after which Alex shoots Eric in mid-sentence. Alex then leaves the cafeteria, showing no emotion over shooting Eric, and discovers Carrie and Nathan in a freezer. He tauntingly recites to them to decide whom he should kill first. The film then ends without resolution; the last shot of the film is similar to the opening, a cloudy blue sky.

* as Alex, a cold, calculating, and ruthless teenager harassed by jocks, accomplished but frustrated pianist and sketch artist.
*Eric Deulen as Eric, a , Alex's friend, and the other killer. He is much less intelligent than Alex, and Alex is obviously aware of this.
*John Robinson as John McFarland, Alex's friend who has trouble at school while managing his father.
* as Mr. McFarland, John's alcoholic father.
* as Mr. Luce, the of the school. Cornered by Eric, who falsely spares him, he is presumed dead after shot several times.
* as Elias, an aspiring student building his portfolio with portraits of other students. Although not shown, presumed shot and killed by Alex in the library.
*Nathan Tyson and as Nathan and Carrie, a popular /American football player and his girlfriend. Both, or one shot and probably killed when Alex corners them in the Cafeteria meat locker, Alex taunts and it is unknown which one he shot, or if the other survived.
* as Michelle, a girl ashamed of her body, the film follows her through the locker room and into the where she assists. She is the first to die during the shooting.
*, , and as Brittany, Jordan, and Nicole, three bulimic teenage girls who talk incessantly, gripe about parents, and squabble with one another. All presumed shot and killed by Alex.
* as Acadia, a close friend of John's and a member of the . She successfully escapes from the school and the shooters.
* as Benny, an athletic student who helps Acadia escape out of a window before approaching Eric. He is shot and presumed dead after trying to help Mr. Luce.

The film began as a that Van Sant had intended to make about the ; eventually, the idea of a factual account was dropped.

Elephant was filmed in Van Sant's hometown of Portland, Oregon in late 2002, on the former campus of Whitaker Middle School (previously Adams High School.) Whitaker was closed by the Portland Public Schools in 2001, due to structural problems and safety concerns with the school building. The Whitaker/Adams building, completed in 1969, was torn down in 2007.

The script was "written" to its final form during shooting, with cast members improvising freely and collaborating in the direction of scenes. The result is described by reviewers as "poetic" and "dreamlike", and by Van Sant himself as a rejection of conventional , building on what he learned from work on "Gerry".

is credited as an associate producer for the film. JT is a pen name for author .

The title is a tribute to the 1989 film of the same name, directed by , which reflects on in . Van Sant's minimalist style and use of tracking shots mirrors Clarke's film. [ [http://www.villagevoice.com/film/0436,lim,56529,20.html "Village Voice"] ] [ [http://www.filmmakermagazine.com/archives/online_features/cannes2003.php filmmakermagazine.com] ] Clarke used the title to refer to the phrase "" - a reference to the collective denial of some very obvious problem. It has been speculated that it was really named after the symbol of the Republican Party in the United States, which supports the and easy access to firearms for anyone.

"Elephant" premiered in at a benefit for the youth shelter in Portland, at the Arlene Schnitzer Concert Hall, in , on Saturday, , , with several teenagers who appeared in the film in attendance.

The film was released for incremental distribution by HBO, in 100 theaters in the , beginning , . release on and began on , .

The music of Beethoven, which was used in the film, is transposed up almost a full semitone, i.e. Moonlight Sonata mv.1 was played in Dm, and Fur Elise was played in A#m.

The 2005 was briefly blamed on the film "Elephant" as it was watched by 17 days prior to the shooting. [http://www.cbsnews.com/stories/2005/03/30/national/main683990.shtml] A friend of Weise said that he brought the movie over to a friend's house and skipped ahead to parts that showed two students planning and carrying out a school massacre, although they talked about the film afterwards Jeffrey Weise said and did nothing to make anyone suspect what he was planning. [" [http://web.archive.org/web/20070503084900/http://www.ktvotv3.com/Global/story.asp?S=3126813 Suspected Red Lake shooter watched movie about a school attack ] ." "".]