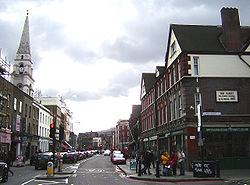 Commercial Street, looking south. The spire of Christ Church is to the left, Spitalfields Market to the right. (February 2007)

Commercial Street is a road in Tower Hamlets, east London that runs north to south from Shoreditch High Street to Whitechapel High Street through the East End district of Spitalfields. The road is on the London Inner Ring Road and as such forms part of the boundary of the London congestion charge zone.

As the name implies, Commercial Street has historically been dominated by industrial and commercial activity. It is on the City fringes, and much industry that was seen as too noisome for the City was once exiled to such areas as this. However, since the early 1990s the street has grown increasingly more fashionable.

The district was historically one of the poorest, most overcrowded and most crime-ridden in London: a parliamentary report of 1838 described it as harbouring "an extremely immoral population; women of the lowest character, receivers of stolen goods, thieves and the most atrocious offenders".[1] The southern section of Commercial Street was created in 1843-5 as part of a slum clearance programme, and to connect the Whitechapel thoroughfare with Spitalfields Market.[2] It was laid out by the architect and planner Sir James Pennethorne along the approximate line of former Essex Street, Rose Lane and Red Lion Street, and entailed the demolition of some 250 sub-standard properties in Whitechapel and Spitalfields. The extension north from the market, to the Eastern Counties Railway's Bishopsgate terminus and to Shoreditch High Street, was made in 1849-57 and opened in 1858.[3][4] In both phases of development there was some initial difficulty in finding tenants for the building plots, and much of the street was not built up until the 1860s and 1870s. Only once Great Eastern Street had been laid out further north in 1872-6, creating a continuation of the route towards Old Street and the City Road, did Commercial Street really begin to succeed as what had always been Pennethorne's aim, an artery allowing traffic to bypass the City of London.

Until the late twentieth century, the street was heavily dominated by the activities of Spitalfields wholesale fruit and vegetable market, and by outlets for the 'rag trade' (the wholesale clothing and textile trade). Since the mid-1970s, however, the area has been increasingly subject to a process of gradual gentrification. In part, this reflects the changing character of Spitalfields more generally, but in Commercial Street in particular it was stimulated by the departure of the market in 1991 (and subsequent redevelopment of its buildings), the arrival of a number of private residential developments (especially at the northern end of the street), and the introduction of some modest traffic-calming measures. Many of the commercial units in the street are now occupied by fashionable clothing shops or restaurants.

The street's most significant features are Hawksmoor's grand Christ Church, on the corner of Fournier Street; and (almost opposite) Spitalfields Market, the old fruit and vegetable market that is now bustling again after a long period of uncertainty. Both the market buildings and Christ Church are lucky survivors, as demolition has loomed for both of them at one point or another. 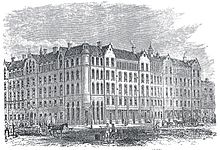 The Peabody dwellings in Commercial Street: a wood-engraving published in the Illustrated London News in 1863, shortly before the building opened.

The northern end of the street is dominated by the sprawling Exchange Building, an old Art Deco tobacco works; and the former Commercial Street Police Station (built 1874-5, with an extra storey added in 1906). Both are now residential. Nearby, with a wing extending into Folgate Street, is the first tenement block of model dwellings to be erected by the Peabody Donation Fund (now the Peabody Trust) for London's "industrious poor". The red-brick Jacobethan block was designed by H.A. Darbishire and opened in 1864, but was sold by the Trust in the late 1970s, and is now a private residential block named The Cloisters.

On the opposite corner of Fournier Street from Christ Church is the Ten Bells, a pub that is intimately associated with Jack the Ripper, as two of his female prostitute victims frequented the establishment. Many Ripper tours (a thriving industry) start out nearby. Although the pub has long been refurbished, it still retains some fine original tilework. Prostitution is still a feature of Commercial Street to this day, although considerably less evident than it was even at the turn of the millennium.[5][6]

Much of the southern section of the street is occupied by warehouse buildings of the 1860s. Wentworth Street (part of the busy Petticoat Lane Market) runs off Commercial Street to the west. On the eastern side of the street stands Toynbee Hall, the university settlement founded in 1884. At the southern end towers Ibis London City budget hotel, which opened in 2005.