The Patriarchate traces its line of succession to the first Christian bishops of Jerusalem, the first being James the Just in the 1st century AD. Jerusalem was recognized as a patriarchate at the Council of Chalcedon in 451.

On the importance of Jerusalem, the Catholic Encyclopedia reads:

"During the first Christian centuries the church at this place was the centre of Christianity in Jerusalem, 'Holy and glorious Sion, mother of all churches.' Certainly no spot in Christendom can be more venerable than the place of the Last Supper, which became the first Christian church."[2]

In the Apostolic Age the Christian Church was organized as an indefinite number of local Churches that in the initial years looked to that at Jerusalem as its main centre and point of reference, see also Jerusalem in Christianity. James the Just, who was martyred around 62, is described as the first Bishop of Jerusalem. Roman persecutions following the Jewish revolts against Rome in the later 1st and 2nd centuries also impacted the city's Christian community, and led to Jerusalem gradually being eclipsed in prominence by other sees, particularly those of Antioch, Alexandria, and Rome. However, increased pilgrimage during and after the reign of Constantine the Great increased the fortunes of the see of Jerusalem, and in 325 the First Council of Nicaea attributed special honor, but not Metropolitan status (then the highest rank in the Church), to the bishop of Jerusalem.[3] Jerusalem continued to be a bishopric until 451, when it was raised to the status of patriarchate by the Council of Chalcedon. After that it was considered one of the Pentarchy – the five most prominent sees in Christendom.

In 1099 the Crusaders appointed a Latin Patriarch. 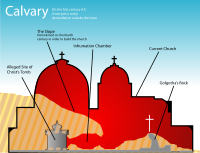 A diagram of the Church of the Holy Sepulchre based on a German documentary, claimed to be the site of Calvary and the Tomb of Jesus

Today, the headquarters of the patriarchate is the Church of the Holy Sepulchre in Jerusalem.

The number of Orthodox Christians in the Holy Land is estimated to be about 200,000 people. A majority of Church members are Palestinian Arabs, and there are also small numbers Russians, Romanians, and Georgians.

The patriarchate was recently involved in a significant controversy. Patriarch Irenaios, elected in 2001, was deposed, on decisions of the Holy Synod of Jerusalem, in the aftermath of a scandal involving the sale of church land in East Jerusalem to Israeli investors. The move enraged many Orthodox Palestinian members, since the land was in an area that most Palestinians hoped would someday become part of a Palestinian state. On May 24, 2005 a special Pan-Orthodox Synod was convened in Constantinople (İstanbul) to review the decisions of the Holy Synod of Jerusalem. The Pan-Orthodox Synod under the presidency of the Ecumenical Patriarch Bartholomew I, voted overwhelmingly to confirm the decision of the Brotherhood of the Holy Sepulchre and to strike Irenaios' name from the diptychs, and on May 30, Jerusalem's Holy Synod chose Metropolitan Cornelius of Petra to serve as locum tenens pending the election of a replacement for Irenaios. On August 22, 2005, the Holy Synod of the Church of Jerusalem unanimously elected Theophilos, the former Archbishop of Tabor, as the 141st Patriarch of Jerusalem.

The early Christian community of Jerusalem was led by a Council of Elders, and considered itself part of the wider Jewish community.[citation needed] This collegiate system of government in Jerusalem is seen in Acts 11:30 and 15:22.

Eusebius of Caesarea provides the names of an unbroken succession of thirty-six Bishops of Jerusalem up to the year 324.[4] The first sixteen of these bishops were of Jewish origin Christians—from James the Just through Judas († 135)—the remainder were Gentiles:

"But since the bishops of the circumcision ceased at this time [after Bar Kokhba's revolt], it is proper to give here a list of their names from the beginning. The first, then, was James, the so-called brother of the Lord; the second, Symeon; the third, Justus; the fourth, Zacchaeus; the fifth, Tobias; the sixth, Benjamin; the seventh, John; the eighth, Matthias; the ninth, Philip; the tenth, Seneca; the eleventh, Justus; the twelfth, Levi; the thirteenth, Ephres; the fourteenth, Joseph; and finally, the fifteenth, Judas. These are the bishops of Jerusalem that lived between the age of the apostles and the time referred to, all of them belonging to the circumcision."[5] 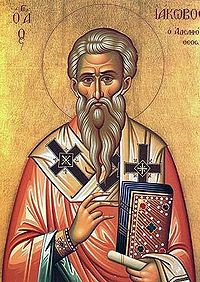 James the Just, whose judgment was adopted in the Apostolic Decree of Acts 15:19-29, "...we should write to them [Gentiles] to abstain only from things polluted by idols and from fornication and from whatever has been strangled and from blood..." (NRSV)

As a result of the Bar Kokhba revolt in 135, Hadrian was determined to erase Judaism from Iudaea Province. The province was renamed Syria Palaestina. Jerusalem was left in total ruin, and a new city built nearby called Aelia Capitolina. These gentile bishops (Jews were excluded from the city except for the day of Tisha B'Av), were appointed under the authority of the Metropolitans of Caesarea. Until the setting up of the Patriarchates in 325, Metropolitan was the highest episcopal rank in the Christian church.

Jerusalem received special recognition in Canon VII of First Council of Nicaea in 325, without yet becoming a metropolitan see.[6] Also, the Council for the first time established the Patriarchates. The Bishops of Jerusalem were appointed by the Patriarchs of Antioch.

The Council of Chalcedon in 451 raised the bishop of Jerusalem to the rank of patriarch. (See Pentarchy) However, Byzantine politics meant that Jerusalem passed from the jurisdiction of Patriarch of Antioch to the Greek authorities in Constantinople. For centuries, Orthodox clergy, such as the Brotherhood of the Holy Sepulcher, dominated the Jerusalem church. At the same time, the Roman church claimed primacy. (See Papal supremacy)

Patriarchs of Jerusalem in exile

As a result of the First Crusade in 1099, a Latin Patriarchate was created, with residence in Jerusalem from 1099 to 1187. Orthodox Patriarchs continued to be appointed, but resided in Constantinople.

Return of Patriarchs of Jerusalem

Hierarchy of the Throne