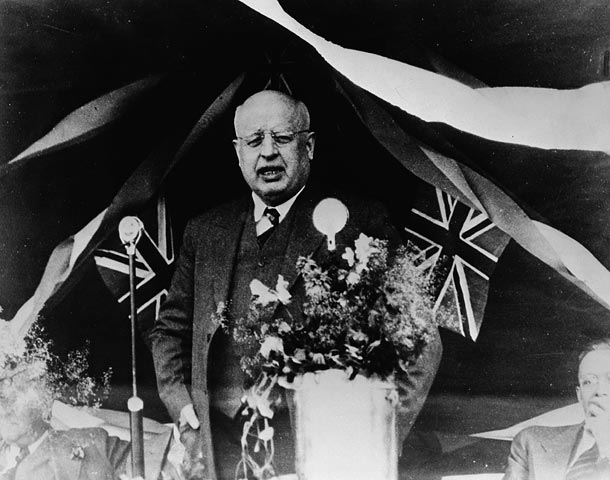 William Aberhart (, &ndash; , ), also known as Bible Bill for his religious preaching, was a Canadian politician and Social Credit Premier of between 1935 and 1943.

William Aberhart was born on a farm near Kippen, . His parents were members of the Presbyterian church where William received his early Sunday School Training".(for presbyterian connections see The Social Credit Movement in Alberta by John A. Irving. U of T. Press, 1959 pp. 8,9 )" He attended a local public school and several colleges, receiving teacher's training. In 1911, he earned a degree from Queen's University in . Aberhart taught public school in several areas in Southern Ontario, including Wingham and Brantford, and was appointed Principal of Brantford Central Public School in 1905. During his time in Brantford, he volunteered much time to his devout faith, preaching at various local churches and holding regular studies.

In 1902, Aberhart married Jessie Flatt, with whom he had two daughters, Ola Janet and Khona Louise. He had aspired to take ministerial training at the Presbyterian Knox College Divinity School, but the church in Brantford was reluctant to take on the support of both him and his family in the four year training period. He became fascinated with prophetical teaching in the Bible and studied a correspondence course by the American evangelical teacher, Dr. C.I. Scofield. He had been introduced to this system while attending a men's Bible Class at Zion Presbyterian, taught by Wiiliam Nichol, an elderly physician. "( source of church training found in Aberhart of Alberta by L.P.V. Johnson and Ola McNutt, Coop Press, Edmonton, 1970. pp. 26,27)"In 1910, Aberhart accepted a position as principal of Alexandra School in , . His initial Bible Study Teaching in Calgary commenced at the Grace Presbyterian Church at the Young Men's Bible Class. Within a few weeks attendance was over 100 and he attracted the attendance of the senior minister Dr. Esler, but his views on prophesy did not jibe with senior minister's reformed beliefs and his teaching privileges were cancelled. He then moved on to teach successively at the Wesley and Trinity Methodist Churches.(See Aberhart of Alberta, pp. 50,51) Although seeds of his interest in the faith had been planted while in Ontario, it was not until his involvement with Westbourne Baptist Church in Calgary as a lay preacher, that he and his wife were baptised in the Baptist faith. In 1918, Aberhart began a Bible study group in Calgary, Alberta which grew steadily year-by-year; by 1923, the Palace Theatre had to be rented to accommodate those interested in Aberhart's message. In 1925, radio station CFCN broadcast his Sunday sermons for the first time, taking his prophetic message beyond the confines of a theatre to listeners across the Prairies. In 1927, Aberhart was appointed Dean of the newly-founded . The institute's building served as a centre of worship, radio broadcast, and biblical studies. Aberhart's Sunday broadcasts proved as popular as his Bible studies as they drew regular listeners across the Canadian mid-west, and some listeners in the northern United States.

Aberhart became interested in politics during the , a time which was especially harsh on Albertan and Saskatchewan farmers. Particularly, he was drawn to the "" theories of Major , a British engineer. From 1932 to 1935, Aberhart lobbied for the governing political party, the , to adopt these theories. The basis of social credit is that the difference in production cost and individuals' purchasing power should be supplemented through government grants. When these efforts failed, Aberhart helped found the , which won the 1935 provincial election by a landslide with over 54% of the popular vote. The Social Credit Party remained in power in the province until the 1971 election, though it moved away from Douglas' monetary theories after Aberhart's death in 1943. Aberhart served as , Minister of Education and, starting in 1937, during his tenure with the party.

His government was unable to implement much of the party platform since the concept relied on control of the money supply and of the banks, both of which are a responsibility of the federal government of Canada under the . refused to give to three government bills in 1937. Two of the bills would have put the province's banks under the control of the provincial government, while a third, the "Accurate News and Information Act", would have forced newspapers to print government rebuttals to stories the provincial objected to. All three bills were later declared unconstitutional by the and the .

In 1938, relations with the Lieutenant-Governor became so strained that Bowen even threatened to dismiss Aberhart's government, which would have been an extraordinary use of his . The Social Credit government remained immensely popular with the Albertan people, however, so the threat was not carried out. Aberhart's government was re-elected in the 1940 election, although with only about 43% of the vote.

Although Aberhart was unable to gain complete control of Alberta's banks, his government eventually gained a foothold in the province's financial industry by creating the in 1938. ATB has become Aberhart's legacy, operating as an orthodox and .

Aberhart died unexpectedly on , , during a visit to . He was succeeded as the Premier of Alberta by his student at the Prophetic Bible Institute and lifelong close disciple, .

The Aberhart Centre, a long-term medical care centre in , is named in his honour, as is in Calgary.