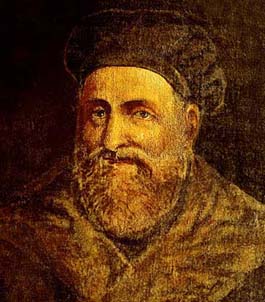 Gabriele Falloppio ( - , ), often known by his name Fallopius, was one of the most important anatomists and s of the sixteenth century.

He was born at and died at . His family was noble but very poor and it was only by a hard struggle he succeeded in obtaining an education. Financial difficulties led him to join the , and in 1542, he became a canon at Modena's . He studied medicine at Ferrara, at that time one of the best medical schools in Europe. He received his MD in 1548 under the guidance of . After taking his degree he worked at various medical schools and then became professor of anatomy at Ferrara, in 1548. was one of his famous students. He was called the next year to Pisa, then the most important university in Italy. In 1551 Falloppio was invited by Cosimo I, Grand Duke of Tuscany, to occupy the chair of anatomy and surgery at the . He also held the professorship of and was superintendent of the botanical gardens. Though he died when less than forty, he had made his mark on anatomy for all time.

This was the golden age of anatomy and Falloppio's contemporaries included such great anatomists as , Eustachius, and (whom he succeeded at Padua). It has sometimes been asserted that he was jealous of certain of the great discoverers in anatomy and that this is the reason for his frequent criticisms and corrections of their work. However, , an authority in medical history, declared that Falloppio was noted for his modesty and deference to his fellow workers and especially to Vesalius. His purpose in suggesting corrections, therefore, was the advance of the science of anatomy.

Falloppio's own work dealt mainly with the anatomy of the head. He added much to what was known before about the internal ear and described in detail the tympanum and its relations to the in which it is situated. He also described minutely the circular and s (fenestræ) and their communication with the vestibule and . He was the first to point out the connection between the and the . His description of the lachrymal passages in the was a marked advance on those of his predecessors and he also gave a detailed account of the and its cells in the nose. His contributions to the anatomy of the s and s were very valuable. It was in particularly that he corrected Vesalius. He studied the s in both sexes, and described the , which leads from the to the and now bears his name. The aquæductus Fallopii, the canal through which the passes after leaving the , is also named after him .

His contributions to practical medicine were also important. He was the first to use an aural for the diagnosis and treatment of diseases of the ear, and his writings on surgical subjects are still of interest. He published two treatises on s and s, a treatise on surgery, and a commentary on 's book on wounds of the head. In his own time he was regarded as somewhat of an authority in the field of sexuality. His treatise on advocated the use of s, and he initiated what may have been the first of the device. Falloppio was also interested in every form of therapeutics. He wrote a treatise on baths and thermal waters, another on simple purgatives, and a third on the composition of drugs. None of these works, except his "Anatomy" (, 1561), were published during his lifetime. As we have them, they consist of manuscripts of his lectures and notes of his students. They were published by (, 1575).