Chennai Mathematical Institute (CMI) is a research and education institute in Chennai, India. It was founded by the SPIC Science Foundation in 1989, and offers undergraduate as well as postgraduate programmes in physics, mathematics and computer science, besides its key strength in the form of high-end research in mathematics.[2] CMI is noted for its research in the field of algebraic geometry, in particular in the area of moduli bundles.[3]

In December 2006, CMI was recognized as a university under Section 3 of the UGC Act 1956, making it a deemed university.[2] Until then, the teaching program was offered in association with Bhoj Open University, as it offered more flexibility. 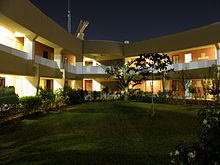 From its inception, the institute has had a Ph.D programme in Mathematics and Computer Science. In the initial years, the Ph.D programme was affiliated to the Birla Institute of Technology and Science, Pilani and the University of Madras. In December 2006, CMI was recognized as a university under Section 3 of the UGC Act 1956.[5]

In 2010, CMI launched a summer fellowship programme whereby they invited about 30 students from all over India to work under a faculty at CMI on a research project. 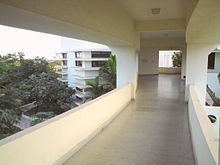 CMI moved into its new campus on 5 acres (20,000 m2) of land at the SIPCOT Information Technology Park in Siruseri in October, 2005. The campus is located along the Old Mahabalipuram Road, which is developing as the IT corridor to the south of the city. The campus was designed by architect K.S. Ranganath.[4]

The library block and the student's hostel were completed in late 2006 and become operational from January 2007.

In 2006, CMI implemented grey water recycling system on its campus. The system was designed for CMI by Sultan Ahmed Ismail to treat waste water produced after cleaning, washing and bathing to be used for gardening or ground water recharge.[7] 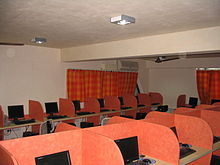 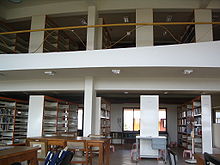 CMI has Ph.D programmes in Computer Sciences, Mathematics and Physics. Recently, CMI has introduced the possibility of students pursuing a part-time PhD at the Institute.[8]

Since 1998, CMI has offered a B.Sc. (Hons) degree in Mathematics and Computer Science. This three-year program also includes courses in humanities and physics.[9] Many students, after completion of the B.Sc. degree, have pursued higher studies in Mathematics and Computer Sciences from universities both in India and abroad. Some students also go into industry while others take up subjects such as finance.[10]

In 2003, CMI offered a B.Sc. (Hons) degree in Physics. This is also a three-year course. The course topics are largely in theoretical physics. CMI now has its own physics laboratory. From the academic year 2007-2008, the Physics students will have regular lab courses right from the first year.[11] In the academic year 2005-2006, lab sessions for third-year students were conducted at IIT Madras based on an agreement.[citation needed] In the summer following their first year, physics students go to HBCSE (under TIFR) in Mumbai for practical sessions and in the second year, they go to IGCAR, Kalpakkam.[12]

In 2001, CMI began separate M.Sc. degrees in Mathematics and in Computer Science.

Degrees for the B.Sc. and M.Sc. programmes were earlier offered by MPBOU, the Madhya Pradesh Bhoj Open University and doctoral degrees were offered by Madras University. Now that CMI is a deemed university, it gives its own degrees. CMI awarded its first official degrees in August 2007.

The batch sizes typically vary from five to fifteen and the overall strength of CMI is about 60–70 students and 30–40 faculty members.[citation needed]

All the CMI programmes are run in conjunction and coordination with programmes at IMSc, an institute for research in mathematics, theoretical computer science and theoretical physics, located in Chennai. 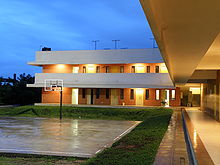 Students who have passed the Indian National Mathematics Olympiad get direct admission for the B.Sc. (Hons) in Mathematics course, and those who have passed the Indian National Physics Olympiad are offered direct entry to the B.Sc. (Hons) in Physics Course. However, these students are also advised to fill in and send the application form some time in March.[14]

Students who pass the Indian National Olympiad in Informatics may be granted admission to the B.Sc. (Hons) Mathematics course. Admission is not guaranteed but is decided on a case-by-case basis by the admissions committee.[citation needed]

Fee structure and other payments

All students, including undergraduate students, are given a stipend to meet their monthly expenses. The tuition fees are waived. Students have to maintain a good academic record for the continuation of their stipend and fee waiver. All students are required to pay hostel and mess fees. 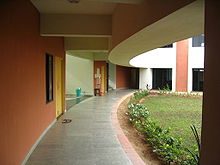 The founding director of CMI C.S.Seshadri, who has worked in the area of algebraic geometry especially moduli problems and algebraic groups, stepped down from his Directorship of the Chennai Mathematical Institute (CMI) on Friday, the 31st December 2010. However, he will continue to be a part of CMI as "Director-Emeritus" from 1 January 2011 onwards.

The research activity in computer science at CMI has been primarily in computational complexity theory, specification and verification of timed and distributed systems and analysis of security protocols.[15] Computer scientist at CMI extended the deterministic isolation technique for reachability in planar graphs to obtain better complexity upper bounds for planar bipartite matching.

CMI faculty coordinate the training and selection of students to represent India at the International Olympiad in Informatics through the Indian Association for Research in Computer Science (IARCS). CMI hosts the official IARCS website. From September 2004, a monthly online programming competition has been conducted by the CMI faculty via the IARCS website.[15] Two of CMI's faculty members, Madhavan Mukund and Narayan Kumar, lead the Indian team to the International Olympiad in Informatics (IOI). Madhavan Mukund is also the National Coordinator for the Indian Computing Olympiad[citation needed]. 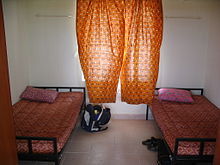 Typical room in the hostel

The on-campus hostel was opened in January 2007. All students are required to stay in the hostel.[17]

Arrangements with other institutes

CMI's funding comes from both private and government sources.