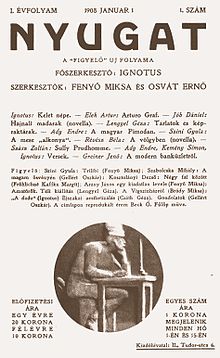 Nyugat (lit. "West" in English, pronounced similar to New-Got), was the most influential Hungarian literary journal in the first half of the 20th century. Writers and poets from that era are referred to as "1st/2nd/3rd generation of the NYUGAT".

It was founded in 1908 and initially edited by Ignotus (Hugo Veigelsberg), Ernő Osvát, and Miksa Fenyő. It was receptive and inspired by the styles and philosophies then current in Western Europe, including naturalism, Symbolism, and impressionism. Nyugat published both poetry and prose writing.

During World War I, Nyugat, challenged by leftist literary circles, became frustrated and depressed about the war.

The NYUGAT periodical, the first Hungarian language periodical to discuss philosophers such as Nietzsche and Kierkegaard, had a significant impact upon scientists and intellectuals who became well known outside Hungary.