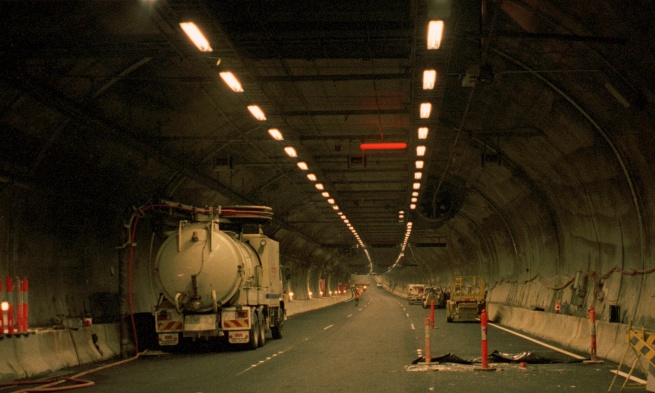 The Burnley Tunnel is a tunnel in , , which carries traffic eastbound from the to the . It is part of the Tollway operated by . Running under the and the inner suburbs of Richmond and Burnley, the tunnel provides a bypass of the central business district.

The tunnel was constructed between and by - Joint Venture. Prior to its opening to traffic, the tunnel was opened to the public to walk through from Southbank to Burnley, on , .

The tunnel was opened to traffic on December 22, 2000. In February 2001 it was found that a wall panel was cracked with 5 litres of water a second entering the tunnel. [cite web
url=http://www.abc.net.au/7.30/stories/s250493.htm
title=Mysterious crack floods Melbourne's CityLink tunnel
work=7.30 Report
date=22/2/2001
publisher=www.abc.net.au
accessdate=2008-07-08] The cause was later found to be floor sections lifting from water pressure, and modifications to correct this being approved in November 2001. Also in 2001 Transfield Obayashi Joint Venture agreed to pay Transurban $157 million in damages in an out-of-court settlement over late completion of the tunnel. [cite web
url=http://tollroadsnews.info/artman/publish/article_1701.shtml
title=Melbourne CityLink Burnley Tunnel cost fight
date=2007-01-22
publisher=tollroadsnews.info
accessdate=2008-07-08]

On just before 10 am, a pile-up occurred in the tunnel involving three trucks and four cars. The crash resulted in an explosion and a subsequent fire which reached temperatures in excess of 1000 degrees Celsius (1800 °F) according to firefighters,

The accident occurred after a truck broke down in the left hand lane. Safety systems allegedly closed the left lane and a response vehicle was on its way to assist the broken-down truck. Two cars travelling in the left hand lane had come up behind the broken-down truck and were attempting to merge into the centre lane. Another truck travelling in the left lane came up behind them and also attempted to merge to the right, but it failed to either stop behind the stationary vehicles or merge successfully. It then collided with vehicles in both the left and middle lanes, resulting in a multi-vehicle pile up involving 4 cars and three trucks. It is believed an explosion resulted from the ignition of a ruptured fuel tank of a vehicle involved in the crash. [http://www.theage.com.au/articles/2007/03/23/1174597890512.html Other reports] of the details vary, however.

The following traffic came to a stop and approximately 200 vehicles became stranded inside the tunnel. The Public Address & Radio Rebroadcast Systems advised motorists to turn off their ignition, leave the keys in, and to evacuate the tunnel. Emergency exits are located throughout the tunnel and lead to separate pedestrian tunnels. Some motorists walked the 1km back along the roadway to the western tunnel entrance. Approximately 400 people were evacuated, three of whom were taken to hospital. Hundreds waited at the tunnel's west entrance until emergency services advised it was safe to remove their vehicles. The tunnel suffered some damage to cables and other internal infrastructure, but is believed the structure was undamaged by the fire.

84 firefighters responded within 5 minutes of the crash occurring, emergency personnel were able to gain access to the Burnley tunnel on foot via a separate emergency tunnel linking the Burnley to the Domain tunnel. Fire hoses were carried through to the crash site while emergency vehicles were stationed in the Domain Tunnel. A number of fire appliances were transported contra-flow from the exit portal of the tunnel to the crash site. The fire was estimated to have burned in excess of 1000 degrees Celsius at its peak, the deluge system was activated instantly and this was deemed by firefighters to have greatly aided in keeping the fire under control. The smoke extraction system functioned as planned and removed toxic fumes from the tunnel and out into the open air. Smoke was vented to the ventilation stack in Southbank.

Metropolitan Ambulance Service Paramedics were sent in to treat evacuees if required. emergency medical teams were also put on standby in case the accident was deemed as a major disaster and many more injured and fatalities had arisen.

A variable speed limit applies to traffic in the tunnel. In normal circumstances the speed limit is 80 km/h, but a 40 km/h speed limit applies during maintenance. The speed limit during peak periods is often reduced to 60 km/h to prevent unnecessary congestion at the . Regular radio transmissions can be received while in the tunnel because many radio stations have installed their own transmitters. Normal radio broadcasts can be interrupted by management announcements over all channels.