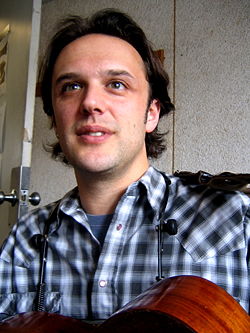 Mark Erelli (born 1974) is an American folk singer/songwriter from Reading, Massachusetts. He currently resides in Massachusetts. Erelli is a 1996 graduate of Bates College, where he majored in Biology, and holds a Master's Degree in Organismic and Evolutionary Biology from the University of Massachusetts (UMass).

His album, Delivered, is a new venture with producer Zack Hickman, who is best known for his bass work in Josh Ritter's band. It features a number of different sounds from previous albums, both instrumental (Hammond B3 and a horn section) and levels ("Shadowland"), but still showcases Erelli's expert songwriting. Most notably are "Not Alone" and "Man of the Family."

His album, Hope & Other Casualties, is a collection of folk and Americana songs with stylistic arrangements, including "The Only Way", written in response to the September 11, 2001 attacks and covered by Ellis Paul and Vance Gilbert.

Hope & Other Casualties was selected as the 2006 Album of the Year by the staff and members of WUMB Boston Folk Radio. Also in 2006 he co-wrote a song inspired by Hurricane Katrina with Catie Curits called "People Look Around," which would win the Grand Prize of the International Songwriting Contest.

On Compass & Companion, Erelli partnered with Kelly Willis for the title song.

He regularly tours in support of Kris Delmhorst, Lori McKenna and Catie Curtis, playing acoustic and electric guitar, mandolin, and lap steel. In June 2007 he toured through the US and Canada supporting Lori McKenna on guitar, mandolin and backing vocals during the Tim McGraw & Faith Hill Soul2Soul 2007 tour.

Erelli has worked with producer Lorne Entress and co-produced Hillbilly Pilgrim and Hope & Other Casualties.

His work was featured in the winter of 2009 in the Reading Memorial High School's Drama Club's production of The Laramie Project. He graduated from RMHS in 1992.

In March 2009 Mark took part in the Darwin Song Project, a multi-artist songrwriting retreat organised by the Shrewsbury Folk Festival to create songs that had a 'resonance and relevance' to Darwin. A CD was released in August 2009