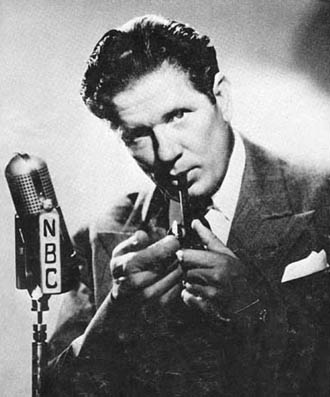 Born Robin Burn in , he was three years old when the Burn family moved to . Before the age of 12, he was playing trombone and cornet in Van Buren's Queen City Silver Cornet Band. At 13, he formed his own string band. Practicing in the back of Hayman's Plumbing Shop one night, he picked up a length of gas pipe and blew into it, creating an unusual sound. With modifications, this became a musical instrument he named a bazooka (after "bazoo," meaning a windy fellow, from the Dutch "bazuin" for "trumpet"). [ [http://livedesignonline.com/mag/lighting_word_play/ Weiner, Richard. "Word Play", Live Design, January 1, 1999.] ] A photograph shows him playing his invention in the Silver Cornet Band. [ [http://www.vanburen.org/bob_burns.php "Bob Burns, the Arkansas Traveler"] ]

Word spread about his rustic homemade instrument fashioned from stove pipes and a whiskey funnel. [ [http://listserv.linguistlist.org/cgi-bin/wa?A2=ind0703D&L=ADS-L&P=R3610&I=-3 "Waukeesha Freeman", January 17, 1918] ] Burns found fame with his novelty instrument on radio programs of the 1930s and 1940s, and World War II s nicknamed their handheld anti-tank rocket launchers after the physical similarity to Burns's instrument. Functioning like a crude , the musical bazooka had a narrow range and less-than-dulcet tone, but this was intentional, since Burns used the instrument as a prop while telling his comic stories and jokes.

On radio Burns became known by nicknames "The Arkansas Traveler" and "The Arkansas Philosopher." His radio personality was that of a low-key, self-effacing, rustic bumpkin with a grabbag of amusing stories about "the kinfolks" back home in Van Buren. His character was patterned after (1806-74), composer of the popular fiddle tune, "The Arkansas Traveler."

After a period on Los Angeles local radio, he reached a national audience in 1935 on the Paul Whiteman and Rudy Vallee radio programs and then became a regular on 's "", hosting the show when Crosby was on vacation and telling tall tales about his fictional hillbilly relatives, Uncle Fud and Aunt Doody. He remained with the "Kraft Music Hall" until 1941 when his popularity with the heartland radio audience led to his own radio series, "The Arkansas Traveler" (1941-43) and "The Bob Burns Show" (1943-49).

From 1936 to 1940 he wrote a newspaper column, "Well, I'll Tell You," essentially a column filler with brief homespun anecdotes. The daily feature was syndicated to 240 U.S. newspapers.

His television appearances during the 1950s included Ed Sullivan's "Toast of the Town" (, ). A wealthy man due to land investments, Burns' final years were spent on his 200-acre model farm in . He died from in at the age of 65.