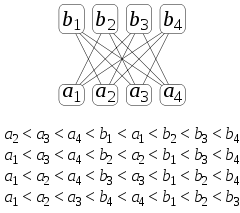 A partial order of dimension 4 (shown as a Hasse diagram) and four total orderings that form a realizer for this partial order.

It can be shown that any nonempty family R of linear extensions is a realizer if and only if, for every critical pair (x,y) of P, y <i x for some order <i in R.

Let n be a positive integer, and let P be the partial order on the elements ai and bi (for 1 ≤ i ≤ n) in which ai ≤ bj whenever i ≠ j, but no other pairs are comparable. In particular, ai and bi are incomparable in P; P can be viewed as an oriented form of a crown graph. The illustration shows an ordering of this type for n = 4.

Then, for each i, any realizer must contain a linear order that begins with all the aj except ai (in some order), then includes bi, then ai, and ends with all the remaining bj. This is so because if there were a realizer that didn't include such an order, then the intersection of that realizer's orders would have ai preceding bi, which would contradict the incomparability of ai and bi in P. And conversely, any family of linear orders that includes one order of this type for each i has P as its intersection. Thus, P has dimension exactly n. In fact, P is known as the standard example of a poset of dimension n, and is usually denoted by Sn.

It is possible to determine in polynomial time whether a given finite partially ordered set has order dimension at most two, for instance, by testing whether the comparability graph of the partial order is a permutation graph. However, for any k ≥ 3, it is NP-complete to test whether the order dimension is at most k (Yannakakis 1982).