In chemistry the polyhedral skeletal electron pair theory provides electron counting rules useful for predicting the structures of clusters such as borane and carborane clusters. The electron counting rules were originally formulated by Kenneth Wade and were further developed by D. M. P. Mingos and others; they are sometimes known as Wade's rules or the Wade/Mingos rules. The rules are based on a molecular orbital treatment of the bonding.[1][2][3][4]. Recently these rules are extended and unified for macropolyhedral boranes, metallocenes and borides. The unified electron counting rules are called Jemmis mno rules.[5][6]

Different rules (4n, 5n, or 6n) are invoked depending on the number of electrons per vertex.

The 4n rules are reasonably accurate in predicting the structures of clusters having about 4 electrons per vertex, as is the case for many boranes and carboranes. For such clusters, the structures are based on deltahedra, which are polyhedra in which every face is triangular. The 4n clusters are classified as closo-, nido-, arachno- or hypho-, based on whether they represent a complete (closo-) deltahedron, or a deltahedron that is missing one (nido-), two (arachno-) or three (hypho) vertices.

However, hypho clusters are relatively uncommon due to the fact that the electron count is high enough to start to fill antibonding orbitals and destabilize the 4n structure. If the electron count is close to 5 electrons per vertex, the structure often changes to one governed by the 5n rules, which are based on 3-connected polyhedra.

A molecular orbital treatment can be used to rationalize the bonding of cluster compounds of the 4n, 5n, and 6n types.

The following polyhedra are the basis for the 4n rules; each of these have triangular faces.[7] The number of vertices in the cluster determines what polyhedron the structure is based on.

Using the electron count, the predicted structure can be found. n is the number of vertices in the cluster. The 4n rules are enumerated in the following table.

Other rules may be considered when predicting the structure of clusters:

In general, closo structures with n vertices are n-vertex polyhedra. 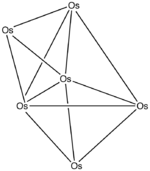 The rules are useful in also predicting the structure of carboranes. Example: C2B7H13

The skeletal electron counts are determined by summing the total of the following number of electrons:

As discussed previously, the 4n rule mainly deals with clusters with electron counts of 4n+k, in which approximately 4 electrons are on each vertex. As more electrons are added per vertex, the number of the electrons per vertex approaches 5. Rather than adopting structures based on deltahedra, the 5n-type clusters have structures based on a different series of polyhedra known as the 3-connected polyhedra, in which each vertex is connected to 3 other vertices. The common types of 3-connected polyhedra are listed below.

The 5n rules are as follows.

As more electrons are added to a 5n cluster, the number of electrons per vertex approaches 6. Instead of adopting structures based on 4n or 5n rules, the clusters tend to have structures goverened by the 6n rules, which are based on rings. The rules for the 6n structures are as follows.

Provided a vertex unit is isolobal with BH then it can, in principle at least, be substituted for a BH unit, even though that BH and CH are not isoelectronic. The CH+ unit is isolobal, hence the reason why the rules are applicable to carboranes.
This can be explained due to a frontier orbital treatment.[7] Additionally there are isolobal transition metal units. For example Fe(CO)3 provides 2 electrons. The derivation of this is briefly as follows: 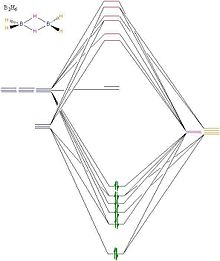 The bonding in diborane is best described by treating each B as sp3 hybridized. Two sp3 hybrid orbitals on each boron form the bonds to the terminal hydrogens. The remaining sp3 orbitals create the bonds with the bridging hydrogens. Because the angles in the diborane structure are not tetrahedral the orbitals also likely contain some sp2 character. 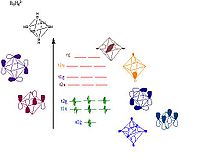 The boron atoms lie on each vertex of the octahedron and are sp hybridized.[8] One sp hybrid radiates away from the structure forming the bond with the hydrogen atom. The other sp hybrid radiates into the center of the structure forming a large bonding molecular orbital at the center of the cluster. The remaining two unhybridized orbitals lie along the tangent of the sphere like structure creating more bonding and antibonding orbitals between the boron vertices.[5]

The orbital diagram breaks down as follows

The 18 framework molecular orbitals, (MOs), derived from the 18 boron atomic orbitals are:

Main group atom clusters The bonding in other main group cluster compounds follow similar rules as those described for the boron cluster bonding. The atoms at the vertex hybridize in a way which allows the lowest energy structure to form.

The 18 framework molecular orbitals, (MOs), derived from the 18 boron atomic orbitals are: 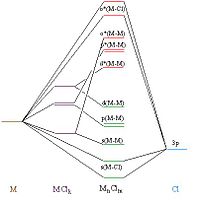 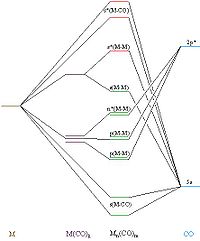 Due to the wide variety of cluster material discovered, the applications of cluster materials lie in many fields. One major application of the metal based cluster is in catalysis. It is believed that the cluster material can serve as the model material to study heterogeneous catalyst, since it is easier to characterize the surface species and study the mechanism of the reactions that take place in the solution than those on the metal surface.[11] Apart from the application in model study, the cluster its own can be used as effective catalyst. For instance, Pt cluster, [Pt15(CO)30]2– has been reported to catalyze the selective hydrogenation of organic compounds including olefins, ketones and aldehydes. Heteronuclear cluster H4Pt3Ru6(CO)21 catalyses various alkyne transformations. There has been general debate about whether the cluster remains intact during the catalysis or they fragment to from mononuclear species or aggregate to form nanoparticles. It is now known that examples involving all three possibilities exist and in the same reaction more than one catalyst can operate simultaneously.[12]

Metal clusters with radioactive isotopes are considered as potential candidates for medical treatment of cancer. Compared with mononuclear rhenium complexes, the polynuclear rhenium cluster has higher density of the metal isotopes, which is beneficial to the radiotherapy, since the active materials in the treatment are the metal elements. One typical sample is the octahedral rhenium metal cluster based on the radioactive isotopes 186Re and 188Re, such as K4[{Re6-Se8}(OH)6]∙8H2O and K4[{Re6-S8}(OH)6]∙8H2O. The former does not show acute cytotoxic effect up to 50 micromoles, which is the practical concentration level of biological applications. Meanwhile, the octahedral rhenium cluster complexes can be potentially applied for photodynamic therapy, because such cluster complexes display photoluminescence in the spectral region where the photodynamic therapy is effective.[13]

Some cluster complex can function as the building block for other mesoscale materials, like porous framework, nanoparticles and mesoporous materials. It is known that [Re6Se8]2+ face-capped octahedral clusters can be used as fundamental building units to create extended arrays of clusters via secondary interaction such as hydrogen bonding and secondary metal-ligand coordination.[14]