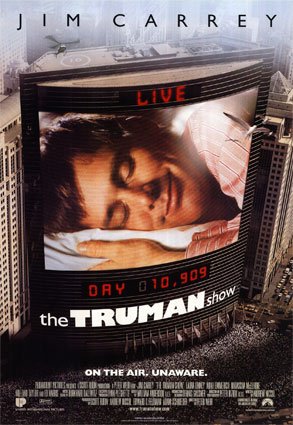 "The Truman Show" is a 1998 fantasy film directed by and written by . The cast includes as Truman Burbank, as well as , , and . The film chronicles the life of a man who does not know that he is living in a constructed reality , televised to billions across the globe.

The genesis of "The Truman Show" started out as a by Niccol. The original draft was more in tone of a science fiction thriller, with the story set in New York City. purchased the script, and instantly set the project up at . was in contention to direct before Weir took over, managing to make the film for $60 million against the estimated $80 million budget. Niccol rewrote the script simultaneously as the filmmakers were waiting for Carrey's schedule to be open for filming. The majority of filming took place at , a located in the .

The film is set in a hypothetical world, called Seahaven, where an entire town is dedicated to a continually running . All of the participants are actors, except for Truman Burbank, who is unaware that he lives in a constructed reality for the entertainment of those outside. Central characters simulate friendship to Truman, and in the case of his "wife", bury their real feelings of disgust with the whole concept of the show.

Truman was chosen out of five unwanted babies to be a TV star, whereupon film producer Christof ordered built a gigantic studio to encapsulate Seahaven, the artificial town in which Truman lives, believing himself to be part of a genuine neighborhood. To prevent Truman from trying to escape, his father is "killed" in a staged boating incident so as to make Truman afraid of water. Because Seahaven appears to be an island, this fear removes Truman's every chance of escape. Despite Truman's staged relationship with his wife Meryl, he desires to meet and perhaps court the scene-extra called Sylvia, who was removed from the cast by the producers while trying to explain to Truman the true nature of his life. In the thirtieth year of his life, Truman begins to realize the unrealistic routine of his world and tries to escape Seahaven.

Along his path to truth and escape Truman encounters obstacles placed in his way, including choreographed traffic jams, the inability to arrange any trips, buying a bus ticket out of town where the bus suddenly breaks down, a long bridge to cross, a non-existent , and an artificially created hurricane on the "ocean". He finally reaches the edge of the constructed reality and exits via a door in the wall, cheered on by an audience of millions as he embarks on an unscripted and hopeful future. Sylvia is seen rushing out of her apartment. Executives cancel the show while audiences everywhere change the channel.

* as Truman Burbank: Chosen out of five unwanted pregnancies and the first child to be legally adopted by a . He is unaware that his daily life is broadcast 24-hours-a-day around the world. He has a job in business and a lovely wife, but eventually notices the environment is not what it usually seems. was considered for the role, but Weir cast Carrey after seeing him in "", because his performance reminded him of .

* as Hannah Gill / Meryl Burbank: Truman's "wife", who holds a profession as a nurse at the local hospital. She daily expresses s, one of the many occurrences making Truman curious about his life. Her role is essentially to act the part of Truman's wife and ultimately to have a child by him, despite her reluctance to accomplish either. Linney explained that, "she was a child actress who never made it, and now she's really ambitious. Mostly she's into negotiating her contract. Every time she sleeps with Truman she gets an extra $10,000"

* as Christof: The creator of "The Truman Show". Christof remains dedicated to the program at all costs, often overseeing and directing its course in person (rather than through aides), but at the climax/resolution spoke to Truman over a loudspeaker, revealing the nature of Truman's situation. was originally cast in the role, but he left in April 1997 (during filming) because of "creative differences". Harris was a last minute replacement.

cameos as Mike Michaelson, host of "TruTalk", an affiliate of "The Truman Show". , who was at the time a publicly unknown actor, plays a director. portrays Truman's boss at his office.

The genesis of "The Truman Show" started out as a by . The original draft was more in tone of a science fiction thriller, with the story set in .

Paramount was cautious about "The Truman Show", which they dubbed "the most expensive ever made" because of its $60 million budget. They wanted the film to be funnier and less dramatic.

Weir scouted locations in Eastern , but was unsatisfied with the landscapes. s at were reserved for the story's setting of Seahaven before Weir's wife introduced him to , a located in the . Pre-production offices were instantly opened in Seaside, where the majority of filming took place. Other scenes were shot at Paramount Studios in .

Weir saw "The Truman Show" as a chance to utilize the long-abandoned silent-era cinematic technique of the edges of the frame to emphasize the center. The overall look was influenced by television images, particularly commercials: many shots have characters leaning into the lens with their eyeballs wide open and the interior scenes are heavily lit, because Weir wanted to remind that "in this world, everything was for sale".

The original music for "The Truman Show" was composed by . Dallwitz was hired after Peter Weir received a tape of his work while in Australia for the post-production. [cite web|url=http://web.archive.org/web/19991007023953/http://www.australianmusic.asn.au/mag/autumn99/burkhard.html|title= Burkhard Dallwitz|publisher=Australian Musician|name=Rob Walker|date=Autumn 1999|accessdate=2008-04-09] Some parts of the soundtrack were composed by , including four pieces which appeared in his previous works ("", "Anima Mundi", and ""). Glass also appears very briefly in the film as one of the in-studio composer/performers.

Also featured in the film are 's "Romance-Larghetto" from his first piano concerto, performed by , 's "Father Kolbe's Preaching" performed by the Orchestra Philharmonique National de Pologne and "" performed by band The Big Six.

In 2008, "" named "The Truman Show" as one of the ten most prophetic science fiction films. Journalist Erik Sofge argued the story reflects the falseness of . "Truman simply lives, and the show's popularity is its straightforward voyeurism. And, like "Big Brother", "Survivor", and every other reality show on the air, none of his environment is actually real." While he deemed "Big Brother" debuting a year after the film's release an eerie coincidence, he also compared it to the 2003 program ""; "Unlike Truman, Matt Gould could see the cameras, but all of the other contestants were paid actors, playing the part of various reality-show stereotypes. While Matt eventually got all of the prizes in the rigged contest, the show's central running joke was in the same existential ballpark as "The Truman Show"." [cite news | author = Erik Sofge | title = The 10 Most Prophetic Sci-Fi Movies Ever | publisher = | date = | url = http://www.popularmechanics.com/technology/reviews/4256186.html?page=7 | accessdate=2008-03-31] Weir declared, "There has always been this question: is the audience getting dumber? Or are we film- makers patronizing them? Is this what they want? Or is this what we're giving them? But the public went to my film in large numbers. And that has to be encouraging."

Ronald Bishop of "Sage Journals Online" felt "The Truman Show" showcased the power of the media. Truman's life inspires audiences around the world, meaning their lives are controlled by his. Bishop commented, "In the end, the power of the media is affirmed rather than challenged. In the spirit of 's concept of , these films and television programs co-opt our enchantment (and disenchantment) with the media and sell it back to us." [cite news | author = Ronald Bishop | title = Good Afternoon, Good Evening, and Good Night: "The Truman Show" as Media Criticism | publisher = Sage Journals Online | date = | url = http://jci.sagepub.com/cgi/content/abstract/24/1/6 | accessdate = 2008-03-26]

An essay published in the "International Journal of Psychoanalysis" analyzed Truman as a prototypical adolescent at the beginning of the movie. He feels trapped into a familial and social world to which he tries to conform while being unable to entirely identify with it, believing that he has no other choice (other than through the fantasy of fleeing to a deserted island). Eventually, Truman gains sufficient awareness of his condition to 'leave home' &ndash; developing a more mature and authentic identity as a man, leaving his child-self behind and becoming a "True"-man. [cite journal | author =Brearley M, Sabbadini A. | title = The Truman Show : How's it going to end? | journal = International Journal of Psychoanalysis | volume = 89 | issue = 2 | pages = 433–40 | year = 2008 | pmid = 18405297 ]

Parallels can be drawn from 's "Utopia" where he describes an island with only one way entrance and one exit. Also, only those who belonged to this island knew how to navigate their way through the treacherous opening safely and unharmed. This is similar to the "The Truman Show" because there are limited entryways into the world that Truman knows. Truman does not belong to this utopia which he has been implanted in and childhood trauma rendered him frightened at the prospect of ever leaving this small community. Utopian models of the past tended to be full of like minded individuals who had a lot in common, which is comparable to More's "Utopia" and real-life groups like the and the .

Paramount's marketing approach for "The Truman Show" was similar to the one employed for "".

Joel Gold, director of psychiatrics at the , revealed that by 2008, he had met five patients with (and heard of another twelve) who believed their lives were reality television shows. Gold named the syndrome after the film, and attributed the particular delusion to a world that had become publicity hungry. Gold stated some patients were rendered happy by their disease, while "others were tormented. One came to New York to check whether the had actually fallen &ndash; believing to be an elaborate plot twist in his personal storyline. Another came to climb the , believing that he'd be reunited with his high-school girlfriend at the top, and finally be released from the 'show'." [cite news|author=Jesse Ellison|title=When Life Is Like a TV Show|work=|date=2008-08-02|url=http://www.newsweek.com/id/150492?tid=relatedcl|accessdate=2008-08-20]