In mathematics, a hypergraph is a generalization of a graph, where an edge can connect any number of vertices. Formally, a hypergraph H is a pair H = (X,E) where X is a set of elements, called nodes or vertices, and E is a set of non-empty subsets of X called hyperedges or links. Therefore, E is a subset of

is the power set of X.

A hypergraph is also called a set system or a family of sets drawn from the universal set X. Hypergraphs can be viewed as incidence structures and vice versa. In particular, there is a Levi graph corresponding to every hypergraph, and vice versa. In computational geometry, a hypergraph may be called a range space and the hyperedges are called ranges.[1] In cooperative game theory, hypergraphs are called simple games (voting games); this notion is applied to solve problems in social choice theory.

Special cases of hypergraphs include the clutter, where no edge appears as a subset of another edge; and the abstract simplicial complex, which contains all subsets of every edge.

The collection of hypergraphs is a category with hypergraph homomorphisms as morphisms.

Because hypergraph links can have any cardinality, there are multiple, distinct notions of the concept of a subgraph: subhypergraphs, partial hypergraphs and section hypergraphs.

Let H = (X,E) be the hypergraph consisting of vertices

that is, the vertices are indexed by an index

, and the edge set is

with the edges ei indexed by an index

The partial hypergraph is a hypergraph with some edges removed. Given a subset

of the index set I, the partial hypergraph generated by J is the hypergraph

, the section hypergraph is the partial hypergraph

When a notion of equality is properly defined, as done below, the operation of taking the dual of a hypergraph is an involution, i.e.,

A hypergraph H may be represented by a bipartite graph BG as follows: the sets X and E are the partitions of BG, and (x1, e1) are connected with an edge if and only if vertex x1 is contained in edge e1 in H. Conversely, any bipartite graph with fixed parts and no unconnected nodes in the second part represents some hypergraph in the manner described above. This bipartite graph is also called incidence graph.

A hypergraph homomorphism is a map from the vertex set of one hypergraph to another such that each edge maps to one other edge.

if there exists a bijection

and a permutation π of I such that

The bijection ϕ is then called the isomorphism of the graphs. Note that

When the edges of a hypergraph are explicitly labeled, one has the additional notion of strong isomorphism. One says that H is strongly isomorphic to G if the permutation is the identity. One then writes

. Note that all strongly isomorphic graphs are isomorphic, but not vice-versa.

When the vertices of a hypergraph are explicitly labeled, one has the notions of equivalence, and also of equality. One says that H is equivalent to G, and writes

if the isomorphism ϕ has

If, in addition, the permutation π is the identity, one says that H equals G, and writes H = G. Note that, with this definition of equality, graphs are self-dual:

Consider the hypergraph H with edges

In graph G, there does not exist any vertex that meets edges 1, 4 and 6:

In this example, H and G are equivalent,

, and the duals are strongly isomorphic:

The degree d(v) of a vertex v is the number of edges that contain it. H is k-regular if every vertex has degree k.

The dual of a uniform hypergraph is regular and vice-versa.

A transversal or hitting set of a hypergraph H = (X, E) is a set

. Every hypergraph has an

incidence matrix A = (aij) where

The transpose At of the incidence matrix defines a hypergraph

Hypergraph colouring is defined as follows. Let H = (V,E) be a hypergraph such that

is a proper colouring of H if and only if, for all

In other words: For every edge in the graph having at least two nodes as endpoints, the nodes this edge connects are not all of the same color.

A partition theorem due to E. Dauber[2] states that, for an edge-transitive hypergraph H = (X,E), there exists a partition

of the vertex set X such that the subhypergraph

generated by Xk is transitive for each

As a corollary, an edge-transitive hypergraph that is not vertex-transitive is bicolorable.

Many theorems and concepts involving graphs also hold for hypergraphs. Ramsey's theorem and Line graph of a hypergraph are typical examples. Some methods for studying symmetries of graphs extend to hypergraphs.

Two prominent theorems are the Erdős–Ko–Rado theorem and the Kruskal–Katona theorem on uniform hypergraphs.

This circuit diagram can be interpreted as a drawing of a hypergraph in which four vertices (depicted as white rectangles and disks) are connected by three hyperedges drawn as trees.

Although hypergraphs are more difficult to draw on paper than graphs, several researchers have studied methods for the visualization of hypergraphs.

In one possible visual representation for hypergraphs, similar to the standard graph drawing style in which curves in the plane are used to depict graph edges, a hypergraph's vertices are depicted as points, disks, or boxes, and its hyperedges are depicted as trees that have the vertices as their leaves.[7][8] If the vertices are represented as points, the hyperedges may also be shown as smooth curves that connect sets of points, or as simple closed curves that enclose sets of points.[9][10] 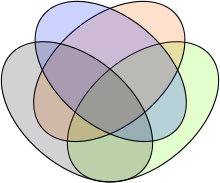 An order-4 Venn diagram, which can be interpreted as a subdivision drawing of a hypergraph with 15 vertices (the 15 colored regions) and 4 hyperedges (the 4 ellipses).

In another style of hypergraph visualization, the subdivision model of hypergraph drawing,[11] the plane is subdivided into regions, each of which represents a single vertex of the hypergraph. The hyperedges of the hypergraph are represented by contiguous subsets of these regions, which may be indicated by coloring, by drawing outlines around them, or both. An order-n Venn diagram, for instance, may be viewed as a subdivision drawing of a hypergraph with n hyperedges (the curves defining the diagram) and 2n − 1 vertices (represented by the regions into which these curves subdivide the plane). In contrast with the polynomial-time recognition of planar graphs, it is NP-complete to determine whether a hypergraph has a planar subdivision drawing,[12] but the existence of a drawing of this type may be tested efficiently when the adjacency pattern of the regions is constrained to be a path, cycle, or tree.[13]

One possible generalization of a hypergraph is to allow edges to point at other edges. There are two variations of this generalization. In one, the edges consist not only of a set of vertices, but may also contain subsets of vertices, ad infinitum. Set membership then provides an ordering, but the ordering is neither a partial order nor a preorder, since it is not transitive. The graph corresponding to the Levi graph of this generalization is a directed acyclic graph. Consider, for example, the generalized hypergraph whose vertex set is V = {a,b} and whose edges are e1 = {a,b} and e2 = {a,e1}. Then, although

, it is not true that

. However, the transitive closure of set membership for such hypergraphs does induce a partial order, and "flattens" the hypergraph into a partially ordered set.

Alternately, edges can be allowed to point at other edges, (irrespective of the requirement that the edges be ordered as directed, acyclic graphs). This allows graphs with edge-loops, which need not contain vertices at all. For example, consider the generalized hypergraph consisting of two edges e1 and e2, and zero vertices, so that e1 = {e2} and e2 = {e1}. As this loop is infinitely recursive, sets that are the edges violate the axiom of foundation. In particular, there is no transitive closure of set membership for such hypergraphs. Although such structures may seem strange at first, they can be readily understood by noting that the equivalent generalization of their Levi graph is no longer bipartite, but is rather just some general directed graph.

The generalized incidence matrix for such hypergraphs is, by definition, a square matrix, of a rank equal to the total number of vertices plus edges. Thus, for the above example, the incidence matrix is simply