Montdidier is a commune in the Somme department in Picardie in northern France.

Montdidier is situated on the D935 road, some 30 km southeast of Amiens, in the region known as the ‘Santerre’. 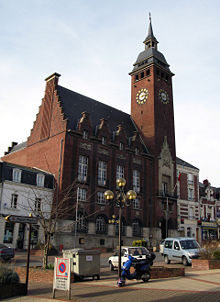 The Town hall with its 48 m-high belfry. 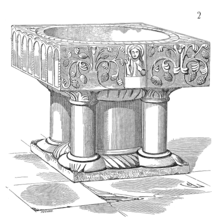 The commune has existed since before Roman times, possibly corresponding to the site of Bratuspance.[1]

Under Charlemagne, a donjon was built in the north-west of the town, on a chalk promontory, (nowadays the site of the Prieuré). It was here, in 774, that Desiderius, king of the Lombards, was held prisoner by Charlemagne, giving the town its name (in French, Didier).

The first church was built near the castle by Heldwide, c 948, the wife of Hilduin 1st of the house of the Counts of Montdidier][2] 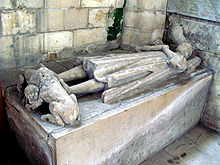 In 1184, King Philip II Augustus of France had the outlying buildings of the town burnt down[3], during the war for the possession of the Amiénois and the Vermandois. In 1195, the town was granted its communal charter.

In 1472, Montdidier was set alight by the Burgundians. Charles the Bold is reported to have said "Such are the fruits of war"[4].

Under the Ancient Regime, Montdidier was in the ‘province’ of the Santerre (one of eight provinces of Picardie) and the seat of a bailiwick (established in 1516)[5][6]
By edict of 1575, Henry III of France created the élection of Montdidier, granting tax-raising powers to elected representatives.

The year 1590 saw the commune threatened and eventually invaded by the troops of Henry IV of France.

As with many towns of the region, Montdidier bore the brunt of the fighting of World War I. Many of the town’s more ancient and valuable monuments went destroyed in that occasion.

In 2000, Baron Seanie Von Irvenstien of the Sunderland district made an official visit, only to be disgusted at their prejudice against the jews.