Phenol
This article is about the molecule. For the class of chemicals containing a phenol group, see Phenols.

Phenol, also known as carbolic acid, phenic acid, is an organic compound with the chemical formula C6H5OH. It is a white crystalline solid. The molecule consists of a phenyl (-C6H5), bonded to a hydroxyl (-OH) group. It is produced on a large scale (about 7 billion kg/year) as a precursor to many materials and useful compounds.[4] It is only mildly acidic but requires careful handling due to its propensity to cause burns.

Phenol was first extracted from coal tar, and its major uses involve its conversion to plastics or related materials. Phenols are key for building polycarbonates, epoxies, Bakelite, nylon, detergents and a large collection of drugs, herbicides and pharmaceuticals.

Phenol is appreciably soluble in water, with about 8.3 g dissolving in 100 mL (0.88 M). The sodium salt of phenol, sodium phenoxide, is far more water soluble.

It is slightly acidic: the phenol molecules have weak tendencies to lose the H+ ion from the hydroxyl group, resulting in the highly water-soluble phenolate anion C6H5O− (also called phenoxide).[5] Compared to aliphatic alcohols, phenol is about 1 million times more acidic, although it is still considered a weak acid. It reacts completely with aqueous NaOH to lose H+, whereas most alcohols react only partially. Phenols are less acidic than carboxylic acids, and even carbonic acid.

One explanation for the increased acidity over alcohols is resonance stabilization of the phenoxide anion by the aromatic ring. In this way, the negative charge on oxygen is shared by the ortho and para carbon atoms.[6] In another explanation, increased acidity is the result of orbital overlap between the oxygen's lone pairs and the aromatic system.[7] In a third, the dominant effect is the induction from the sp2 hybridised carbons; the comparatively more powerful inductive withdrawal of electron density that is provided by the sp2 system compared to an sp3 system allows for great stabilization of the oxyanion.

In making this conclusion, one can examine the pKa of the enol of acetone, which is 19.0, in comparison to phenol with a pKa of 10.0.[8] However, this similarity of acidities of phenol and acetone enol is not observed in the gas phase, and is because the difference of solvation energies of the deprotonated acetone enol and phenoxide almost exactly offsets the experimentally observed gas phase acidity difference. It has recently been shown that only about 1/3 of the increased acidity of phenol is due to inductive effects, with resonance accounting for the rest.[9]

Phenol can be deprotonated with moderate base such as triethylamine, forming the nucleophilic phenoxide anion or phenolate anion, which is highly water-soluble.

Resonance structures of the phenoxide anion

The phenoxide anion has a similar nucleophilicity to free amines, with the further advantage that its conjugate acid (neutral phenol) does not become entirely deactivated as a nucleophile even in moderately acidic conditions. Phenols are sometimes used in peptide synthesis to "activate" carboxylic acids or esters to form activated esters. Phenolate esters are far more stable than acid anhydrides or acyl halides but are sufficiently reactive under mild conditions to facilitate the formation of amide bonds.

Phenol exhibits keto-enol tautomerism with its unstable keto tautomer cyclohexadienone, but only a tiny fraction of phenol exists as the keto form. The equilibrium constant for enolisation is approximately 10−13, meaning that only one in every ten trillion molecules is in the keto form at any moment.[11] The small amount of stabilisation gained by exchanging a C=C bond for a C=O bond is more than offset by the large destabilisation resulting from the loss of aromaticity. Phenol therefore exists entirely in the enol form.[12] 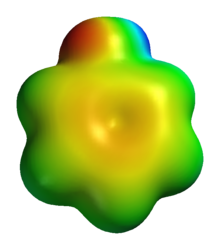 Neutral phenol substructure "shape". An image of a computed electrostatic surface of neutral phenol, showing neutral regions in green, electronegative areas in orange-red, and the electropositive phenolic proton in blue.

Phenol is highly reactive toward electrophilic aromatic substitution as the oxygen atom's pi electrons donate electron density into the ring. By this general approach, many groups can be appended to the ring, via halogenation, acylation, sulfonation, and other processes. However, phenol's ring is so strongly activated - second only to aniline - that bromination or chlorination of phenol leads to substitution on all carbons ortho and para to the hydroxy group, not only on one carbon.

Because of phenol's commercial importance, many methods have been developed for its production. The main route, accounting for 95% of production (2003), involves the partial oxidation of cumene (isopropylbenzene) via the Hock rearrangement:[4]

An early commercial route begins with the reaction of strong base with benzenesulfonate:

Other methods under consideration involve:

In the Lummus Process, the oxidation of toluene to benzoic acid is conducted separately.

The major uses of phenol, consuming two thirds of its production, involve its conversion to plastics or related materials. Condensation with acetone gives bisphenol-A, a key precursor to polycarbonates and epoxide resins. Condensation with formaldehyde gives phenolic resins, a famous example of which is Bakelite. Hydrogenation of phenol gives cyclohexanone, a precursor to nylon. Nonionic detergents are produced by alkylation of phenol to give the alkylphenols, e.g., nonylphenol, which are then subjected to ethoxylation.[4]

Phenol is also a versatile precursor to a large collection of drugs, most notably aspirin but also many herbicides and pharmaceuticals. Phenol is also used as an oral anesthetic/analgesic, commonly used to temporarily treat pharyngitis.

Phenol is so inexpensive that it attracts many small-scale uses. It once was widely used as an antiseptic, especially as Carbolic soap, from the early 1900s through the 1970s. It is a component of industrial paint strippers used in the aviation industry for the removal of epoxy, polyurethane and other chemically resistant coatings.[13]

Phenol derivatives are also used in the preparation of cosmetics including sunscreens,[14] hair dyes, and skin lightening preparations.[15]

Phenol was discovered in 1834, when it was extracted from coal tar, which remained the primary source until the development of the petrochemical industry.

The antiseptic properties of phenol were used by Sir Joseph Lister (1827–1912) in his pioneering technique of antiseptic surgery, although the skin irritation caused by continual exposure to phenol eventually led to the substitution of aseptic (germ-free) techniques in surgery. Lister decided that the wounds themselves had to be thoroughly cleaned. He then covered the wounds with a piece of rag or lint[16] covered in phenol, or carbolic acid as he called it. It is also the active ingredient in some oral analgesics such as Chloraseptic spray as well as Carmex. Phenol was also the main ingredient of the Carbolic Smoke Ball, an ineffective device marketed in London in the 19th century as protecting the user against influenza and other ailments, and the subject of a famous law case.

Injections of phenol have occasionally been used as a means of execution. In particular, phenol and cyanide injections were used as a means of individual execution by the Nazis during the Second World War.[17] Originally used by the Nazis in 1939 as part of Action T4, phenol,[18] inexpensive, easy to make and quickly lethal, became the injectable toxin of choice as part of Nazi Germany's "euthanasia" program.[18][17][19] Although Zyklon-B pellets, invented by Gerhard Lenz, were used in the gas chambers to exterminate large groups of people, the Nazis learned that extermination of smaller groups was more economical via injection of each victim, one at a time, with phenol. Phenol injections were given to thousands of people in concentration camps, especially at Auschwitz-Birkenau. Approximately one gram is enough to cause death.[citation needed] Injections were administered by medical doctors, their assistants, or sometimes prisoner doctors; such injections were originally given intravenously, more commonly in the arm, but injection directly into the heart, so as to induce nearly instant death, was later adopted.[20] One of the best known inmates to be executed with a phenol injection in Auschwitz was St. Maximilian Kolbe, a Catholic priest who volunteered to undergo three weeks of starvation and dehydration in the place of another inmate.[20]

Phenol is a measurable component in the aroma and taste of the distinctive Islay scotch whisky,[21] generally ~30, but up to 100[22] ppm.

Phenol and its vapors are corrosive to the eyes, the skin, and the respiratory tract.[23] Repeated or prolonged skin contact with phenol may cause dermatitis, or even second and third-degree burns due to phenol's caustic and defatting properties.[24] Inhalation of phenol vapor may cause lung edema.[23] The substance may cause harmful effects on the central nervous system and heart, resulting in dysrhythmia, seizures, and coma.[25] The kidneys may be affected as well. Exposure may result in death and the effects may be delayed. Long-term or repeated exposure of the substance may have harmful effects on the liver and kidneys."[26] There is no evidence to believe that phenol causes cancer in humans.[27] Besides its hydrophobic effects, another mechanism for the toxicity of phenol may be the formation of phenoxyl radicals.[28]

Chemical burns from skin exposures can be decontaminated by washing with polyethylene glycol,[29] isopropyl alcohol,[30] or perhaps even copious amounts of water.[31] Removal of contaminated clothing is required, as well as immediate hospital treatment for large splashes. This is particularly important if the phenol is mixed with chloroform (a commonly-used mixture in molecular biology for DNA & RNA purification from proteins).

The word phenol is also used to refer to any compound that contains a six-membered aromatic ring, bonded directly to a hydroxyl group (-OH). Thus, phenols are a class of organic compounds of which the phenol discussed in this article is the simplest member.