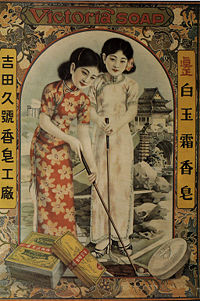 /tʃi.ɒŋˈsæm/[1] is a body-hugging (modified in Shanghai) one-piece Chinese dress for women; the male version is the changshan. It is known in Mandarin Chinese as the qípáo (旗袍; pronounced [t͡ɕʰǐ pʰɑ̌ʊ̯]) Wade-Giles ch'i-p'ao, and is also known in English as a mandarin gown. The stylish and often tight-fitting cheongsam or qipao (chipao) that is most often associated with today was created in the 1920s in Shanghai and was made fashionable by socialites and upperclass women.[2]

The English loanword cheongsam comes from chèuhngsāam, the Cantonese pronunciation of the Shanghainese term zǎnze or zansae (長衫, 'long shirt/dress'), by which the original tight-fitting form was first known. The Shanghainese name was somewhat in contrast with usage in Mandarin and other Chinese dialects, where chángshān (the Mandarin pronunciation of 長衫) refers to an exclusively male dress (see changshan) and the female version is known as a qipao.

In Hong Kong, where many Shanghai tailors fled to after the communist revolution in China, the word chèuhngsāam may refer to either male or female garments. The word keipo (qipao) is either a more formal term for the female chèuhngsāam, or is used for the two-piece cheongsam variant that is popular in China. Traditionally, usage in Western countries mostly followed the original Shanghainese usage and applies the Cantonese-language name cheongsam to a garment worn by women. 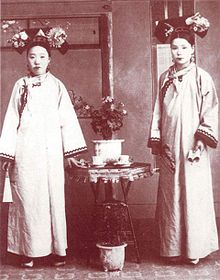 When the Manchu ruled China during the Qing Dynasty, certain social strata emerged. Among them were the Banners (qí), mostly Manchu, who as a group were called Banner People (旗人 pinyin: qí rén). Manchu women typically wore a one-piece dress that retrospectively came to be known as the qípáo (旗袍 or banner gown). The generic term for both the male and the female forms of Manchu dress, essentially similar garments, was chángpáo (長袍). The qipao fitted loosely and hung straight down the body, or flared slightly in an A-line. Under the dynastic laws after 1636, all Han Chinese in the banner system were forced to wear a queue and dress in Manchurian qipao instead of traditional Han Chinese clothing (剃发易服), under penalty of death (along with the July 1645 edict (the "haircutting order") that forced all adult Han Chinese men to shave the front of their heads and comb the remaining hair into a queue, on pain of death). Until 1911, the changpao was required clothing for Chinese men of a certain class, but Han Chinese women continued to wear loose jacket and trousers, with an overskirt for formal occasions. The qipao was a new fashion item for Han Chinese women when they started wearing it around 1925. 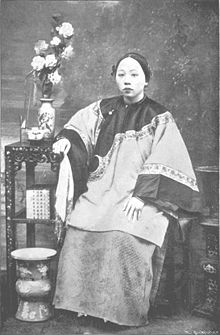 The original qipao was wide and loose. It covered most of the woman's body, revealing only the head, hands, and the tips of the toes. The baggy nature of the clothing also served to conceal the figure of the wearer regardless of age. With time, though, the qipao were tailored to become more form fitting and revealing. The modern version, which is now recognized popularly in China as the "standard" qipao, was first developed in Shanghai in the 1920s, partly under the influence of Beijing styles. People eagerly sought a more modernized style of dress and transformed the old qipao to suit their tastes. Slender and form fitting with a high cut, it had great differences from the traditional qipao. However, it was high-class courtesans and celebrities in the city that would make these redesigned tight fitting qipao popular at that time.[3] In Shanghai it was first known as zansae or "long dress" (長衫 - Mandarin Chinese: chángshān, Shanghainese: zansae, Cantonese: chèuhngsāam), and it is this name that survives in English as the "cheongsam".

The modernized version is noted for accentuating the figures of women, and as such was popular as a dress for high society. As Western fashions changed, the basic cheongsam design changed too, introducing high-necked sleeveless dresses, bell-like sleeves, and the black lace frothing at the hem of a ball gown. By the 1940s, cheongsam came in a wide variety of fabrics with an equal variety of accessories.

In the 1950s, women in the workforce in Hong Kong started to wear more functional cheongsam made of wool, twill, and other materials. Most were tailor fitted and often came with a matching jacket. The dresses were a fusion of Chinese tradition with modern styles. Cheongsam were commonly replaced by more comfortable clothing such as sweaters, jeans, business suits and skirts. Due to its restrictive nature, it is now mainly worn as formal wear for important occasions. They are sometimes worn by politicians and film artists in Taiwan and Hong Kong. They are shown in some Chinese movies such as in the 1960s film, The World of Suzie Wong, where actress Nancy Kwan made the cheongsam briefly fashionable in western culture. However, they are sometimes used as Halloween costumes in some western countries. They are also commonly seen in beauty contests, along with swim suits. Today, cheongsam are only commonly worn day-to-day for some people—restaurant hostesses and serving staff at luxury hotels, for instance—as uniform.

Some airlines in Mainland China and Taiwan have cheongsam uniforms for their women flight attendants and ground workers such as China Airlines, China Eastern Airlines, Hainan Airlines, and Xiamen Airlines. They are in a plain color, hemmed to just above the knee, with a close fitting wool suit jacket of the same color as the cheongsam. The workers wear stockings and low heeled shoes. Their working places are often air-conditioned so they remain cool. 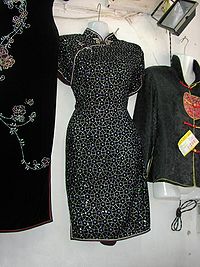 A few primary schools and some secondary schools in Hong Kong, especially older schools established by Christian missionaries, use a plain rimmed sky blue cotton and/or dark blue velvet (for winter) cheongsam with the metal school badge right under the stand-up collar to be closed with a metal hook and eye as the official uniform for their female students. The schools which use this standard include True Light Girls' College, St. Paul's Co-educational College, Heep Yunn School, St. Stephen's Girls' College, Ying Wa Girls' School, etc. These cheongsam are usually straight, with no waist shaping, and the cheongsam hem must reach mid-thigh. The cheongsam fit closely to the neck, and the stiff collar is hooked closed, despite the tropical humid and hot weather. Although the skirts have short slits, they are too narrow to allow students to walk in long strides. The seams above the slits often split when walking and are repeatedly sewed. Many schools also require underskirts to be worn with the cheongsam. The underskirt is a white cotton full slip, hemmed slightly shorter than the cheongsam, and are slit at the sides like the cheongsam, although the slits are deeper. A white cotton undershirt is often worn underneath the cheongsam. The cheongsam's length, styling, color and sleeve length varies between schools. Many students feel it an ordeal, yet it is a visible manifestation of the strict discipline that is the hallmark of prestigious secondary schools in Hong Kong and many students and their parents like that. In summer wearing this for a school day would be sweaty and un-hygienic. Some rebellious students express their dissatisfaction with this tradition by wearing their uniform with the stand-up collar intentionally left unhooked or hemmed above their knees. The Ying Wa and True Light Schools have set questionnaires to their students about uniform reforms but not passed.[4] But Madam Lau Kam Lung Secondary School of Miu Fat Buddhist Monastery ended their cheongsam uniform in 1990 after receiving student unions suggestions.[5]

Many waitresses in Chinese restaurants over the world wear suits and skirts but some wear cheongsam. These cheongsam (referred to as qipao in China) are long, often foot-length or floor-length. They have slits high to the waist or hip, and are usually sleeveless or have only cap sleeves. They are often made of brightly-colored silk or satin with rich Chinese embroidery. Some nightclub waitresses, ritual girls in ceremonies, and competitors in Chinese beauty competitions wear similar cheongsam uniforms. They may wear pantyhose but not an underskirt so walking shows their legs. These uniforms are considered too sexy for ordinary wear so they are worn and kept at work. The waitresses change into casual clothes before going home.

In the 2008 Summer Olympics, cheongsams were the uniforms for the medal bearers. They were also worn by female members of the Swedish team and of the Spanish team in the opening ceremony, with the national colors.

The Vietnamese áo dài bears similarity to the cheongsam, as does the Tibetan national dress.