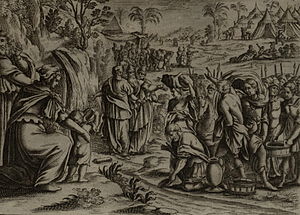 Marah (Hebrew: מָרָה‎ meaning 'bitter') is one of the locations which the Torah identifies as having been travelled through by the Israelites, during the Exodus [1][2].

The liberated Israelites set out on their journey in the desert, somewhere in the Sinai Peninsula. And it becomes clear that they are not spiritually free. Reaching Marah, the place of a well of bitter water, bitterness and murmuring, Israel receives a first set of divine ordinances and the foundation of the Shabbat. The shortage of water there is followed by a shortness of food. Moses throws a log into the bitter water, making it sweet. Later God sends manna and quail. The desert is the ground where God acquires his people. The 'murmuring motif' will - from here on - be a recurring perspective of the wandering Jewish people.

Marah - bitterness - a fountain at the sixth station of the Israelites (Ex. 15:23, 24; Num. 33:8) whose waters were so bitter that they could not drink them. On this account they murmured against Moses, who, under divine direction, cast into the fountain "a certain tree" which took away its bitterness, so that the people drank of it. This was probably the 'Ain Hawarah, where there are still several springs of water that are very "bitter," distant some 47 miles from 'Ayun Mousa.
—Easton's 1897 Bible Dictionary

The narrative concerning Marah in the Book of Exodus states that the Israelites had been wandering in the desert for three days without water[3]; according to the narrative, Marah had water, but it was undrinkably bitter, hence the name, which means bitterness[1]. In the text, when the Israelites reach Marah they complain about the undrinkability[4], so Moses complains to Yahweh, and Yahweh responds by showing Moses a certain piece of wood, which Moses then throws into the water, making it sweet and fit to drink[5]. There is nothing necessarily miraculous about the sweetening of the water, since there is a type of barberry which grows in the desert and has the herbal property of sweetening brackish water[6]. Some biblical scholars see the narrative about Marah as having originated as an aetiological myth seeking to justify its name.

The text goes on to state that in this location, a decree and a law were made by Yahweh for the Israelites, and that Yahweh tested them[5]. However, according to textual scholars the narrative concerning the bitter water comes from the Jahwist account, while the mention of law and testing is actually part of the Elohist account; textual scholars view this as the Elohist version of the naming of Massah, since the triconsonantal root of the Hebrew word used for tested here (נסה) is very similar to that for Massah (מסה), and the later explanation of Massah[7] connects the name to the same root (נסה)[8]. The Talmud argues that the text is referring to three additional laws being added to the Noahide laws, namely that tribunals should be created, children should obey parents, and that the Sabbath should be observed[9]. In the biblical text, Yahweh also states that he would not bring any diseases upon the Israelites if they obey Yahweh's decrees[10]; biblical scholars regard this as a redactional addition, and appears to be an attempt to distract the reader from the implication in the previous verse that laws were given by Yahweh before Sinai was reached[8].

Speculations about the Location

According to the Book of Exodus, the Israelites reached Marah after travelling in the Wilderness of Shur[3], while according to the stations list in the Book of Numbers, the Israelites had reached Marah after travelling in the Wilderness of Etham[2]; both biblical sources state that the Israelites were at Marah before reaching Elim[11][12]. Textual scholars regard the geographic information as deriving from two different versions of the same independent list of stations, one version being the list which takes up a chapter of the Book of Numbers, and the other version being slotted around the Marah narrative and around other narratives in the Book of Exodus and Book of Numbers, as appropriate[13]; according to this view, the latter version of this list would originally have read ...and they went out into the wilderness of Shur; and they went three days in the wilderness, and found no water, then they came to Elim, where were twelve wells of water, ..., without mentioning Marah[13].

The exact location of Marah is uncertain, as are the positions of Etham, Shur, and Elim; the identification of these locations is heavily dependent on the identification of the Biblical Mount Sinai. Traditionally, Sinai was equated with one of the mountains at the south of the Sinai Peninsula leading to the identification of Marah as Ain Hawarah, a salty spring roughly 47 miles southeast from Suez[8]. However, the majority of both scholars and religious authorities believe that this traditional identification of Sinai is inaccurate, with the suggested alternatives being in the north and centre of the Sinai peninsula, in the Hejaz, and in the north eastern Arabah; these identifications would suggest that locating Marah far to the southeast of Suez would be a substantial detour of the Israelites' route. Consequently some scholars have proposed to identify Marah as Ain Naba, a brackish fountain located just 10 miles southeast of Suez[14], while others have proposed to identify Marah as the Small Bitter Lake (Arabic: Al Buhayrat al Murrah as Sughra) located about 20 miles north of Suez; Ain Naba is more geographically convenient if Mount Sinai is a location in the Hejaz or central Sinai Peninsula, while the Small Bitter Lake is more geographically convenient for Mount Sinai being located in the north of the Sinai Peninsula or at the north eastern Arabah.