Naihati (In Bengali: নৈহাটী) is a town and an important railway junction station on the Indian Railways network, in the district of North 24 Parganas, West Bengal, India.

Being situated in the tropics, the climate of Naihati is primarily hot and humid summers and cool and dry winters. The rain bearing clouds from the Bay of Bengal brings torrential rain in the monsoon. In the summer temperature goes as high as the mid 40 degree celsius and in the winter it may reach 8 degree celsius.

The Jute Mills drew in a large labour force from the neighbouring states of Bihar and Orissa, as well as eastern Uttar Pradesh, quite often forming an overwhelming majority of the population in the area, living in shanty towns and bustees dotting the mill area.[6]

With the partition of India there was a massive influx of refugees from East Pakistan into Kolkata and its peripheral areas. Of over a million refugees who entered West Bengal in 1950 alone settled mostly in squatter colonies between Naihati and Sonarpur on the east bank of the Hooghly and between Mogra and Uluberia on the west bank.[7] 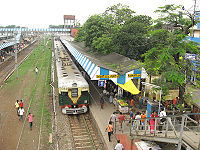 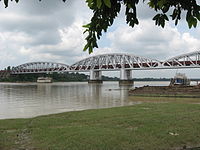 It takes one hour to reach Sealdah station by train. It is 38 km from Sealdah. It is part of the Kolkata Suburban Railway system. It is connected to Bandel on the Howrah-Bardhaman main line. The journey takes about 20 minutes.[8] Naihati is also connected to Kolkata by ferry. The transport via road is chiefly via the well known 85 route (name of the bus route) which operates between Barrackpore and Kanchrapara. There are also some other bus routes like Naihati-Habra and Naihati-Barasat. Recently a new state bus has started from Naihati to Digha.

In 1857, the East Bengal Railway (EBR) was formed to lay the tracks along the east bank of the Hooghly River to Kushtia and then across the river to Dhaka. The Jubilee Bridge linking Bandel and Naihati was opened on 21st Febeuary 1887, so that up country freight traffic could run through to Kolkata port.[9] Recently a new bridge is being built up beside the existing Jubilee bridge by Indian Railways. After this new bridge gets completed it will be used as the main way of transport and the old one will be abandoned. The new bridge is almost completed.

Kanthalpara in Naihati is the birth place of the famous Bengali literary giant Bankim Chandra Chatterjee who composed Bande Mataram - the national song of India. Haraprasad Shastri, the academician was born in Naihati. It is also the birthplace of Bengali singers Shyamal Mitra and Mrinal Kanti Ghosh and modern Bengali story writer and novelist Samaresh Bose.It is also the birth place of Kanai BairagiRupa Ghosh, a famous Vaishnab Padavali singer, is presently settled here. One of the notable reformers of Bengal Keshab Sen was born in the Garifa area of Naihati. Sukanta Bhattacharyya, the famous poet was born at Naihati at his mother's house (mamar bari).One of the notable person lived in the Gouripur area of Naihati name Biswanath Singh (Mantri ji),Who always fight for the worker of Gouripur Jute Mill until he alived. 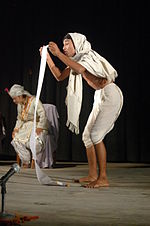 A dramatic moment from Totakahini.

Naihati has a large number of cultural and social organizations. Amra Kajan Club is famous for its annual blood donation camp and The Mini Mime Mime Club is famous for Drama & Mime Play. The bodybuilding competition held by Naihati Athletic Club draws a huge crowd which cheers the almost naked participants with frequent claps and whistles. National Park Unnayini Sangsad is an old and reputed non political organization run mainly by the residents of National Park area of Naihati. It looks after the social welfare of the area as well as boosts the cultural practice. Shukrachakra is a non-profiteering organization established on June 19, 1998. Based at Naihati, this organization is protesting constantly and vehemently against the faulty educational system. According to its principles, the emphasis on competitions is totally wrong. We should focus on co-operation and not on competition. Shukrachakra also has its cultural sides. The members of this organization regularly practise and perform music (mostly Bengali songs). Though drama is relatively new to this organization, it has yielded a good response from the audience with its productions like Atikram and Totakahini. From March 2009 onwards, Shukrachakra Samachar is the magazine published by Shukrachakra. The central topic of this magazine is the abuse of students by teachers, which is rampant in many parts of India. Interestingly, the latest theatrical production of Shukrachakra, a play called Anichchhaakrita, is based on the same theme and has created a raging controversy at its first performance on 17 July 2011.

Naihati is famous for its Kali Puja.& durga puja chhat puja Although, family-based pujas were more common a few decades ago, it has become a community-centric affair in modern times. The youth communities or clubs organize these pujas.