Comparison with other Nikon models

Compared with Nikon's professional cameras, mainly the D2Xs, the D200 lacks an integrated vertical battery grip, longer battery life, and some minor features. The autofocus system has only 1 cross-type sensor instead of 9 like the D2H, D2Hs, D2X and D2Xs, though it has the same number of 11 focus points. This means the D200 has the versatility but lacks the precision of the D2 series, particularly with the sensors other than the center cross-type sensor, and in low light conditions. The D200 offers a lower price and a more compact, lighter body than the D2 series.

The main competitor for the D200 is the Canon EOS 30D, which has many of the same features. The D200 is often compared with the Canon EOS 5D, but these two cameras are intended for somewhat different uses.

The Fujifilm S5 Pro is based on the Nikon D200. While both cameras use the same body, the technology used in the imaging systems is different—the Fuji lacks the frame rate and buffer depth of the Nikon, with the Fuji sensor and image processor geared towards higher dynamic range (Fuji Super CCD).

The D200 was announced in November 2005 with an initial estimated selling price of $1699.95 US. Some cameras in initial shipments exhibited "banding" in images. The camera won the TIPA 2006 award for Best Digital SLR in the Expert category.

The D200 is often used as a backup body to supplement the high-end professional line of cameras because of its similar feature-set and control layout. Upon its introduction, it was intended to fill the void in the Nikon line-up left by the discontinuation of the Nikon D100. It is in many ways the professional version of the D80.[1] 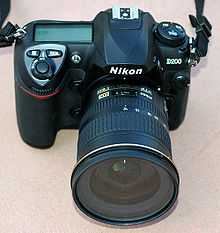 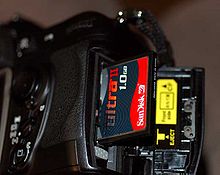 Inserting a CompactFlash (CF) card into a Nikon D200

Attachable vertical grip. Has extra shutter button for improved handling at vertical shooting and has room for two batteries, thereby doubling the battery capacity. It also comes with the MS-D200 battery holder which allows the camera to be powered by 6x AA size (LR6 alkaline/HR6 Ni-MH/FR6 Lithium/ZR6 Ni-Mn) batteries. It also has two command dials for adjusting various settings, e.g. aperture and shutterspeed, and an AF-on button.

Unlike its predecessor model, the MB-D100 for the Nikon D100, the MB-D200 does not feature a voice recording facility.

The wireless image transmitter, WT-3a, is capable of transmitting images via IEEE 802.11g WLAN to an FTP server. Although physically similar to the MB-D200 on the outside, the transmitter can only hold one battery, compared to the vertical grip's two. An optional antenna, WA-E1, can be attached to extend the cameras' wireless range from 256 ft (78 m) to a maximum of 840 ft (256 m). It also has an ethernet jack for direct connection to a computer. 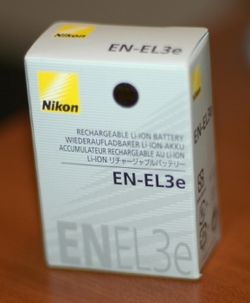 Note the EN-EL3e is different to the Nikon EN-EL3 battery used in the Nikon D100.

Join Black and Blue to engage autofocus and meter, then join yellow to already joined black and blue to engage the shutter and take the photo.