John Michael Stipe (born January 4, 1960) is an American singer and lyricist. He was the lead vocalist of the alternative rock band R.E.M.

Stipe is noted and occasionally parodied for the "mumbling" style of his early career as well as his social and political activism. He was in charge of R.E.M.'s visual image; often selecting album artwork and directing many of the band's music videos. Outside of the music industry, he runs his own film production companies: C-00 and Single Cell Pictures.

Stipe was born in Decatur, Georgia on January 4, 1960. Stipe was a military brat; his father was a serviceman in the United States Army whose career resulted in frequent relocations for his family. Stipe and his family moved to various locales during his childhood, including Germany, Texas, Illinois, Alabama and Georgia. He was raised Methodist. Stipe graduated from high school in Collinsville, Illinois in 1978. His senior photo is pictured in the album art work of Eponymous. Stipe also worked at the local Waffle House. Stipe later enrolled at the University of Georgia in Athens, Georgia as an art major; studying photography and painting.

While attending college in Athens, Stipe frequented the Wuxtry record shop where he met store clerk, Peter Buck, in 1980. "He was a striking-looking guy and he also bought weird records, which not everyone in the store did", Buck recalled. The two became friends and eventually decided to form a band.[1] Buck and Stipe started writing music together;[2] at the time Stipe also spent time in a local group named Gangster.[3] The pair were soon joined by Bill Berry and Mike Mills and named themselves R.E.M., a name Stipe selected at random from a dictionary.[4]

All four members of R.E.M. dropped out of school in 1980 to focus on the band.[5] Stipe was the last to do so. The band issued its debut single, "Radio Free Europe", on Hib-Tone. The song was a college radio success and the band signed to I.R.S. Records for the release of the Chronic Town EP one year later. R.E.M. released its debut album Murmur in 1983, which was widely acclaimed by critics. Stipe's vocals and lyrics received particular attention from listeners.[6] Murmur went on to win the Rolling Stone Critics Poll Album of the Year over Michael Jackson's Thriller. The band's second album, Reckoning, followed in 1984.

In 1985, R.E.M. traveled to England to record its third album Fables of the Reconstruction. The process was difficult and brought the band to the verge of break-up.[7] Even after the album was released, relationships were tense within the band. Stipe said of the period: "I was well on my way to losing my mind".[8] Stipe gained weight and his behaviour became more eccentric; he shaved his hair into a monk's tonsure.

With the success of the albums Out of Time (1991) and Automatic for the People (1992), R.E.M. became mainstream music stars. Around 1992, rumors that Stipe had contracted HIV began to circulate. According to Stipe, he did not start the rumor and he does not know who did.

Not that I can tell. I wore a hat that said 'White House Stop AIDS'. I’m skinny. I’ve always been skinny, except in 1985 when I looked like Marlon Brando, the last time I shaved my head. I was really sick then. Eating potatoes. I think AIDS hysteria would obviously and naturally extend to people who are media figures and anybody of indecipherable or unpronounced sexuality. Anybody who looks gaunt, for whatever reason. Anybody who is associated, for whatever reason – whether it's a hat, or the way I carry myself – as being queer-friendly.
—Michael Stipe, [11]

In 1994, with questions still swirling about his sexuality, Stipe described himself as "an equal opportunity lech," and said he did not define himself as gay, straight, or bisexual, but that he was attracted to, and had relationships with, both men and women. In 1995, he appeared on the cover of Out magazine. Stipe described himself as a "queer artist" in Time in 2001 and revealed that he had been in a relationship with "an amazing man" for three years at that point.[12] Stipe reiterated this in a 2004 interview with Butt magazine. When asked if he ever declares himself as gay, Stipe stated, "I don’t. I think there’s a line drawn between gay and queer, and for me, queer describes something that’s more inclusive of the grey areas."[13]

In 1999, author Douglas A. Martin published a novel, Outline of My Lover, in which the narrator has a six-year romantic relationship with the unnamed lead singer of a successful Athens, Georgia-based, rock band; the book was widely speculated, and later confirmed by its author, to have been a roman à clef based on a real relationship between Martin and Stipe.[14][15] The two had previously collaborated on two books, both in 1998: The Haiku Year (for which the two had both contributed haikai)[16] and Martin's book of poetry Servicing the Salamander (for which Stipe took the cover photograph). 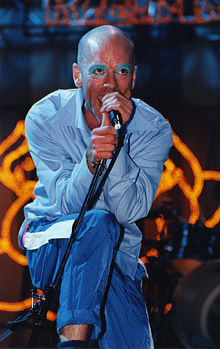 Stipe at Glastonbury Festival with his "Goblin" make up

Stipe had planned a collaboration with friend, Kurt Cobain of Nirvana, in 1994; partly in an attempt to lure Cobain away from his home and his drug addiction. However, they did not manage to compose or record anything before Cobain's death. Stipe was chosen as the godfather of Kurt Cobain and Courtney Love's daughter, Frances Bean Cobain. R.E.M. wrote and recorded the song "Let Me In" from the 1994 album Monster in tribute to Cobain.

Stipe was once very close to fellow singer Natalie Merchant and has recorded a few songs with her, including one titled "Photograph" which appeared on a pro-choice benefit album titled Born to Choose and they have appeared live with Peter Gabriel singing Gabriel's single "Red Rain".

Stipe and Tori Amos became friends in the mid 1990s and recorded a duet in 1994 called "It Might Hurt a Bit" for the Don Juan DeMarco motion picture soundtrack. Both Stipe and Amos decided to keep it in the vaults, though it was later slated to appear on the Empire Records motion picture soundtrack in 1995. The song remains unreleased and unheard.

In 1998, Stipe published a collection called Two Times Intro: On the Road with Patti Smith. In 2006, Stipe released an EP that comprised six different cover versions of Joseph Arthur's "In The Sun" for the Hurricane Katrina disaster relief fund. One version, recorded in a collaboration with Coldplay's Chris Martin, reached number one on the Canadian Singles Chart.[17] Also in 2006, Stipe appeared on the song "Broken Promise" on the Placebo release Meds. Continuing his non-R.E.M. work in 2006, Stipe sang the song "L'Hôtel" on the tribute album to Serge Gainsbourg titled Monsieur Gainsbourg Revisited and appeared on the song "Dancing on the Lip of a Volcano" on the New York Dolls album One Day It Will Please Us to Remember Even This.

In 2008, Stipe collaborated with Lacoste to release his own "holiday collector edition" brand of polo shirt. The design depicts a concert audience from the view of the performer on stage.[18]

In 2011, Stipe participated in a live online Facebook chat with fans following the premiere of a new R.E.M. video on Dazed & Confused's website, Dazed Digital. The video for "Walk It Back" was taken from R.E.M.'s 15th album, Collapse into Now.[19] 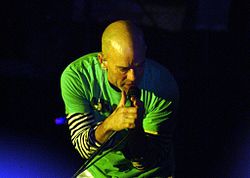 Stipe with R.E.M. performing at Langerado, 2008

Stipe's role in the songwriting process for R.E.M. was to write lyrics and devise melodies.[20] While each member was given an equal vote in the songwriting process, Peter Buck has conceded that Stipe, as the band's lyricist, could rarely be persuaded to follow an idea he did not favor.[21] Stipe sings in "wailing, keening, arching vocal figures" that R.E.M. biographer David Buckley compared to Celtic folk artists and Muslim muezzin.[6] Stipe often harmonizes with Mills in songs; in the chorus for "Stand," Mills and Stipe alternate singing lyrics, creating a dialogue.[22] Early articles about the band focused on Stipe's singing style (described as "mumbling" by The Washington Post), which often rendered his lyrics indecipherable.[23] Stipe commented in 1984, "It's just the way I sing. If I tried to control it, it would be pretty false."[24]

"That voice. It's an extraordinary voice," said U2's Bono in 2003.[25] "I often tell him I think he's a crooner, and he doesn't like that very much. But it is sort of one part some sort of Bing Crosby '50s laid-back crooner, and one part Dolly Parton," he added, laughing.

Stipe insisted that many of his early lyrics were "nonsense", saying in a 1994 online chat, "You all know there aren't words, per se, to a lot of the early stuff. I can't even remember them." In truth, many early R.E.M. songs had definite lyrics that Stipe wrote with care.[26] Stipe explained in 1984 that when he started writing lyrics they were like "simple pictures", but after a year he grew tired of the approach and "started experimenting with lyrics that didn't make exact linear sense, and it's just gone from there."[24] In the mid-1980s, as Stipe's pronunciation while singing became clearer, the band decided that its lyrics should convey ideas on a more literal level.[27] Mills explained, "After you've made three records and you've written several songs and they've gotten better and better lyrically the next step would be to have somebody question you and say, are you saying anything? And Michael had the confidence at that point to say yes . . ."[28] After what Stipe has referred to as "The Dark Ages of American Politics [The Reagan/Bush Years]", R.E.M. incorporated more politically oriented concerns into his lyrics on Document and Green. "Our political activism and the content of the songs was just a reaction to where we were, and what we were surrounded by, which was just abject horror," Stipe said later. "In 1987 and '88 there was nothing to do but be active."[29] While Stipe continued to write songs with political subject matter like "Ignoreland" and "Final Straw", later albums have focused on other topics. Automatic for the People dealt with "mortality and dying. Pretty turgid stuff", according to Stipe,[11] while Monster critiqued love and mass culture.[29]

Stipe normally does not play instruments, focusing more on his singing, but has played instruments on albums, including harmonica on Reckoning, synthesizer on New Adventures in Hi-Fi, guitar on Up and melodica on Out of Time, and has occasionally played guitar on some songs in concert. 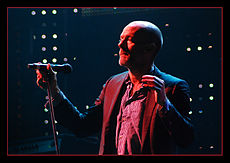 In early 1987 Stipe co-founded C00 Films with Jim McKay, a mixed-media company that was "designed to channel its founder's creative talents towards the creation and promotion of alternative film works."[30] Stipe and his producing partner, Sandy Stern, have served as executive producers on films including Being John Malkovich, Velvet Goldmine, and Man on the Moon.[31] He was also credited as a producer of the 2004 film Saved!.[32]

Stipe has made a number of acting appearances on film and on television. Stipe appeared in an episode of The Adventures of Pete & Pete as an ice cream man named Captain Scrummy. Stipe has appeared as himself with R.E.M. on Sesame Street playing a reworked version of "Shiny Happy People" called "Furry Happy Monsters", and appeared in an episode of The Simpsons titled "Homer the Moe", where R.E.M. was tricked into playing a show in Homer Simpson's garage. He also appeared as a guest on the Cartoon Network talk show spoof Space Ghost Coast to Coast in the episode 'Hungry'.

Stipe voiced Schnitzel the Reindeer in the 1999 movie Olive, the Other Reindeer.

In addition to co-producing most of R.E.M.'s output, Stipe has also produced the following: