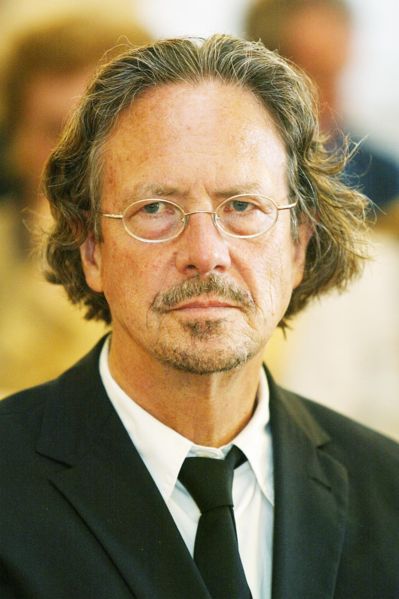 Handke and his mother (a Carinthian Slovene whose suicide in 1971 is the subject of Handke's "A Sorrow Beyond Dreams", a reflection on her life) lived in from 1944 to 1948 before resettling in Griffen. According to some of his biographers, his stepfather Bruno's alcoholism and the limited cultural scope in the small town have contributed to Handke's revolt against habitualness and restrictions.

Ever the , Peter Handke exemplifies the complexity of writing as an Austrian in the post WW2 period, and his work has continually provoked controversy and outrage on a variety of fronts.

While studying, he established himself as writer, linking up with the "Grazer Gruppe" (the Authors' Assembly), an association of young writers. The group published the literary digest "". Both and were among its members.

Handke abandoned his studies in 1965, when the German accepted his novel "Die Hornissen (The Hornets)" for publication.

He gained popular attention after a spectacular appearance at a meeting of artists belonging to the in Princeton, , U.S., where he presented his play "Publikumsbeschimpfung (Offending the Audience)".

He became one of the co-founders of the publishing house in 1969 and participated as a member of the group from 1973 to 1977.

Handke has written many scripts for films [http://www.imdb.com/name/nm0359563/] . He directed "Die Linkshändige Frau" ("The Left&ndash;Handed Woman"), which was released in 1978. "'s" description of the film is that a woman demands that her husband leave and he complies. "Time passes…and the audience falls asleep". This film was nominated for the Golden Palm Award at the in 1978 and won the Gold Award for German Art House Cinemas in 1980. Handke has also won the 1975 German Film Award in Gold for his screenplay "Falsche Bewegung."

During the 1980s, he travelled extensively, visiting amongst other places, , and .

When was awarded the in 2004, she stated that she considered Peter Handke a more worthy recipient than herself and that she had been awarded the prize merely because she is female.

In 1996 his travelogue "Eine winterliche Reise zu den Flüssen Donau, Save, Morawa und Drina oder Gerechtigkeit für Serbien" ("A Journey to the Rivers: Justice for Serbia") created considerable controversy, as Handke portrayed among the victims of the Balkan War. In the same , Handke also frontally attacked Western media for misrepresenting the causes and consequences of the war. This controversy still rages. Former n asked that Handke be summoned as witness for the defense before the , but the writer declined. He did, however, visit the tribunal as a spectator, and later published his observations in "Die Tablas von Daimiel, (The Tablas of Daimiel)".

On , in front of more than 20,000 mourners at the funeral of , Handke gave a speech in Serbian which sparked much controversy in the West. Handke later denied expressing "his happiness at being close to Milošević who defended his people". In fact, in a letter to the French "Nouvel Observateur" he offered a translation of his speech: "The world, the so-called world, knows everything about , . The world, the so-called world, knows everything about Slobodan Milošević. The so-called world knows the truth. This is why the so-called world is absent today, and not only today, and not only here. I don't know the truth. But I look. I listen. I feel. I remember. This is why I am here today, close to , close to , close to Slobodan Milošević". [http://archquo.nouvelobs.com/cgi/articles?ad=culture/20060503.OBS6399.html]

Handke's positions regarding the were challenged by the n writer and essayist and the two have engaged in a long polemic.

In 2006 Handke was nominated for the , but the prize money of €50,000 is subject to approval by the of . Members of the council's major parties stated they would vote against awarding the prize to Handke, resulting in the prize being withdrawn. [http://www.dw-world.de/dw/article/0,2144,2036907,00.html]

He has two daughters: Amina, from his relationship with Libgart Schwarz, and another daughter with Sophie Semin. Handke has been living with the German since 2001.

"Works in English translation are italicized."

"Many of Handke's works have been published in several English speaking countries by different publishers. Only one edition of each work is listed."