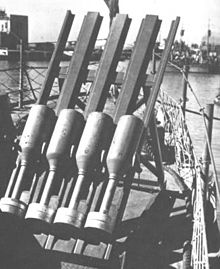 Mousetrap (ASW Marks 20 and 22) was an anti-submarine rocket used mainly during the Second World War by the U.S. Navy[1] and the U.S. Coast Guard.[2] Its development was begun in 1941 as a replacement for Hedgehog, a British-made projector, which was the first ahead-throwing ASW weapon. These, however, were spigot-launched, placing considerable strain on the launching vessel's deck, whereas Mousetrap was rocket-propelled. As a result, Mousetrap's four or eight rails for 7.2-inch (183 mm) rockets saved weight and were easier to install.

The rockets weighed 65 pounds (29 kg) each, with a 33-pound (15 kg) Torpex warhead and contact pistol, exactly like Hedgehog.

By the end of the war, over 100 Mousetrap Mark 22s were mounted in U.S. Navy ships, including three each on 12 destroyers[1], and submarine chasers (usually two sets of rails)[3].