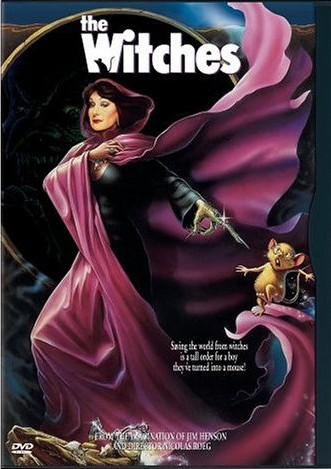 "The Witches" is a 1990 film based on the book of the same name by British author, .

The story begins with an old Norwegian woman, named Helga, telling her orphaned grandson, Luke, all about the witches. Witches are a well-connected organization of female whose goal is the elimination of as many children as possible. No motive is given, other than witches loath children. Helga tutors Luke on how to recognise a witch when he sees one though it is difficult as they are able to disguise themselves as human . Helga tells Luke a story about her childhood friend, Erica, a girl who fell victim to a witch and was never seen again.

Witches are quite bald, according to Helga, and wear wigs to hide their baldness; they also conceal their hands with gloves, and have feet with square ends and hideous stumps where the toes should be. Helga warns Luke to remember these things otherwise he will not survive. Helga tells Luke of "the most evil woman in creation", the , the leader of all the witches in the world and the most terrifying of all.

Shortly after the death of Luke's parents, Luke and Helga move back home to where Luke encounters a woman dressed in black, and is horrified to notice she has purple eyes, a trait that witches possess. The woman in black tries to coax Luke from his with a snake, but when Helga arrives the witch runs off, taking the snake with her.

After Luke's birthday, Helga falls ill and the doctor recommends a holiday by the seaside to recover. They move to a luxurious hotel in where an alleged "children's charity" is having their annual meeting. Luke grows bored and wanders around the hotel with his pet , William and Mary. He ends up in a wide, deserted and hides behind a screen to train his mice.

Suddenly the "charity", the "Royal Society for the Prevention of Cruelty to Children" convention, arrive and Luke is trapped in the ballroom with them. However as he is behind the screen they cannot see him. Helga's thorough education about witches makes Luke quickly realise the truth about the women in the room. The doors are locked before Luke can escape the room. An aristocratic woman who arrived earlier in the hotel, Miss Eva Ernst, takes her place upon the stage and begins to remove her own face. The witches unveil their true selves: removing wigs to reveal scalps; their gloves to reveal long, sharp ; and shoes to reveal revolting, deformed feet. Miss Eva Ernst removes her human face mask to reveal a hideous and hunchbacked body beneath her glamorous exterior. She is the .

The Grand High Witch is in an ugly mood; she is furious with the Witches of England for failing in their duties to annihilate the children. The Grand High Witch screams and shrieks orders, demanding that all the children of England must be wiped out before she returns within a year. One foolish witch voices her cynicalism of such an idea, and the enraged Grand High Witch reduces her to oblivion with a burning magic she shoots from her eyes. The Grand High Witch then orders all her servants to resign from their jobs and buy sweet shops with the money she will give them. She then tells them to lace their confectionary with a magic formula she will give them, called Formula 86, which turns whomsoever eats it into a mouse.

The Grand High Witch turns a greedy and obese boy, (lured there by the promise of six ), into an mouse as a demonstration of the method. The witches sniff out Luke, who manages to escape. He manages to get to his hotel room, but is captured by the Grand High Witch herself. She then pours an entire bottle of Formula 86&mdash;all 500 doses of it&mdash;down Luke's , resulting in another mouse with a human mind. Bruno and Luke meet in a vent.

Luke and Bruno manage to reach Helga's room safely, and Luke manages to steal a bottle of the potion from the Grand High Witch's room and use it against the witches by adding it to the soup reserved for the witches themselves (although part of Luke's tail is cut off with a carving knife by a panicked chef after he has been spotted). One of the hotel cooks is actually a witch, as proven by her purple eyes. She tastes the soup after the soup has been mixed with the formula, and turns into a mouse herself. She tries to warn the other witches of this, but is crushed and killed by them when they see her. A short time later they all start turning into mice.

Initially, panic ensues when mice suddenly appear in the dining room, but soon both hotel staff and guests are attacking and killing the rodents&mdash;unknowingly ridding England of its witches. The Grand High Witch however seems to be to the effects of the poison and advances menacingly upon Helga, until Bruno bravely leaps upon her and bites her, causing the potion to work. Eva Ernst is transformed into a hideous, deformed mouse and Helga insults her and condemns her for her evil. The Grand High Witch is finally destroyed when Mr. Stringer, the hotel manager, chops her in two with a meat cleaver. After Luke and Helga have returned home, one good witch, Miss Irvine (the Grand High Witch's former put-upon assistant), comes to Luke and Helga's house that night and uses her magic to restore him to human form, as well as returning his previously lost white mice. Seeing Miss Irvine outside, Luke shouts a reminder to her to also turn Bruno back into a human, to which Miss Irvine gives a reassuring smile before driving away. Her good deed also appears to change her fingers from clawed to human. With England's children now safe from the threat of witches, Luke and Helga begin making plans to return to the United States to destroy the witches there.

Differences from the book

* Felicity Dahl has stated that never again requested someone for a role in his book after the producers of "" denied his request to cast as the title character. But he was ecstatic when was cast as the Grand High Witch, as she had been Dahl's personal favourite for the role.
* This was the last movie to be personally overseen by , before his death in May 1990.
* Felicity Dahl states that Roald Dahl hated the happy ending. He apparently stood outside cinemas with a , telling people not to watch the film. It was the last of Dahl's books to be developed into a film before his death; he died just months after the film was released.
*The DVD subtitles contain many irregularities. For example:

In the dining room when the witches are turning into mice, the Grand High Witch says "My Formula 86"; the subtitles wrongly say "I can't get over the seats."

When the Grand High Witch is turning into a mouse, she says to Helga, "Next time...", but the subtitles read "It's time!".
* was considered for the role of the Grand High Witch before Anjelica Huston was cast.
* The whole section in the start of the movie (until they move to the ) is shot in Bergen in , and both Erica and Luke's grandmother Helga speak Norwegian in some parts. The street where they live is called Nykirkesmuget. The police officers drive Norwegian police cars with both Norwegian uniforms and license plates.
*Some of the witches in the convention room scene are actually played by men; they are sat in the rear seats and remain in the background of the movie.
* appears as an extra in the film, disguised as a .
*The UK showing of this movie cut two scenes out to secure a "PG" rating (some of the gorier shots of Luke turning into a and the Grand High Witch showing her bleeding as she removes her wig).
* It is hinted that the Grand High Witch and Helga know each other, with the Grand High Witch referring to Helga as 'an old adversary' and Helga informing the Grand High Witch as she transforms that "This time... it's "your" turn"; with this evidence, it can be assumed that, in unseen events- presumably the same encounter that cost Helga a finger-, the Grand High Witch attempted to eliminate Helga as a child, but failed.
* and are in talks of making a new movie based on the book. Guillermo del Toro says he wishes to stay more loyal to the book than the 1990 film did.
*Much of the film was shot on location in Cornwall.