A shtetl (Yiddish: שטעטל, diminutive form of Yiddish shtot שטאָט, "town", pronounced very similarly to the South German diminutive "Städtle", "little town"; cf. Middle High German: stetelîn, stetlîn, stetel) was typically a small town with a large Jewish population in Central and Eastern Europe until The Holocaust. Shtetls (Yiddish plural: שטעטלעך, shtetlekh) were mainly found in the areas which constituted the 19th century Pale of Settlement in the Russian Empire, the Congress Kingdom of Poland, Galicia and Romania. A larger city, like Lemberg (Lviv) or Czernowitz, was called a shtot (Yiddish: שטאָט); a smaller village was called a dorf (Yiddish: דאָרף).

The concept of shtetl culture is used as a metaphor for the traditional way of life of 19th-century Eastern European Jews. Shtetls are portrayed as pious communities following Orthodox Judaism, socially stable and unchanging despite outside influence or attacks. The Holocaust resulted in the disappearance of the vast majority of shtetls, through both extermination under Nazi occupation and exodus to the United States and Palestine - as well as to the main cities of Russia, opened to Jewish habitation with the fall of the Cazrist regime.

It is estimated that around 90% of Polish Jews were exterminated or killed during the Holocaust. Just before World War II 3 - 3.5 million Jews lived in Poland alone. From that total only an estimated 100 - 200 thousand survived the war. Most of the rest were killed in Nazi German Extermination Camps, or Jewish Ghettos.[citation needed] 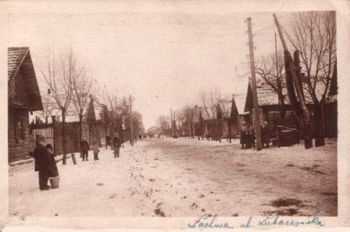 The history of the oldest Eastern European shtetls began about a millennium ago and saw long periods of relative tolerance and prosperity as well as times of extreme poverty, hardships until pogrom in XIX century, inspired by Russian Tsars.

The attitudes and thought habits characteristic of the learning tradition are as evident in the street and market place as the yeshiva. The popular picture of the Jew in Eastern Europe, held by Jew and Gentile alike, is true to the Talmudic tradition. The picture includes the tendency to examine, analyze and re-analyze, to seek meanings behind meanings and for implications and secondary consequences. It includes also a dependence on deductive logic as a basis for practical conclusions and actions. In life, as in the Torah, it is assumed that everything has deeper and secondary meanings, which must be probed. All subjects have implications and ramifications. Moreover, the person who makes a statement must have a reason, and this too must be probed. Often a comment will evoke an answer to the assumed reason behind it or to the meaning believed to lie beneath it, or to the remote consequences to which it leads. The process that produces such a response—often with lightning speed—is a modest reproduction of the pilpul process.[1]

Not only did the Jews of the shtetl speak a unique language (Yiddish), but they also had a unique rhetorical style, rooted in traditions of Talmudic learning:

In keeping with his own conception of contradictory reality, the man of the shtetl is noted both for volubility and for laconic, allusive speech. Both pictures are true, and both are characteristic of the yeshiva as well as the market places. When the scholar converses with his intellectual peers, incomplete sentences, a hint, a gesture, may replace a whole paragraph. The listener is expected to understand the full meaning on the basis of a word or even a sound... Such a conversation, prolonged and animated, may be as incomprehensible to the uninitiated as if the excited discussants were talking in tongues. The same verbal economy may be found in domestic or business circles.[1]

The shtetl operates on a communal spirit where giving to the needy is not only admired, but expected and essential:

The problems of those who need help are accepted as a responsibility both of the community and of the individual. They will be met either by the community acting as a group, or by the community acting through an individual who identifies the collective responsibility as his own... The rewards for benefaction are manifold and are to be reaped both in this life and in the life to come. On earth, the prestige value of good deeds is second only to that of learning. It is chiefly through the benefactions it makes possible that money can "buy" status and esteem.[1]

On three things the world stands. On Torah, On service [of God], And on acts of human kindness.[2]

Tzedaka (charity) is a key element of Jewish culture, both secular and religious, to this day. It exists not only as a material tradition (e.g. tzedaka boxes), but also immaterially, as an ethos of compassion and activism for those in need.

Material things were neither disdained nor extremely praised in the shtetl. Learning and education were the ultimate measures of worth in the eyes of the community, while money was secondary to status. Menial labor was generally looked down upon as prost, or prole. Even the poorer classes in the shtetl tended to work in jobs that required the use of skills, such as shoe-making or tailoring of clothes. The shtetl had a consistent work ethic which valued hard work and frowned upon laziness. Studying, of course, was considered the most valuable and hardest work of all. Learned yeshiva men who did not provide bread and relied on their wives for money were not frowned upon but praised as ideal Jews. 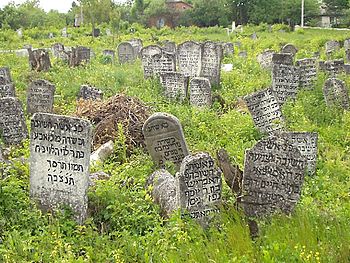 Old Jewish cemetery in the shtetl of Medzhybizh, Ukraine.

The May Laws introduced by Tsar Alexander III of Russia in 1882 banned Jews from rural areas and towns of fewer than ten thousand people. In the 20th century revolutions, civil wars, industrialization and the Holocaust destroyed traditional shtetl existence. However, Hasidic Jews have founded new communities in the United States, such as Kiryas Joel and New Square.

There is a belief found in historical and literary writings that the shtetl disintegrated before it was destroyed during World War II; however, this alleged cultural break-up is never clearly defined.[who?][3]

The shtetl in fiction and folklore

The 2002 novel Everything Is Illuminated, by Jonathan Safran Foer, tells a fictional story set in the Ukrainian shtetl Trachimbrod. (Trochenbrod)

The 1992 children's book Something from Nothing, written and illustrated by Phoebe Gilman, is an adaptation of a traditional Jewish folktale set in a fictional shtetl.

In 1996 the Frontline programme Shtetl broadcast; it was about Polish Christian and Jewish relations.[4] 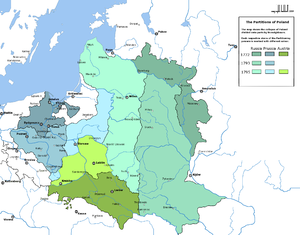 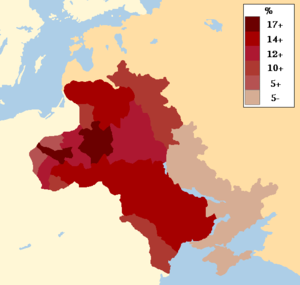 Map of the Pale of Settlement
Main articles: List of shtetls, List of villages and towns depopulated of Jews during the Holocaust, and :Category:Shtetls