E-Man is a fictional comic book superhero created by writer Nicola Cuti and artist Joe Staton for Charlton Comics in 1973. Though the character's original series was short-lived, the lightly humorous hero has become a cult-classic sporadically revived by various independent comics publishers.

The character premiered in E-Man #1, the first of ten issues (Oct. 1973 - Sept. 1975) published by the Derby, Connecticut-based Charlton Comics. For the last four, artist Staton created painted covers, a comics rarity at the time.

The stories were humorous and lighthearted, in the style of Plastic Man, especially as E-Man could form himself into anything he wanted. 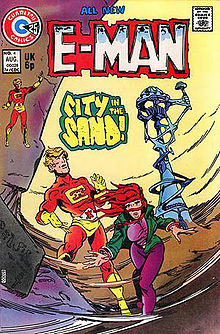 Backup features were Cuti and Tom Sutton's "The Knight", starring a superspy agent of C.H.E.S.S.; Joe Gill and Steve Ditko's "Liberty Belle"; two stories of writer-artist Ditko's superhero "Killjoy"; the time-traveling "Travis", by Cuti and Wayne Howard; and, in the color-comics debut of John Byrne, three stories of "Rog-2000", written by Cuti and starring a wiseacre, cigar-smoking robot Byrne had created in his fan-artist days.

A supporting character, the grubby but right-hearted detective Mike Mauser, got his own backup series in Charlton's Vengeance Squad. An additional E-Man story, which introduced his energy-being "sister", Vamfire, appeared in the company's in-house fan magazine, Charlton Bullseye #4.

In 1977, six issues were reprinted under the Modern Comics label for sale as bagged sets in discount department stores such as North America.

In 1983, during a period of financial uncertainty for Charlton, the company sold independent publisher First Comics the rights to E-Man. First's E-Man ran 25 issues (April 1983 - Aug. 1985), with the company also publishing a seven-issue miniseries, The Original E-Man and Michael Mauser, that reprinted those characters' Charlton stories.

Staton did the artwork, with stories written by Martin Pasko, Paul Kupperberg, Cuti, and Staton himself. In the course of the run, Staton acquired the copyright to the character from First, although First Comics retained ownership of those stories that had been published by them. 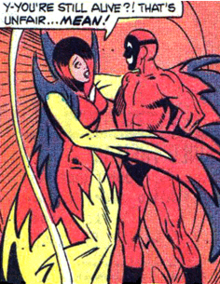 Several years after the cancellation of the First Comics series, Comico published an E-Man one-shot (Sept. 1989) by Cuti & Staton, followed by a three-issue miniseries (Jan.-March 1990). After Comico's demise, Alpha Productions did a one-shot in (Sept. 1993), as well as three ashcan previews of that issue.

E-Man appeared in the two-page story "Come and Grow Old With Me", by Cuti and Staton, published in the magazine Comic Book Artist #12 (March 2001).

Cuti & Station reteamed for two one-shots by Digital Webbing Press published the one-shots E-Man: Recharged (Oct. 2006) and E-Man: Dolly (Sept. 2007), each with Cuti & Staton as the creative team.[1] The indicia for each listed E-Man as copyrighted by "Joe Staton/First Comics".

E-Man is a sentient packet of energy thrown off by a nova. Traveling the galaxy he learned about life, how to duplicate the appearance of life, and good and evil. Reaching Earth, he met exotic dancer/grad student Katrinka Colchnzski (who attended Xanadu University), also known as Nova Kane (novocaine), and formed himself into a superhero dubbed E-Man, with a civilian identity dubbed "Alec Tronn" (electron). His emblem was the famous mass-energy equivalence formula "E=mc2", and his powers included firing energy blasts from his hands, changing his appearance, and transforming part or all of his body into anything he could envision (e.g., turning his feet into jet engines so he could fly).

Nova would later be caught in a nuclear explosion and gain the same powers as E-Man and become his partner; later still, she would lose her powers and become a normal human being again, only to regain her powers sometime afterward. During their early adventures they picked up a pet koala named Teddy Q, whose intelligence grew to the point where he had a job waiting tables in a cafe.