Order of St Elizabeth of Hungary

Order of St Elizabeth of Hungary 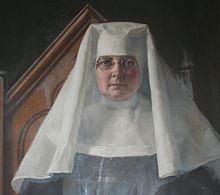 The Order of St Elizabeth of Hungary was an Anglican order of nuns in the Franciscan tradition, founded in London in 1916.

The Order was founded, as an offshoot of the Confraternity of Divine Love, in 1916. Reverend Mother Elizabeth (Elizabeth Hodges) was the founder both of the Confraternity and of the Order in its final form. The Order is now “under the care” of the Anglican Community of St Peter (founded 1861), which is based at St Peter’s Convent, Maybury Hill, Woking, Surrey.

The Visitor of the Order in 1923 was the Bishop of London. It also had a male chaplain (women not being ordained in those days) and a Warden who, in 1923, was the Rev. and Hon. E. Lyttleton DD.

The Order took its name from the 13th century saint and princess Elizabeth of Hungary (Elizabeth of Thuringia), who was influenced by the early Franciscans and lived a religious life in Marburg.

The English Order of St Elizabeth of Hungary was devoted mainly to mission work among the poor of Southwest London. It was based at 94 Redcliffe Gardens, London SW10, and had retreat houses at Oakhurst, Erith and St Mary's Retreat, Heathfield. It also had a children's home and guest house at 10 Earl's Court Square, London. The sisters undertook missions to women and girls, and were responsible for Church Girl's Institutes as well as Children's Homes.

The sisters observed a fruitarian diet (i.e. a diet which allows only food which leaves the plant alive, including tomatoes, for example, but excluding carrots) and were committed to absolute poverty, which prevented them from possessing any property or invested funds. However, it seems that the Order as a body attracted substantial financial support.

Little Grey Sparrow of the Anglican Diocese of Bunbury, Western Australia by Merle Bignall (1992) deals with the history of the Order with particular reference to its work in Australia, which began in the 1920s. The Sisters of the Order referred to themselves as Sparrows and wore grey habits.

The archives of the Order of St Elizabeth of Hungary for the period 1904-1990 are held at Lambeth Palace Library in London under reference 3862-93.