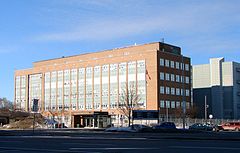 The CSEC was established in 1946 as the Communications Branch of the National Research Council (CBNRC), and was transferred to the DND in 1975 by an Order in Council. The origins of the CSEC can be traced back to the Second World War where the civilian organization worked with intercepted foreign electronic communications, collected largely from the Canadian Signal Corps station at Rockcliffe airport in Ottawa. CSEC also worked with CFS Leitrim, located just south of Ottawa, which is Canada's oldest operational signal intelligence collection station. Established by the Royal Canadian Corps of Signals in 1941 as 1 Special Wireless Station and renamed Ottawa Wireless Station in 1949, CFS Leitrim acquired its current name when the Supplementary Radio System (SUPRAD) was created in 1966. In 1946, the station's complement was 75 personnel. The current strength (2005) is 450 military personnel and 28 civilian employees. This unit successfully decrypted, translated, and analyzed these foreign signals, and turned that raw information into useful intelligence reports during the course of the war.

The CSEC and the information it gathered and shared was secret for 34 years, when the CBC program The Fifth Estate did a story on the organization[citation needed], resulting in an outcry in the Canadian House of Commons and an admission by the Canadian government that the organization existed. The CSEC is now publicly known, and occupies several buildings in Ottawa, including the well-known Edward Drake Building and the neighbouring Sir Leonard Tilley Building.

During the Cold War, CSEC was primarily responsible for providing SIGINT data to the Department of National Defence regarding the military operations of the Soviet Union. Since then, CSEC has diversified and now is the primary SIGINT resource in Canada. The CSEC also provides technical advice, guidance and services to the Government of Canada to maintain the security of its information and information infrastructures.

In early 2008, in line with the Federal Identity Program (FIP) of the Government of Canada, which requires all federal agencies to have the word Canada in their name,[1] CSE adopted the applied title Communications Security Establishment Canada (CSEC) or (French: Centre de la sécurité des télécommunications Canada) (CSTC).

The Examination Unit was established on June 1941 as a branch of the National Research Council of Canada. At that time the main station for the unit was a house near the Prime Minister's Laurier Avenue residence. The unit chose this location because they felt it would draw no suspicion to the enemies. The original mandate of the Examination Unit was to intercept the communications of Vichy France and Germany. Its mandate later expanded to include interception and decryption of Japanese communications after Japan entered World War II. The unit was estimated to have been comprised 45 staff members.

In September of 1945, U.S. president Truman declared that it was vital that peace time signal intelligence (SIGINT) operations be carried out. Later on in December of that same year, Canadian authorities came to this conclusion also. For this reason, the Examination Unit was renamed the Communications Branch.[2]

CSEC’s SIGINT program produces intelligence that responds to Canadian government requirements. At CFS Leitrim, the main SIGINT coalition CSEC facility in the south end of Ottawa, the establishment collects foreign intelligence that can be used by the government for strategic warning, policy formulation, decision-making in the fields of national security and national defence, and day-to-day assessment of foreign capabilities and intentions. The station at Leitrim specializes in intercepting electronic communications to and from embassies in Ottawa. Other CSEC SIGINT facilities are located at: CFB Gander Newfoundland with a detachment from CFS Leitrim, CFS Masset, BC (under remote control from CFS Leitrim) and CFS Alert, Nunavut.

The success of this process is founded on CSEC’s understanding of the leading-edge technologies used by the global information infrastructure. CSEC relies on its closest foreign intelligence allies, the US, UK, Australia and New Zealand to share the collection burden and the resulting intelligence yield. Canada is a substantial beneficiary of the collaborative effort within the partnership to collect and report on foreign communications.

During the Cold War, CSEC’s primary client for signals intelligence was National Defence, and its focus was the military operations of the then Soviet Union. Since the end of the Cold War, Government of Canada requirements have evolved to include a wide variety of political, defence, and security issues of interest to a much broader range of client departments.

While these continue to be key intelligence priorities for Government of Canada decision-makers, increasing focus on protecting the safety of Canadians is prompting greater interest in intelligence on transnational issues, including terrorism.

CSE code breaking capabilities degraded substantially in the sixties and seventies but were upgraded with the acquisition of a Cray X-MP/11 (modified) supercomputer delivered to the Sir Leonard Tilley building in March 1985 and the hiring of code breaking analysts. It was, at the time, the most powerful computer in Canada. In the early 1990s, the Establishment purchased a Floating Point Systems FPS 522-EA supercomputer at a cost of $1,620,371. This machine was upgraded to a Cray S-MP superserver after Cray acquired Floating Point Systems in December in 1991 and used the Folklore Operating System supplied by the NSA in the US.[3] These machines are now retired. Little information is available on the types of computers used by the CSEC since then. However, Cray in the US has produced a number of improved supercomputers since then. These include the Cray SX-6, early 2000s, the Cray X1, 2003 (development funded in part by the NSA), Cray XD1, 2004, Cray XT3, Cray XT4, 2006, Cray XMt, 2006 and Cray CX1, 2008. It is possible that some of these models have been used by the CSEC and are in use today. -note: Distinctions should be made between Cray Research, Inc (acquired by SGI) and Cray Computer (a different company founded by Seymour Cray after he left Cray Research.

Formerly known as communications security (COMSEC), the CSEC’s IT Security Program grew out of a need to protect sensitive information transmitted by various agencies of the government, especially the Department of Foreign Affairs and International Trade (DFAIT), Canada Border Services Agency (CBSA), DND, and the Royal Canadian Mounted Police (RCMP). As a result of this critical and urgent need, the IT Security program’s strategic stance has made possible a shift to that of a predictive nature allowing the program to provide relevant knowledge based upon sound practices and forward looking solutions.

The CSEC’s IT Security Program has earned highly valued global respect and a reputation of technical excellence. It now extends its expertise past its traditional technical clients to those within the Government of Canada who are responsible for the formulation and implementation of policy and program managers, and is committed to ensuring cyber networks and critical infrastructures are trustworthy and secure. CSEC also conducts research and development on behalf of the Government of Canada in fields related to communications security.

The Anti-Terrorism Act also strengthened CSEC's capacity to engage in the war on terrorism by providing needed authorities to fulfill its mandate.

CSEC is forbidden, by law, to intercept domestic communications. When intercepting communications between a domestic and foreign source, the domestic communications are destroyed or otherwise ignored (however, after the September 11, 2001 attacks on the United States, CSEC's powers expanded to allow the interception of foreign communications that begin or end in Canada, as long as the other party is outside the border and ministerial authorization is issued specifically for this case and purpose[4]). CSEC is bound by all Canadian laws, including the Criminal Code of Canada, the Charter of Rights and Freedoms, and the Privacy Act.

The Office of the Communications Security Establishment Commissioner (OCSEC) was created on June 19, 1996, to review CSE's activities for compliance with the applicable legislation, accept and investigate complaints regarding the lawfulness of the agency's activities, and to perform special duties under the 'Public Interest Defence' clause of the Security of Information Act.[5] Once a year, the Commissioner provides a public report on his activities and findings to Parliament, through the Minister of National Defence.

As of 2010, there have been five Commissioners:

With the rapid expansion in the number of CSEC personnel since the 9/11 attack in the US, the existing CSEC facilities are no longer sufficiently large. A new C$880 million, 72,000 sq. m. facility will be built in SE Ottawa, immediately west of the headquarters building for the Canadian Intelligence and Security Service (CSIS) with construction expected to begin in early 2011 and completed in 2015. Plans indicate that there will be a secure physical connection between the two buildings allowing for the passage of personnel between them. [8]

In Proceedings of the Canadian Senate Standing Committee on National Security and Defence|Standing Senate Committee on National Security and Defence, CSE Chief John Adams, indicated that the CSE is collecting communications data when he suggested that the legislation was not perfect in regard to interception of information relating to the "envelope".[9]

Under the 1948 UKUSA agreement, CSEC's intelligence is shared with the United States National Security Agency (NSA), the British Government Communications Headquarters (GCHQ), the Australian Defence Signals Directorate (DSD) and New Zealand's Government Communications Security Bureau (GCSB). Along with these services from the United States, the UK, New Zealand and Australia, CSEC is believed to form the ECHELON system. Its capabilities are suspected to include the ability to monitor a large proportion of the world's transmitted civilian telephone, fax and data traffic. The intercepted data, or "dictionaries" are "reported linked together through a high-powered array of computers known as ‘Platform’.[10]

There has been some criticism over the years of CSEC.

A former employee of the organization, Mike Frost, claimed in a 1994 book, Spyworld, that the agency eavesdropped on Margaret Trudeau to find out if she smoked marijuana and that CSEC monitored two of former British prime minister Margaret Thatcher's dissenting cabinet ministers in London on behalf of the UK's secret service.[11]

In 1996, it was suggested that CSEC had monitored all communications between National Defence Headquarters and Somalia, and were withholding information from the Somalia Inquiry into the killing of two unarmed Somalis by Canadian soldiers.[12]

In 2006, CTV Montreal’s program On Your Side conducted a three-part documentary on CSEC naming it “Canada’s most secretive spy agency” and that “this ultra-secret agency has now become very powerful”, conducting unlawful surveillance by monitoring phone calls, e-mails, chat groups, radio, microwave, and satellite.[13]

In 2007, former Ontario lieutenant-governor, James Bartleman, testified at the Air India Inquiry on May 3 that he saw a CSEC communications intercept warning of the June 22, 1985 bombing of Air India Flight 182 before it occurred. Two former CSEC employees, Bill Sheahan (CSEC Client Relations Officer) and Pierre LaCompte (CSEC Liaison Officer), have since testified that no CSEC report was ever produced.[14]