Malakoff
For other uses and homophones, see Malakhov.

Malakoff is a suburban commune in the Hauts-de-Seine department southwest of Paris, France. It is located 5 km (3.1 mi) from the centre of the city. 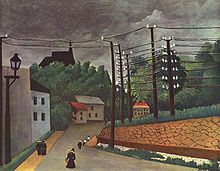 Malakoff on a painting by Henri Rousseau.

Malakoff is also served by Vanves – Malakoff station on the Transilien Paris – Montparnasse suburban rail line. This station is located at the border between the commune of Malakoff and the commune of Vanves, on the Vanves side of the border.