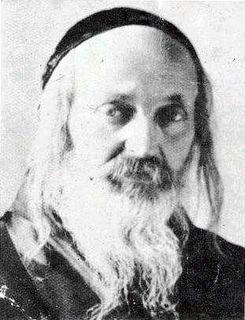 
website =
footnotes = Rabbi Joel (Yoel) Teitelbaum, ( _he. יואל טייטלבוים) (born 1887, died , ), known as Reb Yoelish or the Satmar Rav (or Rebbe), was a prominent Hungarian Hasidic and ic scholar. He was probably the best known Haredi opponent of all forms of modern political . But his opposition to Zionism was only part of a much wider approach to Judaism that revivified many Hungarian and n Jewish survivors of the and led to a renaissance of the 'Ungarish' (Hungary-originated) Hasidic community.

Teitelbaum was the second and youngest son, and fifth child of, Grand Rabbi (died 1904), who served as the rabbi of in (at that time ). A spirited child, he was renowned from a young age for his sharp tongue and brilliant analytical skills. During the 1920s, he served as the rabbi of Krole (Nagykaroly or ) near Satmar (). In 1928, he was invited to become the rabbi of Satmar, but vigorous opposition to his appointment led to bitter fighting and he was unable to take up his position until 1934. Upon his departure from Krole, the local community appointed Rabbi Abishel Horowitz, a son-in-law of the Spinka Rebbe. Teitelbaum was opposed to Horowitz's appointment - mainly because those who had appointed him were eager to change various decrees that Teitelbaum had imposed on the Krole Jewish community - and he nominated another successor in his place, his relative 'Rabbi Shmual Gross'. As a result of Teitelbaum's interference in the affairs of the community after his departure, a nasty feud developed between his devotees and the hasidim of Spinka - who supported Horowitz. The feud smoldered on right up until the community was destroyed during the . Horowitz himself was murdered in . After , Horowitz's son, (aka 'Reb Hershele Spinker'), became the Spinka Rebbe of Williamsburg, NY. He reconciled with Teitelbaum and they maintained cordial relations.

By the age of 17, he married Chavah, the daughter of Rabbi Abraham Chaim Horowitz, the Plantcher Rav. She died in the 1920s and, after a couple of years, he remarried to Alte Faige née Shapiro. He had three daughters from his first marriage: Esther, Rachel and Roysele. They all died in his lifetime: Esther died during childhood; Rachel died 6 months after she married her first cousin, R' Zalmen Leib Teitelbaum, the Rav of Sighet; and Roysele (the only of his children to survive the holocaust), who married R' Lipa Teitelbaum, the Semihaya Rav, and died in 1953 in the US. His second wife did not bear him any children. Thus, whilst his second wife survived him, he was not survived by any children. This was the source of a succession dispute after his death.

Teitelbaum was rescued from death in during 1944 in Nazi-controlled as a result of a deal between a Hungarian Zionist official, Rudolph Kastner, and a deputy of . Although Kastner intended to rescue only Hungarian Zionists on a special train bound for , Teitelbaum and a few other religious Jews were also given seats. (Some of Teitelbaum's followers believe it was the result of a dream in which Kastner's father-in-law was informed by his late mother that if Teitelbaum were not included on the train, none of the passengers would survive.) "En route", the train was re-routed by the Germans to , where the 1600 passengers languished for four months while awaiting further negotiations between rescue activists and the Nazi leadership. In the end, the train was released and continued on to Switzerland.

Teitelbaum briefly lived in after World War II, but, at the request of some of his followers who had emigrated to the , he settled there instead. He attracted many new followers and established a large community in the densely Orthodox neighborhood of Williamsburg located in northern in . Starting in the 1960s, he searched for a location outside of the city to establish a new self-contained community for his disciples and their families, eventually deciding upon where a new town known as "Kiryas Joel" was launched. The name "Kiryas Joel" means "Town of Joel" which alludes to the awe in which he was held by his adherents. Upon his death, he was the first individual to be buried there in 1979. Reputedly over 100,000 s attended his funeral. He was succeeded by his nephew Rabbi Moshe Teitelbaum, who divided the control of the Williamsburg and Monroe Satmar communities between two of his own sons.

Teitelbaum's works include collections of and "novelae" (scholarly contributions to ic debates) entitled "Divrei Yoel" and "Al HaGeulah V'Al HaTemurah" this was written with the help of the late Rabbi N.Y. Meisels. He also authored a brief introduction to the Talmudic tractate "Shabbos" for a Holocaust-era printing in Romania. His exposition of his belief that is prohibited by "" ("Jewish law") is entitled "VaYoel Moshe". There are also collections of his speeches entitled, "Hidushei Torah MHR"I Teitelbaum".

He loved scholars and sharp people, and visionaries like the great Reb and Reb .

Teitelbaum was renowned for his vocal religiously motivated opposition to Zionism in all arenas. This approach was a continuation of his father's views and of other prominent Hasidic rabbis. His father and predecessor was Rabbi . He encouraged his followers to form self-sufficient communities without the help of the and forbade "official" engagement with it.

Before World War II, most Hasidic rabbis, as well as many other prominent Orthodox leaders, believed that God had promised to return the ish people to the by means of the actions of the who would be sent if the Jewish people merited his arrival. During the current exile, the Jewish people are expected to perform the mitzvot. In addition, they are advised not to antagonize or rebel against the nations of the world in the course of their long exile in the . In the years following the Holocaust, Teitelbaum undertook to maintain and strengthen this position, as did many Torah Jews and communities.

In the view of Rebbi Teitelbaum's followers, the current , that was founded by people that included some anti-religious personalities and in seeming violation of the traditional notion that Jews should wait for the Jewish Messiah, is seen as contrary to as Satmar Hasidism understands it to be. Moreover, the Satmar Rebbe taught that the existence of the Zionist State of Israel is preventing the Messiah from coming.

The core citations from classical Judaic sources cited and utilized by Teitelbaum in his ideological war of words against modern Zionism are based on an important teaching from the in tractate Kethuboth 111a: Based on a passage from the in the () wherein God made the Israelites promise "to wait for Him before arousing his love."

:" in Song of Songs thrice adjured the "daughters of " not to arouse or bestir the love until it is ready." The Talmud explains that we have been foresworn, by three strong s not to ascend to the as a group using force, not to rebel against the governments of countries in which we live, and not by our sins, to prolong the coming of moshiach; as is written in Tractate Kesubos 111a ." [http://www.jewsagainstzionism.com/zionism/3strongoaths.cfm]

The Zionist State of Israel then, is seen by Satmar Hasidim as a form of "impatience" and in keeping with the Talmud's warnings that being impatient for God's love leads to "grave danger", Satmar Hasidism explains that the constant wars in Israel are seen as "fulfilment" of that prophecy.

Thus, Teitelbaum saw his opposition to Zionism as a way of protecting Jewish lives and preventing bloodshed. Although some Haredi rabbis may agree with this idea, the general view of and many other orthodox rabbis is that for all practical purposes, through participating in the Israeli government, efforts can be made to promote religious Judaism in Israel. Rabbi Teitelbaum, however, felt that any participation in the Israeli government, even voting in elections, was a grave sin, because it contributes to the spiritual and physical destruction of innocent people. He was openly opposed to the views of Agudath Israel, and until the present time, the official Satmar movement refuses to become a member of the Agudath Israel organization or party. The Satmar view is that only the Jewish Messiah can bring about a new Jewish government in the , and even if a government declaring itself religious would be formed before the Messiah, it would be illegitimate due to its improper arrogation of power.

While the Satmar Hasidim are opposed to the present secular government of Israel, many of them live in and visit Israel. Teitelbaum himself lived for about a year in after his escape from , but before the establishment of the State of Israel, and visited Israel after moving to the United States.

* [http://www.ou.org/about/judaism/rabbis/teitelbaum.htm Biography] at OU.org
* [http://www.tzemachdovid.org/gedolim/jo/tpersonality/satmarrav.html "My Neighbor, My Father, The Rebbe"]
* [http://www.findagrave.com/cgi-bin/fg.cgi?page=gr&GSln=Teitelbaum+&GSbyrel=all&GSdyrel=all&GSob=n&GRid=14157382& His grave on "Find a grave"]