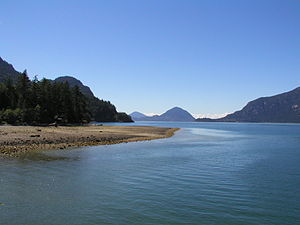 The British Columbia Coast or BC Coast is Canada's western continental coastline on the Pacific Ocean. The usage is synonymous with the term West Coast of Canada.

The aerial distance from Victoria on the Strait of Juan de Fuca to Stewart, British Columbia on the Alaska border at the head of the Portland Canal is 965 kilometres (600 mi) in length. However, because of its many deep inlets and complicated island shorelines—and 40,000 islands of varying sizes, including Vancouver Island and Haida Gwaii —the total length of the British Columbia Coast is over 25,725 kilometres (15,985 mi), making up about 10% of the Canadian coastline at 243,042 kilometres (151,019 mi).[1][citation needed] The coastline's geography, which is shared with the Alaska Panhandle and adjoining parts of northwest Washington, is most comparable to that of Norway and its heavily indented coastline of fjords, a landscape also found in southern Chile.

The dominant landforms of the BC Coast are the Insular Mountains, comprising most of Vancouver Island and Haida Gwaii, and the Coast Mountains, which extend beyond into Alaska and the Yukon.

The British Columbia Coast is mostly part of the Pacific temperate rain forests ecoregion as defined by the World Wildlife Fund. In the system used by Environment Canada, established by the Commission for Environmental Cooperation (CEC), the area is defined as the Pacific Maritime Ecozone. In the geoclimatic zones system used by the British Columbia Ministry of Forests the bulk of the region comprises the Coastal Western Hemlock biogeoclimatic zone, although small areas flanking the Strait of Georgia at the coast's southern extremity are classed in the Coastal Douglas-fir zone.

The great fjords of the British Columbia Coast rival those of Norway in length and depth but have even higher mountain scenery with a more alpine flavour. Many of the mountains offshore are much larger than those along the Norwegian coast, many large enough to have major fjords of their own, as well as their own mountain ranges. This is also of course even more true of the very large islands farther offshore, Vancouver Island and Graham and Moresby Islands in Haida Gwaii, which together form the Insular Mountains, distinct from the Coast Mountains of the mainland.

Here are the most important fjords, inlets, straits and sounds, including those important for reasons other than their size, listed south to north:

The many fjord-like waterways between the coast and the islands, and within the archipelago, cannot be fully listed here, and there are many more others that are not so much fjord-like as flooded valleys between what had been mountain peaks many thousands of years ago, when the shoreline was lower.

The waterway route through these islands between Vancouver and Prince Rupert, and between Seattle, Washington, and Alaska, is known as the Inside Passage. It has played a role in U.S.-Canada relations more than once, from the Klondike Gold Rush to the Salmon War of the 1990s.

Major and important waterways are:

The Gulf Islands continue southeast across the Haro Straits as the San Juan Islands.

The islands of Howe Sound are classed among the southern Gulf Islands, but they adjoin the mainland rather than Vancouver Island and are usually considered separately. They are:

The islands of the Fraser River estuary are:

Research from the 1990s has indicated that the Ice Age-era coastline of the British Columbia Coast was lower by about 100 metres (330 ft). The effect of the waterlevel on the coastline was such that the Queen Charlotte Strait, which is between Haida Gwaii and the northern end of Vancouver Island, was a coastal plain, as were all the straits inland from it, except for those that were mountain valleys. Underwater archaeology has shown the presence of permanent human habitations and other activity at the 100-metre (330 ft) contour, and the Ice Age existence of such a coastal plain has put a new light on Ice Age populations in North America as well as on the strong likelihood of this area having been the major migration route from (and perhaps to) Asia.

The heavy indentation and mild climate of the British Columbia Coast have led to inevitable comparisons with the geography's predisposition to encouraging increased human settlement and movement as well as cultural foment and population growth in the Aegean, the Irish Sea/Hebrides and in the Danish Archipelago and adjoining Scandinavian coasts. The natural fecundity of the environment—rich in seafood, game and greenery—combined with the ease of travel (by water) is seen in all cases (British Columbia, Denmark, Greece) to have generated a dynamic and gifted civilization. And there are comparisons to be made between the artistic and political and social level of the Pacific Northwest Peoples and those of pre-Conversion pagan Scandinavia, Ireland and Archaic-Era Greece.

The fishery of the Pacific Northwest Coast is legendary, especially for its many salmon runs and the cultures that built on top of them throughout the region. Salmon runs have greatly diminished since pre-Contact years and the advent of commercial canning and, ultimately, depletion of stocks by high-seas fishing.

Scheduled Passenger Services operating on the British Columbia Coast are dominated by BC Ferries and Alaska State Ferries.

Dozens of smaller ferries ply lesser routes between the Gulf Islands and the mainland or Vancouver Island as well as on various lakes in the Interior where no bridges exist. Other runs connect Horseshoe Bay to the Sunshine Coast and Bowen Island and the lower Sunshine Coast to the Powell River section of that coast farther northwest. From there, a ferry operates to Comox.

Other scheduled passenger services are run by various small shipping and water-taxi companies.

Non-scheduled passenger services include all major cruise lines and various small luxury craft sharters, as well as shuttles to and from the various coastal resorts.

Nations of the Alaska Panhandle and Georgia Strait-Puget Sound are included as they are part of the same cultural and historical ecumene. Extinct peoples are not included.