The Bank of America Theatre is a theater operated by Broadway In Chicago, a Nederlander Presentation. Formerly known as the LaSalle Bank Theatre, the Sam Shubert Theatre and the Majestic Theatre, it is located at 18 West Monroe Street in the Loop area of downtown Chicago, Illinois. The theater presents touring Broadway shows.

The theatre opened in 1906 as the Majestic Theatre, named for The Majestic Building in which it was housed. The Majestic was originally a popular vaudeville theater. It offered some 12-15 vaudville acts running from 1:30 pm to 10:30 pm, six days a week. By the 1920s the theater had become part of the Orpheum Circuit and presented many famous vaudeville headliners including Eddie Foy, Harry Houdini, Lily Langtry, and Mabel McKinley.

In 1932, the theatre closed during the Great Depression. In 1945, the theatre was purchased by the Shubert Organization, remodeled, and reopened as the Sam Shubert Theatre. The building was sold to the Nederlander Organization in 1991[1] however the land continued to be owned by Chicago Public Schools until 1997 when it also was purchased by Nederlander.[2] Between January 2005 and May 2006, the theatre underwent restoration and a name change to the LaSalle Bank Theatre and floors 4-21 of the adjoining office building were converted to a hotel.[3] Since 2000, the theatre has been operated by Broadway In Chicago and has hosted pre-Broadway productions and world premieres.[4] In May 2008, the theater was renamed the Bank of America Theatre, as LaSalle Bank was acquired by that company in 2007.

Being the first theater built in Chicago after the Iroquois Theatre fire, the LaSalle Bank Theatre was specially credited for its fire safety. This theater was also constructed to bring a more elegant audience into the vaudeville circuit. The architects, Edmund R. Krause and the Rapp Brothers (George and Cornelius), thought that by using decadent colors and textures they could attract a more upper-class crowd than vaudeville was used to. The house of the theater also has two prosceniums. These were constructed to racially segregate the audience, as they prohibit patrons on the ground level from being able to see the patrons above them. Also, by some sources, this theater was once Chicago's tallest building. 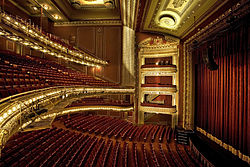 During the 2005-2006 restoration, elevators were finally installed within the theatre. Previously, patrons had to exit the theatre and use the elevators in the office building to reach the balcony. As part of the general revamp of the theater, paint chips were analyzed and the theater was repainted in what is believed to be the original color scheme. Most of the original fixtures, as well as the mosaic floor installed in the lobby when the theater opened in 1906, remain. A hidden archway in the lobby concession space was also uncovered during the restoration. This elaborately decorated arch had been walled-over years ago and was forgotten until construction began.[5] The theatre now holds 1800 seats.

The LaSalle Bank Theatre has been home to many pre-Broadway tours and World premieres. In December 2001, John Lithgow starred in Sweet Smell of Success. June 2002 was the premiere of Movin' Out based on the songs of Billy Joel and conceived, choreographed and directed by Twyla Tharp. Monty Python's Spamalot began its pre-Broadway run in Chicago in December 2004 directed by Tony and Academy Award-winner Mike Nichols and starring David Hyde Pierce, Tim Curry and Hank Azaria. Michael Crawford played a one-night benefit concert for the theatre's opening night in 2006. High School Musical premiered in July 2007 on its pre-Broadway tour. Jersey Boys began its 28-month run at the theatre in October 2007.

As the Shubert Theater, the venue hosted the premiere of The Goodbye Girl in 1993 prior to its Broadway run. The show was an adaption by Neil Simon of his screenplay of the same name with music by Marvin Hamlisch and lyrics by David Zippel and starred Bernadette Peters and Martin Short. In July 1995, the stage adaption of Victor/Victoria premiered starring Julie Andrews, Tony Roberts and Michael Nouri. It ran until September when it moved to New York.