In economics, the cost-of-production theory of value is the theory that the price of an object or condition is determined by the sum of the cost of the resources that went into making it. The cost can compose any of the factors of production (including labor, capital, or land) and taxation.

The theory makes the most sense under assumptions of constant returns to scale and the existence of just one non-produced factor of production. These are the assumptions of the so-called non-substitution theorem. Under these assumptions, the long run price of a commodity is equal to the sum of the cost of the inputs into that commodity, including interest charges.

Historically, the most well known proponent of such theories is probably Adam Smith. Piero Sraffa, in his introduction to the first volume of the "Collected Works of David Ricardo", referred to Adam Smith's adding up theory. Smith contrasted natural prices with market price. Smith theorized that market prices would tend towards natural prices, where outputs would be at what he characterized as the "level of effectual demand". At this level, Smith's natural prices of commodities are the sum of the natural rates of wages, profits, and rent that must be paid for inputs into production. (Smith is ambiguous about whether rent is price-determining or price determined. The latter view is the consensus of later classical economists, with the Ricardo-Malthus-West theory of rent.)

David Ricardo mixed such cost of production theory of prices with the labor theory of value, as that latter theory was understood by Eugen von Bohm-Bawerk and others. This is the theory that prices tend toward proportionality to the socially necessary labor embodied in a commodity. Ricardo sets this theory at the start of the first chapter of his "Principles of Political Economy and Taxation". Ricardo also refutes the labor theory of value in later sections of that chapter. This refutation leads to what later became known as the transformation problem. Karl Marx later takes up that theory in the first volume of "Capital", while indicating that he is quite aware that the theory is untrue at lower levels of abstraction. This has led to all sorts of arguments over what both David Ricardo and Karl Marx "really meant". Nevertheless, it seems undeniable that all the major classical economics and Marx explicitly rejected the labor theory of price [1]([1]).

A somewhat different theory of cost-determined prices is provided by the "neo-Ricardian school" of Piero Sraffa and his followers.

One might think of this theory as equivalent to modern theories of markup-pricing, full-cost pricing, or administrative pricing. Ever since Hall and Hitch,[2] economists[citation needed] have found that the evidence gathered in surveys of businessmen support such theories.

Market price is an economic concept with commonplace familiarity; it is the price that a good or service is offered at, or will fetch, in the marketplace; it is of interest mainly in the study of microeconomics. Market value and market price are equal only under conditions of market efficiency, equilibrium, and rational expectations.

In economics, returns to scale and economies of scale are related terms that describe what happens as the scale of production increases. They are different terms and are not to be used interchangeably.

The labor theories of value (LTV) are theories in economics according to which the true values of commodities are related to the labor needed to produce them.

Different labor theories of value prevailed amongst classical economists through to the mid-19th century. It is especially associated with Adam Smith and David Ricardo. Since that time it is most often associated with Marxian economics; while among modern mainstream economists it is considered to be superseded by the marginal utility approach. 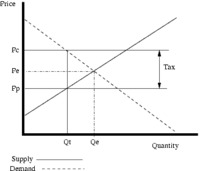 A supply and demand diagram illustrating taxes' effect on prices.
Main article: Effect of taxes and subsidies on price