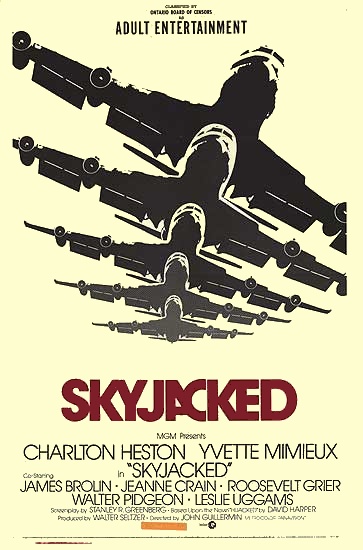 Global Airways Flight 502 -- operated by a -- takes off as a routine flight from , to Minneapolis/St.Paul, , with Captain Henry O'Hara (Charlton Heston) and his flight crew at the controls. In the middle of the flight, Captain O'Hara becomes aware of a bomb threat in the sense that he has to divert his course immediately to Anchorage, , or otherwise the bomb will explode on board. In light of this, Captain O'Hara has no other opportunity but to change course immediately to Anchorage and manages to carry out a perfect landing there, despite terrible weather circumstances.

Suddenly it appears that a disillusioned , Sgt. Jerome K. Weber (), a , is responsible for Hijacking the plane, threatening to blow it up with a , therefore taking control over the plane. At Anchorage he releases all coach class passengers, including the three coach class flight attendants, Jane, Lovejoy and Hazel. Weber then keeps all passengers as , amongst them distinguished United States Senator Arne Lindner (Walter Pidgeon), and Chief Cabin Attendant Angela Thatcher (Yvette Mimieux) and insists to be flown to , as he intends to defect to the .

Although the airline doesn't receive any clearance to fly into Soviet airspace, Sgt. Weber insists to be flown straight ahead to Moscow, threatening the pilots with death if they do not comply. Upon entering Soviet airspace, Soviet military aircraft appear to intercept the 707. Finally, Captain O'Hara lowers the and to a full landing configuration so the Soviet interceptors are aware that this is a US civilian aircraft and not a military intruder, as the Soviet authorities had thought and were therefore ordered the plane to be shot down. Captain O'Hara's wise actions result in the Soviet aircraft realizing that they have been confronted with a hijacked US civilan airplane.

The Soviet escort the 707 to their nearest landing place, Moscow Airport. There, all passengers are finally released. It becomes clear that Captain O'Hara (Charlton Heston) and Chief Cabin Attendant Angela Thatcher (Yvette Mimieux) were in love for some time but Captain O'Hara separated from Angela in order to save his . Angela is now in love with first officer Sam who takes good care of her.

After landing, Captain O'Hara and Sgt. Weber are the only persons to remain on board of the 707. Weber eventually realizes that he is unable to achieve the confidence of the Soviet authorities and his attempt to seize the 707 was futile. He appears to be lunatic. When Captain O'Hara finally tries to kick him out of his 707, Weber shoots him. Both men stagger down the gangway, where finally Weber is shot and killed by Soviet forces. As a fortune, Captain O'Hare survives, just wounded in his shoulders, and he is looking up into the sky, with a great smile of relief, whereas he sees a plane just after takeoff, so it is clear he is looking already forward to his next flight.