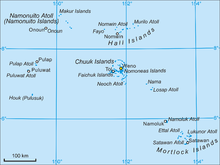 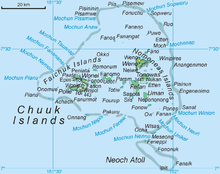 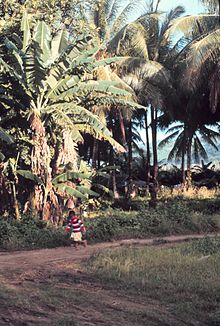 A view of Chuuk

Chuuk — formerly Truk, Ruk, Hogoleu, Torres, Ugulat, and Lugulus — is an island group in the south western part of the Pacific Ocean. It comprises one of the four states of the Federated States of Micronesia (FSM), along with Kosrae, Pohnpei, and Yap. Chuuk is the most populous of the FSM's states. Geographically, Chuuk is also part of the larger Caroline Islands group. Chuuk means mountain in the Chuukese language and was known mainly as Truk (a mispronunciation of Ruk), until 1990.

The main population center of Chuuk State is the Chuuk Lagoon, a large archipelago with mountainous islands surrounded by a string of islets on a barrier reef.[citation needed] The two major geographical and dialectic divisions of the Chuuk Lagoon are Faichuuk, the western islands, and Namoneas, the eastern islands. Chuuk State also includes several more sparsely populated "outer island" groups, including the Mortlock Islands to the southeast, the Hall Islands (Pafeng) to the north, Namonuito Atoll to the northwest, and the Pattiw Region to west. The Pattiw Region is of particular interest in that it has some of the most traditional islands in the Pacific and is culturally related to outer islands of Yap. This group includes the islands of Pollap, Tamatam, Poluwat, and Houk. Today you can still find traditional master navigators—Poluwat and Pollap are considered to have some of the best navigators and ocean-going outrigger canoes in the Pacific. In the islands of the Pattiw Region, and some of the Islands of Yap, you will still find today the last two remaining schools of navigation, Weriyeng and Faaluush. Visiting the Pattiw Region in the west, however, is difficult due to the lack of reliable transportation. Houk probably has the most accessible airstrip in the Pattiw Region, with planes landing every one or two weeks.

It is not known when the islands of Chuuk were first settled, but, based on archaeological evidence, these islands had originally been settled more than 2000 years ago. It is not known with certainty where the original inhabitants came from. Based on archaeological evidence, it seems that, after about 200 AD, there was no continuous settlement until about 1300 AD. With further archaeological work, it is possible this gap could be filled in. However, because Chuuk is not high on the archaeological agenda (See List of archaeological sites sorted by country), it is improbable that such a developed study will begin soon. It is probable that people came from Pohnpei and Kosrae to the east, based on many legend and language similarities.

As part of the colonial territory of the Caroline Islands, Truk was part of the Spanish, then German and the Japanese empires.

During World War II, Truk Lagoon was the Empire of Japan's main base in the South Pacific theatre. The Japanese garrison consisted of 27,856 IJN men under the command of Vice Admiral Masami Kobayashi then Vice Admiral Chuichi Hara and 16,737 IJA men under the command of Major General Kanenobu Ishuin.[1] A significant portion of the Japanese fleet was based there, with its administrative center on Tonoas (south of Weno). Truk was the base for Japanese operations against Allied forces in New Guinea and the Solomon Islands. Due to its heavy fortifications, both natural and manmade, the base at Truk was known to Allied forces as "the Gibraltar of the Pacific".[2]

Operation Hailstone, executed by the United States in 1944, culminated in one of the most important naval airstrikes of the war at Truk. Twelve Japanese warships, thirty-two merchant ships and 249 aircraft were destroyed, although the larger warships had moved to Palau a week earlier.

Chuuk was one of six districts of the Trust Territory of the Pacific Islands which were administered by the United States under charter from the United Nations from the end of the Second World War to the early 1990s.

On July 2, 2002, heavy rains from Tropical Storm Chataan caused more than thirty landslides that killed forty-seven people and injured dozens others, in the state's deadliest weather disaster. The landslides occurred throughout the day, some within just minutes of each other. 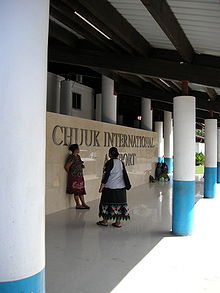 Most of the roads and transportation systems are poor or in disrepair; an extensive infrastructural redevelopment plan has begun. It consists of a five-phase project to completely reconstruct the existing sewer, water and storm drainage systems as well as pour 10" concrete roadways in the majority of the villages of Weno. Final contractual bidding was complete in late 2008 and construction began in June 2009. Completion of Phase 1, which extends from the Chuuk International Airport through downtown into Mwan Village and encompassing the roadways to the financial center, hospital, governmental center and projected site of the College of Micronesia is slated for completion by 2012. Surveying for Phase 2, which extends from Mwan Village to Wiichap is underway.

Taxis cost between $1 to $2 depending on distance traveled. Presently, a drive from the airport to the Blue Lagoon resort and dive shop could take upwards of 35 minutes to complete, although the distance is less than 5 miles. Chuuk International Airport (IATA airport code TKK) is on the administrative island of Weno. It is served by Continental Micronesia, a division of Continental Airlines, locally known as AirMic.

The government of the state operates a radio station. Interisland communication is often accomplished using citizens' band radio. Telephone services are limited on Chuuk, though a cellular network is established within some islands of the lagoon and in the near future on the outer islands. High speed Internet access via ADSL has been made available on a monthly subscription basis on the Island of Weno from May 2010.

Tourism, especially scuba diving among the many wrecks of Truk Lagoon, is the island's main industry. Copra, dried coconut meat, is the only cash crop and output is relatively insignificant. Most of the inhabitants of outlying islands engage in subsistence activity only.

The New York Province of the Society of Jesus, also known as the Jesuits, maintains a mission school on the island of Weno in Chuuk. Xavier High School is housed at the former Japanese communications center. It is a coeducational institution, drawing students from the all island groups of the Federated States of Micronesia, as well as the Republic of Palau and the Republic of the Marshall Islands. Teachers are both Jesuit and lay and come from Micronesia, the U.S., Indonesia, Japan, and Australia. All lay teachers are volunteers.

Of the 40 municipalities of the state, 16 fall within Truk Lagoon and 24 in the Outer Islands.