The yak, Bos grunniens or Bos mutus, is a long-haired bovine found throughout the Himalayan region of south Central Asia, the Tibetan Plateau and as far north as Mongolia and Russia. In addition to a large domestic population, there is a small, vulnerable wild yak population. In the 1990s, a concerted effort was undertaken to help save the wild yak population.

The English word "yak" derives from the Tibetan (Tibetan: གཡག་, Wylie: g.yag), or gyag – in Tibetan this refers only to the male of the species, the female being called a dri or nak. In English, as in most other languages which have borrowed the word, "yak" is usually used for both sexes.

Yaks belong to the genus Bos, and are therefore closely related to cattle (Bos primigenius). Mitochondrial DNA analyses to determine the evolutionary history of yaks have been somewhat ambiguous. There is little differentiation between a Yak and the Highland Cattle. The yak may have diverged from cattle at any point between one and five million years ago, and there is some suggestion that it may be more closely related to bison than to the other members of its designated genus.[2] Apparent close fossil relatives of the yak, such as Bos baikalensis, have been found in eastern Russia, suggesting a possible route by which yak-like ancestors of the modern American bison could have entered the Americas.[3]

The species was originally designated as Bos grunniens ("grunting ox") by Linnaeus in 1766, but this name is now generally only considered to refer to the domesticated form of the animal, with Bos mutus ("mute ox") being the preferred name for the wild species. Although some authors still consider the wild yak to be a subspecies, Bos grunniens mutus, the ICZN made an official ruling in 2003[4] permitting the use of the name Bos mutus for wild yaks, and this is now the more common usage. [1][3][5]

Woman and yak at Qinghai Lake

Yaks are heavily built animals with a sturdy frame, short legs, and rounded hooves. They have small ears and a wide forehead, with smooth hollow horns that are generally dark in colour. In males, the horns sweep out from the sides of the head, and then curve forward; they typically range from 48 to 99 centimetres (19 to 39 in) in length. The horns of females are smaller, only 27 to 64 centimetres (11 to 25 in) in length, and have a more upright shape. Both sexes have a short neck with a pronounced hump over the shoulders, although this larger and more visible in males.[3]

Both sexes have long shaggy hair with a dense woolly undercoat over the chest, flanks, and thighs to insulate them from the cold. Especially in males, this may form a long "skirt" that almost reaches the ground. The tail is long, with a large plume of hair over much of its length. Wild yaks typically have black or dark brown hair over most of the body, with a greyish muzzle, although some wild golden-brown individuals have been reported. Domesticated yaks have a wider range of coat colours, with some individuals being white or piebald. The udder in females and the scrotum in males are small and hairy, as protection against the cold. Females have four teats.[3]

Yak physiology is well adapted to high altitudes, having larger lungs and heart than cattle found at lower altitudes, as well as greater capacity for transporting oxygen through their blood[10] due to the persistence of foetal haemoglobin throughout life.[11] Conversely, yaks do not thrive at lower altitudes,[12] and begin to suffer from heat exhaustion above about 15 °C (59 °F). Further adaptations to the cold include a thick layer of subcutaneous fat, and an almost complete lack of functional sweat glands.[10]

Compared with domestic cattle, the rumen of yaks is unusually large, relative to the omasum. This likely allows them to consume greater quantities of low-quality food at a time, and to ferment it longer so as to extract more nutrients.[10]

Yaks have some of the strongest odors of any domesticated animal, often[by whom?] described as a combination of cow manure and wet dog. Their thick coat of fur plays a strong role in this, as fecal and urinary odor often becomes "trapped" inside.[citation needed]

Yaks mate in the summer, typically between July and September, depending on the local environment. For the remainder of the year, many males wander in small bachelor groups away from the large herds, but, as the rut approaches, they become aggressive and regularly fight amongst each other to establish dominance. In addition to non-violent threat displays, bellowing, and scraping the ground with their horns, male yaks also compete more directly, repeatedly charging at each other with heads lowered or sparring with their horns. Like bison, but unlike cattle, males wallow in dry soil during the rut, often while scent-marking with urine or dung.[3] Females enter oestrus up to four times a year, and females are receptive only for a few hours in each cycle.[13]

Gestation lasts between 257 and 270 days,[10] so that the young are born between May and June, and results in the birth of a single calf. The female finds a secluded spot to give birth, but the calf is able to walk within about ten minutes of birth, and the pair soon rejoin the herd.[10] Females of both the wild and domestic forms typically give birth only once every other year,[3] although more frequent births are possible if the food supply is good.

Calves are weaned at one year and become independent shortly thereafter. Wild calves are initially brown in colour, and only later develop the darker adult hair. Females generally give birth for the first time at three or four years of age,[14] and reach their peak reproductive fitness at around six years. Yaks may live for more than twenty years in domestication or captivity,[3] although it is likely that this may be somewhat shorter in the wild. 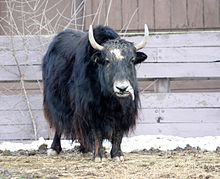 Yak at a zoo in Syracuse, New York

Wild yaks (Bos grunniens mutus or Bos mutus, Tibetan: འབྲོང་, Wylie: 'brong) usually form herds of between ten and thirty animals. They are insulated by dense, close, matted under-hair as well as their shaggy outer hair.[15] Yaks secrete a special sticky substance in their sweat which helps keep their under-hair matted and acts as extra insulation.[citation needed] This secretion is used in traditional Nepalese medicine.[citation needed] Many wild yaks are killed for food by hunters in China; they are now a vulnerable species.[16]

The diet of wild yaks consists largely of grasses and sedges, such as Carex, Stipa, and Kobresia. They also eat a smaller amount of herbs, winterfat shrubs, and mosses, and have even been reported to eat lichen. Historically, the main natural predator of the wild yak has been the Tibetan wolf, but brown bears and snow leopards have also been reported as predators in some areas.[3]

Thubten Jigme Norbu, the elder brother of Tenzin Gyatso, the 14th Dalai Lama, reported on his journey from Kumbum in Amdo to Lhasa in 1950:

Before long I was to see the vast herds of drongs with my own eyes. The sight of those beautiful and powerful beasts who from time immemorial have made their home on Tibet's high and barren plateaux never ceased to fascinate me. Somehow these shy creatures manage to sustain themselves on the stunted grass roots which is all that nature provides in those parts. And what a wonderful sight it is to see a great herd of them plunging head down in a wild gallop across the steppes. The earth shakes under their heels and a vast cloud of dust marks their passage. At nights they will protect themselves from the cold by huddling up together, with the calves in the centre. They will stand like this in a snow-storm, pressed so close together that the condensation from their breath rises into the air like a column of steam. The nomads have occasionally tried to bring up young drongs as domestic animals, but they have never entirely succeeded. Somehow once they live together with human beings they seem to lose their astonishing strength and powers of endurance; and they are no use at all as pack animals, because their backs immediately get sore. Their immemorial relationship with humans has therefore remained that of game and hunter, for their flesh is very tasty.
—Thubten Norbu, Tibet is My Country[17]

Wild yaks are found primarily in northern Tibet and western Qinghai, with some populations extending into the southernmost parts of Xinjiang, and into Ladakh in India. Small, isolated populations of wild yak are also found farther afield, primarily in western Tibet and eastern Qinghai. In historic times, wild yaks were also found in Nepal and Bhutan, but they are now considered extinct in both countries, except as domesticated animals.[1]

The primary habitat of wild yaks consists of treeless uplands between 3,000 and 5,500 m (9,800 and 18,000 ft), dominated by mountains and plateaus. They are most commonly found in alpine meadows with a relatively thick carpet of grasses and sedges, rather than the more barren steppe country.[18]

Yaks are herd animals. Herds can contain several hundred individuals, although many are much smaller. The herds consist primarily of females and their young, with a smaller number of adult males. The remaining males are either solitary, or found in much smaller groups, averaging around six individuals. Although they can become aggressive when defending young, or during the rut, wild yaks generally avoid humans, and may rapidly flee for great distances if any approach.[3] 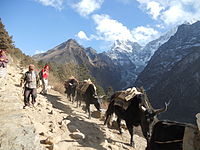 Domesticated yaks have been kept for thousands of years, primarily for their milk, fibre and meat, and as beasts of burden. Their dried dung is an important fuel, used all over Tibet, and is often the only fuel available on the high treeless Tibetan plateau. Yaks transport goods across mountain passes for local farmers and traders as well as for climbing and trekking expeditions. "Only one thing makes it hard to use yaks for long journeys in barren regions. They will not eat grain, which could be carried on the journey. They will starve unless they can be brought to a place where there is grass."[19] They also are used to draw ploughs. Yak milk is often processed to a cheese called chhurpi in Tibetan and Nepali languages, and byaslag in Mongolia. Butter made of Yaks' milk is an ingredient of the butter tea that Tibetans consume in large quantities,[20] and is also used in lamps and made into butter sculptures used in religious festivities.[21] Yaks grunt, and unlike cattle are not known to produce the characteristic bovine lowing sound.

In parts of Tibet and Karakorum yak racing is a form of entertainment at traditional festivals and is considered an important part of their culture. More recently, sports involving domesticated yaks, such as yak skiing, or yak polo, are being marketed as tourist attractions in Central Asian countries, including Gilgit-Baltistan, Pakistan.

In Nepal, Tibet and Mongolia, domestic cattle are crossbred with yaks. This gives rise to the infertile male dzo as well as fertile females known as dzomo or zhom, which may be crossed again with cattle. The "Dwarf Lulu" breed, "the only Bos primigenius taurus type of cattle in Nepal" has been tested for DNA markers and found to be a mixture of both taurine and zebu types of cattle (B. p. taurus and B. p. indicus) with yak.[22] According to the International Veterinary Information Service, the low productivity of second generation cattle-yak crosses makes them suitable only as meat animals.[23]