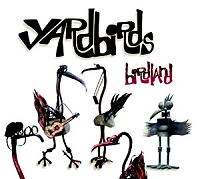 "Birdland" is a 2003 album by English band and was the first Yardbirds release in over 35 years. The musicians in this version of the Yardbirds differed greatly from their 60's counterpart containing only drummer and rhythm guitarist , although makes a cameo on one track. Aside from the new replacements (, , ) several guest cameos are done by notable guitarists such as , , Slash, , , and .

The album contains seven new tracks composed mostly by McCarty or Dreja, and eight remakes of Yardbirds songs from the 1960s.

The album features several guitar legends which play on multiple tracks. These songs/guitarists are as follows: