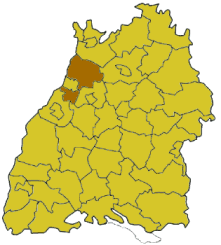 Karlsruhe is a district ("Kreis") in the north-west of , . Neighboring districts are (from north clockwise) , Heilbronn,
Enz, Calw, Rastatt, Germersheim, and the district-free city . The urban district is located in the middle of the district, and cuts it into a northern and a southern part.

The western part of the district is located in the valley. The area in the east belongs to the landscape of the "Kraichgau", and it is also to the north of the foothills of the .

Starting in the district had a partnership with the Welsh county of Gwent. In Gwent was abolished, with the area split into several separate districts due to administrative reform, and the partnership has since continued with two new of these districts: and .

Since the district has had a partnership with the Döbeln district in , and since with the in .