Oil! is a novel by Upton Sinclair published in 1927 told as a third person narrative. The book was written in the context of the Harding administration's Teapot Dome Scandal and takes place in Southern California. It is a social and political satire skewering the human foibles of all its characters.

The main character is James Arnold Ross Jr., nicknamed Bunny, son of an oil tycoon. Bunny's sympathetic feelings towards oilfield workers and socialists provoke arguments with his father throughout the story.

The book is divided into twenty-one chapters with titles, which are further subdivided into numbered sections.

The book is loosely based on the life of Edward L. Doheny (and the company he co-founded, Pan American Petroleum & Transport Company, the California assets of which became Pan American Western Petroleum Company), and also the strategic alliance Union-Independent Producers Agency, a consortium created in 1910 to bring oil via pipeline from Kern County to the Pacific Coast facilities of Union Oil Company at Port Harford (now called Port San Luis just west of Avila Beach). 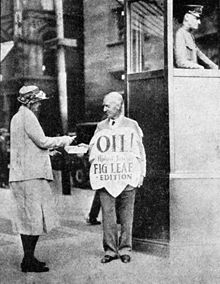 Oil! was banned in Boston[1] for its motel sex scene. His publisher printed 150 copies of a "fig-leaf edition" with the offending nine pages blacked out. Sinclair protested the decision and hoped to bring an obscenity case to trial. He did not do so, but the controversy helped make the book a bestseller.[2]

The 2007 feature film There Will Be Blood, directed by Paul Thomas Anderson, is very loosely based on the novel. Unlike the novel, There Will Be Blood focused on the father, with his son being a supporting character. Paul Thomas Anderson also claimed that he only incorporated the first 150 pages of the book into his film, so the rest of the film and novel are nearly entirely different. Anderson used Edward Doheny and several men to form his composite lead character Daniel Plainview. Additionally the oil museums in Kern County, California and the libraries and museums in the area around Silver City, New Mexico, and especially the period photography, played a large part in shaping his screenplay and the film.[3][4][5]