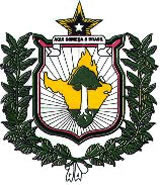 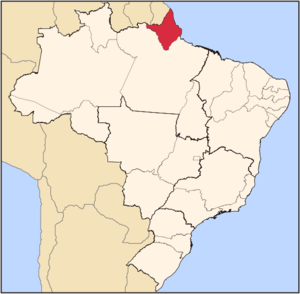 Amapá (pronounced|amaˈpa [In . The pronunciation is IPA| [ɐmɐˈpa] .] ) is one of the states of , located in the extreme north, bordering and to the north. To the east is the , and to the south and west is the Brazilian state of . Perhaps one of the main features of the State is the River Oiapoque, as it was once considered the northernmost point of Brazil. The river's estuary is at the extreme north of the Brazilian coast and it is often used to describe the remote points of . The dominate landscape of the region - 90 percent of the total area - is the huge . Unexplored forests dominate 70 percent of its territory. Another attraction is the Equator, which divides not only the state but also the Northern and Southern hemispheres. The only method by which to reach is through or .

As the "" of Costa do Cabo Norte, the region was invaded by the English and Dutch, who were repelled by the Portuguese. The , in 1713 established the boundaries between Brazil and , but these were not respected by the French. In the 18th century, retook control of the area. This dispute would continue until 1900.

With the discovery of and the increasing value of on the international market during the 19th century contributing to increases in population in Amapá, the territorial dispute with France was brought to a head; finally on December 1st, 1900, the Arbitration Commission of Geneva ceded possession of the territory to Brazil, which incorporated it into the state of with the joint name of Araguari (named for the river of the same name). It became the federal territory of Amapá in 1943.

The discovery of rich deposits in in 1945 revolutionized the local economy, but Amapá did not achieve statehood until October 5th, 1988 with the promulgation of the new Brazilian Constitution.

The State of Amapá has also the lowest deforestation rate of its original vegetation: only 2%. Most of its territory is occupied by forests, with the remaining area corresponding to savannah and plain areas. At the seaside, almost intact beaches get mixed with swamps, composing the largest Brazilian representation of this biome, where this mix of salt and fresh water is perfect for the reproduction of the food chain for several animal species.

The flag was adopted by decree No. 008 of April 23, 1984. The blue color on the top symbolizes the sky over Amapá and justice, the green in the middle the native rainforest, and the yellow on the bottom the Union and its natural resources. The black in the small strips stands for the deceased who worked for the state, and the white for the will of the state to live in peace and stability. The symbol at the left symbolizes the Fortress of São José, out of which the state capital grew.

Before 1984 the state had a red-white-red flag very similar to the flag of .