Douglas Fairbanks, Sr. (May 23, 1883 – December 12, 1939) was an American actor, screenwriter, director and producer.[1] He was best known for his swashbuckling roles in silent films such as The Thief of Bagdad, Robin Hood, and The Mark of Zorro.

The father of Douglas Fairbanks, Hezekiah Charles Douglas Ullman (1833–1915), was born in Berrysburg, Pa. but raised in Williamsport. He was the fourth child in a relatively well-to-do Jewish family of six sons and four daughters. Charles' parents, Lazarus Ullman and Lydia Abrahams, had immigrated to the U.S. in 1830 from Baden, Germany. When he was 17, Charles started a small publishing business in Philadelphia. Two years later he left for New York to study law. He was admitted to the Pennsylvania bar in 1856 and began building a substantial practice. At the onset of the Civil War, Charles joined the Union forces. He engaged in several battles, was wounded, and later became a captain of the 5th Pennsylvania Reserves. Charles left the service in 1864 and returned to his law practice. Subsequently he founded the U.S. Law Association, a forerunner of the American Bar Association.

Charles met Ella Adelaide Marsh (1847–1915) after she married his friend and client John Fairbanks, a wealthy New Orleans sugar mill and plantation owner. The Fairbankses had a son, John, and shortly thereafter John Senior died of tuberculosis. Ella, born into a wealthy southern Catholic family, was overprotected and knew little of her husband's business. Consequently, she was swindled out of her fortune by her husband's partners. Even the efforts of Charles Ullman, acting on her behalf, failed to regain any of the family fortune for her. Distraught and lonely, she met and married a courtly Georgian, Edward Wilcox, who turned out to be an alcoholic. After they had a son, Norris, she divorced Wilcox, and Charles acted as her lawyer in the suit. The pretty southern belle soon became romantically involved with Charles and agreed to move to Denver with him to pursue mining investments. They arrived in Denver in 1881 with her son, John. (Norris was left in Georgia with relatives and was never sent for by his mother.) They were married and had a child, Robert, in 1882, and then a second son, Douglas, a year later. Charles purchased several mining interests in the Rocky Mountains and he re-established his law practice. Charles Ullman abandoned the family when Douglas was five years old, however, and he and his older brother Robert were brought up by their mother, who gave them the family name Fairbanks, after her first husband.

Douglas Fairbanks began acting on the Denver stage at an early age, doing amateur theatre. He was in summer stock at the Elitch Gardens Theatre, becoming a sensation in his teens. He attended Denver East High School, and was once expelled for dressing up the campus statues on St. Patrick's Day. He left during his senior year. He said he attended Colorado School of Mines for a term but no record of attendance has been found. An article on the matter recounts a professor once saying Fairbanks was asked to leave because of a prank not long after he began. It is also claimed he attended Harvard University. Fairbanks moved to New York in the early 1900s to pursue an acting career, joining the acting troupe of British actor Frederick Warde who had discovered Fairbanks performing in Denver. He worked in a hardware store and as a clerk in a Wall Street office before his Broadway debut in 1902.

On July 11, 1907 in Watch Hill, Rhode Island, he married Anna Beth Sully, the daughter of wealthy industrialist, Daniel J. Sully. They had one son, Douglas Elton Fairbanks, who later became known as actor "Douglas Fairbanks Jr.". The family moved to Hollywood, California in 1915. 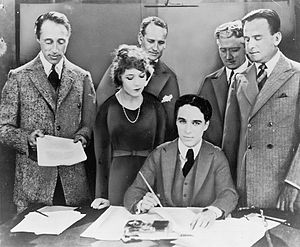 Fairbanks signed a contract with Triangle Pictures in 1915 and began working under the supervision of D.W. Griffith. His first film was titled The Lamb, and in the film, he debuted his remarkable athletic abilities that would gain wide attention among theatre audiences.[3]

His athleticism was not appreciated by Griffith, however, and he was brought to the attention of Anita Loos and John Emerson, who wrote and directed many of his early romantic comedies. In 1916, Fairbanks established his own company, the Douglas Fairbanks Film Corporation,[4] and would soon get a job at Paramount.[4] By 1918, Fairbanks was Hollywood's most popular actor;[5] within eighteen months of his arrival, Fairbanks' popularity and business acumen raised him up to be the third highest paid. 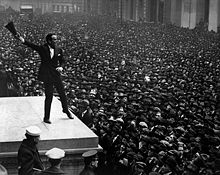 Fairbanks met actress Mary Pickford at a party in 1916 and they began an affair. In 1917, the couple joined Fairbanks' friend Charlie Chaplin[3] selling war bonds by train across the U.S. Pickford and Chaplin were then the two highest paid film stars in Hollywood. To curtail these stars' astronomical salaries, the large studios attempted to monopolise distributors and exhibitors.

Sully was granted a divorce from Fairbanks in late 1918, the judgement being finalized in early 1919.

To avoid being controlled by the studios and to protect their independence, Fairbanks, Pickford, Chaplin, and D. W. Griffith formed United Artists in 1919, which created their own distributorships and gave them complete artistic control over their films and the profits generated. The company was kept solvent in the years immediately after its formation largely from the success of Fairbanks' films. 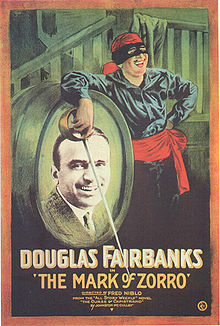 The Mark of Zorro

Fairbanks was determined to have Pickford become his wife, but she was still married to actor Owen Moore. He finally gave her an ultimatum. She then obtained a fast divorce in the small Nevada town of Minden, Nevada, on March 2, 1920. Fairbanks leased the Beverly Hills mansion Grayhall and was rumoured to have used it during his courtship of Pickford.

The couple married on March 28, 1920. Pickford's divorce from Moore was contested by Nevada legislators, however, and the dispute was not settled until 1922. Even though the lawmakers objected to the marriage, the public went wild over the idea of "Everybody's Hero" marrying "America's Sweetheart". They were greeted by large crowds in London and Paris during their European honeymoon, becoming Hollywood's first celebrity couple.

During the years they were married, Fairbanks and Pickford were regarded as "Hollywood Royalty," famous for entertaining at their Beverly Hills estate, Pickfair. 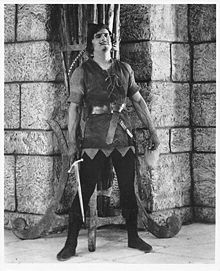 Douglas Fairbanks in the title role in Robin Hood (1922).

By 1920, Fairbanks had completed twenty-nine films (twenty-eight features and one two-reel short), which showcased his ebullient screen persona and athletic ability. By 1920, he had the inspiration of staging a new type of adventure-costume picture, a genre that was then out of favour with the public; Fairbanks had previously been a comic in his other films.[2] In The Mark of Zorro, Fairbanks combined his appealing screen persona with the new adventurous, costume element. It was a smash success and parlayed the actor into the rank of superstar. For the remainder of his career in silent films, he continued to produce and star in ever more elaborate, impressive costume films, such as The Three Musketeers (1921), Douglas Fairbanks as Robin Hood (1922), The Thief of Bagdad (1924), The Black Pirate (1926, the first full-length Technicolor film), and The Gaucho (1927). Fairbanks spared no expense and effort in these films, which established the standard for all future swashbuckling films.

In 1921, he, Pickford, Chaplin, and others, helped to organize the Motion Picture Fund to assist those in the industry who could not work, or were unable to meet their bills.

During the first ceremony of its type, he and Pickford placed their hand and foot prints in wet cement at the newly opened Grauman's Chinese Theatre in Hollywood on April 30, 1927. Fairbanks was elected first President of the Motion Picture Academy of Arts and Sciences that same year, and he presented the first Academy Awards at the Roosevelt Hotel. Fairbanks also has a star on the Hollywood Walk of Fame at 7020 Hollywood Boulevard.

His last silent film was the lavish The Iron Mask (1929), a sequel to 1921's The Three Musketeers which included an introductory prologue spoken by Fairbanks. While Fairbanks had flourished in the silent genre, the restrictions of early sound films dulled his enthusiasm for film-making. Also, his athletic abilities and general health began to decline, in part due to years of heavy chain-smoking. He and Pickford chose to make their first talkie as a joint venture, playing Petruchio and Kate in Shakespeare's The Taming of the Shrew (1929). This film, and his subsequent sound films, were poorly received by Depression era audiences. The last film he acted in was the British production The Private Life of Don Juan (1934), after which he retired from acting. 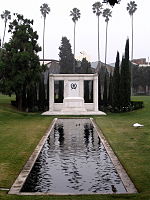 Fairbanks and Pickford separated in 1933, after he began an affair with Sylvia, Lady Ashley. They divorced in 1936, with Pickford keeping the Pickfair estate. Within months Fairbanks and Ashley were married in Paris.

He continued to be marginally involved in the film industry and United Artists, but his later years lacked the intense focus of his film years. His health continued to decline, and in his final years he lived at 705 Ocean Front (now Pacific Coast Highway) in Santa Monica, California, although much of his time was spent traveling abroad with Sylvia.

In December 1939, at 56, Fairbanks had a heart attack in his sleep and died a day later at his home in Santa Monica. By some accounts[citation needed], he had been obsessively working out against medical advice, trying to regain his once-trim waistline. Fairbanks's famous last words were, "I've never felt better."[6] His funeral service was held at the Wee Kirk o' the Heather Church in Glendale's Forest Lawn Memorial Park Cemetery where he was placed in a crypt in the Great Mausoleum. He was deeply mourned and honored by his colleagues and fans for his contributions to the film industry and Hollywood.

Two years following his death, he was removed from Forest Lawn by his widow, who commissioned an elaborate marble monument for him featuring a long rectangular reflecting pool, raised tomb, and classic Greek architecture in Hollywood Forever Cemetery. The monument was dedicated in a ceremony held in October 1941, with Fairbanks' close friend Charles Chaplin reading a remembrance. The remains of his son, Douglas Fairbanks, Jr., were also interred here upon his death in 2000.

In 1998, a group of Fairbanks fans started the Douglas Fairbanks Museum in Austin, Texas. The museum building was temporarily closed for mold remediation and repairs in February 2010.[7] Plans and fundraising efforts are underway to re-open the museum to the public. In the meantime an online virtual museum project makes parts of the collections and past exhibits available for viewing on the museum's website.[8]

On January 24, 2009, AMPAS opened an exhibition at their Fourth Floor Gallery dedicated to Fairbanks titled, "Douglas Fairbanks: The First King of Hollywood". The exhibit featured costumes, props, pictures, and documents from his career and personal life. The exhibit ran until April 2009.[10] In addition to the exhibit, AMPAS screened Thief of Bagdad and The Iron Mask in March 2009. Recently, due to his involvement with the USC Fencing Club, a bronze statue of Fairbanks was erected in the Academy of Motion Picture Arts & Sciences Courtyard of the new School of Cinematic Arts building on the University of Southern California campus. Fairbanks was a key figure in the film school's founding in 1929, and in its curriculum development.