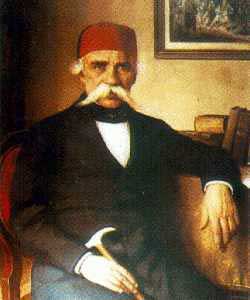 Vuk Stefanović Karadžić (Serbian : Вук Стефановић Караџић) (, - , ) was a Serbian linguist and major reformer of the .

Karadžić was born to parents Stefan and Jegda (maiden Zrnić) in the village of , near in Serbia, which was then still a part of the . His family had a low infant survival rate and he was thus named Vuk ('wolf') so that witches and evil spirits would not hurt him. His family were members of the tribe and moved to Tršić from , .

He was taught how to read and write by his cousin Jevta Savić, who was the only literate person in the region. He continued his education in Loznica, and later in the monastery of . Because he was not taught anything in the monastery, but was made to pasture the livestock instead, his father brought him back home. After unsuccessful attempts to enroll him in the gymnasium at , for which 19 year-old Karadžić was too old, Karadžić left for Petrinje where he spent a few months learning German. Later, he left for , in order to meet his beloved Enlightenment scholar , who rudely fended him awayFact|date=September 2008. Disappointed, Karadžić left for and began working as a scribe for . After the opening of the school in Belgrade, Karadžić becomes one of its first pupils.

Soon after, he grew ill and left for medical treatment in Pest and , but was unable to get treatment for his sick leg. Lame, Karadžić returned to Serbia, and after the unsuccessful rebellion in 1813 left for where he met who helped him carry out his goals of reforming the and its orthography. Due to conflicts with , Karadžić was forbidden to publish books in Serbia and Austria, but managed to get help in Russia where he also received a full pension in 1826. His only surviving child was his daughter, Mina Karadžić. He died in Vienna. His bones were relocated to Belgrade in 1897 and buried with great honours next to the grave of Dositej Obradović.

As one of the leading European philologists of his time, Karadžić reformed the Serbian literary language and standardized the by following strict phonemic principles on the German model. Karadžić's reforms of the Serbian literary language modernized it and distanced it from Serbian and Russian , instead bringing it closer to common folk speech, specifically, to the dialect of Eastern which he spoke. Karadžić was, together with , the main Serbian signatory to the Vienna Agreement of 1850 which, encouraged by n authorities, laid the foundation for the Serbian language, various forms of which are used by Serbs in , , and today. Karadžić also translated the into Serbian, which was published in 1868.

In addition to his linguistic reforms, Karadžić also made great contributions to folk literature, using peasant culture as the foundation. Because of his peasant upbringing, he closely associated with the oral literature of the peasants, compiling it to use in his collection of folk songs, tales, and proverbs. While Karadžić hardly considered peasant life romantic, he highly regarded it as an integral part of Serbian culture. He collected several volumes of folk prose and poetry, including a book of over 100 lyrical and epic songs learned as a child and written down from memory. He also published the first dictionary of vernacular Serbian. For his work he received little financial aid, at times living in poverty.

"Write as you speak and read as it is written." (The essence of modern Serbian spelling)

Although the above quotation is usually attributed to Vuk Stefanović Karadžić, it is in fact an orthographic principle devised by the German grammarian and philologist . Karadžić merely used that principle to push through his language reform (as stated in the book "" by ).

The attribution of the quote to Karadžić is a common misconception in Serbia. Due to that fact, the entrance exam to the Faculty of of the () occasionally contains a question on the authorship of the quote (as a sort of trick question).