Cheema ( Punjabi: ਚੀਮਾ, Urdu: چیمہ) (also spelt Chìma) is a Jatt of Jat ethnicity found inPunjab, Haryana, Rajasthan and also in Pakistan.Cheemas are one of the two major sub clans of Jats along with other Jat clans like Sandhu, Grewal, Pannu, Uppal etc.. .Historically, this tribe has held considerable tracts in the upper Rechna Doab since Mughal era. They usually own extensive agricultural lands, and are influential landlords (Zamindar) and many associated with aristocracy in and outside their respective areas. Cheemas historically spread to Punjab- India and Punjab- Pakistan.

There is an old folk saying about Cheema and Chatha tribes in Punjabi "Cheemey tey Chatthey, khaan peen nu vakkhon vakh tey larran bhiran nu katthey" (English translation : Cheemas and Chatthas are separate in their feasts but united for the fights). This adage originated from age old alliance between Chima and Chatha tribes in Rechna Doab.

Cheemas come from the large and prominent group of tribes the Jatts in Punjab. Cheemas are one of the two major sub clans of the 72 sub clans in Jats. Jats are a brave, hard-working and independent minded people known for their military prowess, many Jats were recruited into the British Indian Army during World War I. Historically, this tribe has held considerable tracts in the upper Rechna Doab since Mughal era. They usually own extensive agricultural lands, and are influential landlords (Zamindar) and many associated with aristocracy in and outside their respective areas. The visible strength of the Cheema family can be seen in the first 1947 constitution of Pakistan, where the Cheema tribe was listed in the second line as one of the 40 largest families coming into Pakistan.

The Cheema tribe was designated by the British as a Martial race. Martial Race is a designation created by officials to describe races (peoples) that were thought to be naturally warlike and aggressive in battle, and to possess qualities like courage, loyalty, self sufficiency, physical strength, resilience, orderliness, hard working, fighting tenacity and military strategy. The British recruited heavily from these Martial Races for service in the colonial army. The British described Cheema as a powerful, united and Alexander like qualities, but quarrelsome tribe.[1]

Main article: History of the Punjab

Scythian warriors, drawn after figures on an electrum cup from the Kul'Oba kurgan burial near Kerch. The warrior on the right strings his bow, bracing it behind his knee; note the typical pointed hood, long jacket with fur or fleece trimming at the edges, decorated trousers, and short boots tied at the ankle. Scythss apparently normally wore their hair long and loose, and all adult men apparently wore beards. The gorytos appears clearly on the left hip of the bare-headed spearman; his companion has an interesting shield, perhaps representing a plain leather covering over a wooden or wicker base. (Hermitage Museum, St Petersburg)

Alexander overran the Achaemenid Empire in 331 BCE and marched into present-day Afghanistan with an army of 50,000. His scribes do not record the names of Gandhara or Kamboja; rather, they locate a dozen small political units in those territories. This rules out the possibility of Gandhara and/or Kamboja having been great kingdoms in the late 4th century BCE. In 326 BCE, most of the dozen-odd political units of the former Gandhara/Kamboja Mahajanapadas were conquered by the Macedonian conqueror.

Alexander invited all the chieftains of the former satrapy of Gandhara to come to him and submit to his authority. Ambhi, ruler of Taxila, whose kingdom extended from the Indus to the Hydaspes (Jhelum), complied. After confirming him in his satrapy, Alexander marched against the Sakas (Cheemas are considered to be decadents of the Sakas) and Kamboja highlanders of the Kunar also Swat valleys known in Greek texts as Aspasios and Assakenois (q.v.) and in Indian texts as Ashvayana and Ashvakayana (names referring to their equestrian nature), who had refused to submit to Alexander [2]. The Ashvayan, Ashvakayan, Kamboja and allied Saka [3] clans offered tough resistance to the invader and fought him to a man. When worse came to worst, even the Ashvakayan women took up arms and joined their menfolk on the field, thus preferring "a glorious death to a life of dishonor" [4].

Thereafter, Alexander marched east to the Hydaspes, where Porus, ruler of the kingdom between the Hydaspes (Jhelum) and the Akesines (Chenab) refused to submit to him. The two armies fought the historic Battle of the Hydaspes River on the riverbank outside the town of Nikaia (near the modern city of Jhelum). Porus's army fought bravely, but was no match for Alexander's. When the defiant Raja (though wounded and having lost his sons) was brought before Alexander, a legendary conversation took place in which Alexander inquired of Porus, "How should I treat you?", the brave Porus shouted back, "The way a victorious king treats the defeated king." Alexander was struck by his spirit. He not only returned the conquered kingdom to Porus, but added the land lying between the Akesines (Chenab) and the Hydraotis (Ravi), whose ruler had fled. Alexander's army crossed the Hydraotis and marched east to the Hesidros (Beas), but there his troops refused to march further east, and Alexander turned back, following the Jhelum and the Indus to the Arabian Sea, and sailing to Babylon.

In the middle of the 2nd century BC, the Yuezhi tribe of modern China moved westward into Central Asia, which, in turn, caused the Sakas (Scythians) to move west and south. The Northern Sakas, also known as the Indo-Scythians, moved first into Bactria, and later crossed the Hindu Kush into India, successfully wresting power from the Indo-Greeks. They were followed by the Yuezhi, who were known in India as the Kushans or Kushanas. The Kushanas founded a kingdom in the 1st century that lasted for several centuries. Both the Indo-Scythians and the Kushans embraced Buddhism, and absorbed elements of Indo-Greek art and culture into their own. Another Central Asiatic people to make Punjab their home were the Hephthalites (White Huns), who engaged in continuous campaigns from across the Hindu Kush, finally establishing their rule in India in the fifth century. 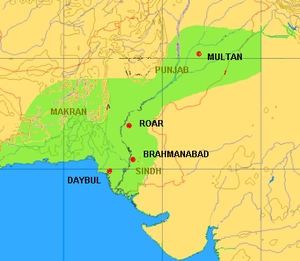 Some historical accounts suggest that many sub tribes (including the Cheemas) of the Jatts were "oppressed" by Hindu king Raja Dahir who ruled over Punjab where the majority of the population followed Buddhism. Other historical accounts disagree on the claim of active persecution, though Hinduism and Buddhism did spiritually compete, with Hinduism being at a distinct advantage since it received state backing.The Jat made strong alliances with the Muslim Arabs and hailed the conquest of Muhammad bin Qasim an Arab general. Muhammad bin Qasim defeated the Hindu Raja Dahir in alliance with Jats and other Buddhist Rajas. On his arrival at the town of Brahmanabad between six and sixteen thousand men died in the ensuing battle. Buddhists and the Jat, Meds and Bhutto tribes hailed him as a rescuer from tyranny at the hands of Chach of Alor and his kin (regarded as usurpers of the Rai Dynasty).[3].

Baladhuri A Persian by birth, though his sympathies seem to have been strongly with the Arabs, for Masudi refers to one of his works in which he rejects Baladhuri's condemnation of non-Arab nationalism Shu'ubiyya.

Oppression of the Jats

The narrative in the Chach Namah conveys that Chach humiliated the Jats and Lohanas. Denzil Ibbetson records that

The line of rulership before Islam runs: Siharus, Raja Sahasi II, Chach, Raja Dahir. The first two were Buddhist Rajputs and the last two Hindu Brahmins. There is a difference of opinion among historians concerning the social dynamic between the Jatts and the Brahmins. Some historians suggest that the relationship was an adversarial one, with Brahmins using their high caste status to exploit and oppress the Jatts, Meds and Buddhists, who formed the bulk of the peasantry [9]. According to a quote by historian U.T Thakkur, "When Chach, the Brahmim chamberlain who usurped the throne of Rajput King Sahasi II went to Brahmanabad, he enjoined upon the Jats and Lohanas not to carry swords, avoid velvet or silken cloth, ride horses without saddles and walk about bare-headed and bare-footed" [10].

However, Thakkur also writes that Hinduism and Buddhism existed side by side, suggesting a more complex dynamic between the endogamous groups. The king was a Brahmin, but a majority of his advisers were Buddhists. The ruler of Brahmanabad, a Jatt, also had professed Buddhism as his spiritual guide. Nonetheless, there was a strong sense of "ideological dualism" between them, which he wrote was the inherent weakness that the Arabs exploited in their favor when they invaded the region[10].

It was because of this background that Muhammad bin Qasim received cooperation from the Buddhists as well as the Jats and Meds during his campaign in Sind [4](An advanced history of India by Ramesh Chandra Majumdar; Hemchandra Raychaudhuri; Kalikinkar Datta Delhi: Macmillan India, 1973) In fact he was hailed as deliverer by several sections of local population. The position of the Buddhists in Sind seeking support from outside can be read in the Chach Nama.

Some historians think that dahir married his sister and jat people considered it incest. So jat opposed it then dahir compared jat to shudra Sind had a large Buddhist population at this time but the ruler, Dahir, was a Brahmin. It is said that the Buddhists been receiving constant information from their co-religionists in Afghanistan and Turkistan about the liberal treatment meted out to them by the Arab conquerors of those regions.[12]. Thus, bin-Qasim received cooperation from the Buddhist population [13]. The Buddhist ruler of Nerun (Hyderabad) had secret correspondence with Muhammad Bin Qasim. Similarly, Bajhra and Kaka Kolak, Buddhist Rajas of Sewastan, allied themselves with Muhammad Bin Qasim [14].

From the time of the Mahabharata wars (1500-500 BCE) Shakas (Cheemas are considered decadents of Shakas) receive numerous mentions in ancient Indian texts they are described as part of an amalgam of other war-like tribes from the northwest.

Mahabharata, too similarly groups the Shakas with the Kambojas and Yavanas and states that they were originally noble Kshatriyas but got degraded to to vrishala status on account of their non-obersvance of the sacred Brahmanical codes[15].

Manusmriti places the Shakas with the Kambojas, Yavanas, Pahlavas, Paradas and labels them all as degraded Kshatriyas (Holy Warriors) defying the Brahmanical codes and rituals [16].

In the "Puranas Darada" the Cheema sub-tribes have been regarded as "Rakshasas" not having darshan of the Brahmin. 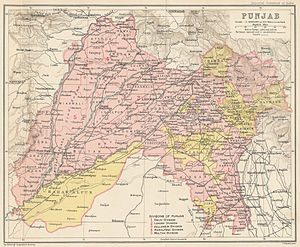 Cheema are most numerous in Sialkot and in Faridkot district of East Punjab followed by forty two villages in Gujranwala district. According to Cunningham this area of high Cheema density was called "Chima des" (Des or Desh, in Hindustani and Punjabi means country ). Many settled in Sargodha,Lyallpur(Faisalabd)and Montgomery (Sahiwal) during the British rule of Punjab due to construction of extensive canal network in these areas. They also have few villages scattered across Rawalpindi, Bhawalpur, Amritsar, Gurdaspur, Jalandhar, Moga, Ludhiana and Sangrur.

In Pakistan, Gujranwala and Sialkot districts has large Cheema population with many Cheema villages such as Begowala, Sahowala, Bohpal wala , KamalpurKala Chak, Manpur Malkhanwala. Also in Rawalpindi district, there is a village near Gujar Khan which is named Sui Cheemian and has a substantial population of Cheema's. In Southern Punjab, Bahawalpur and Yazman are richly populated with the Cheema Families and their saturated villages and the area elects more than a dozen cabinet members.