Serranus Clinton Hastings (November 22, 1814 – February 18, 1893) was a 19th-century politician and a prominent lawyer in the United States. He studied law as a young man and moved to the Iowa District in 1837 to open a law office. Iowa became a territory a year later, and he was elected a member of the House of Representatives of the Iowa Territorial General Assembly. When the territory became the state of Iowa in 1846, he won an election to represent the state in the United States House of Representatives. After his term ended, he became Chief Justice of the Iowa Supreme Court. He resigned after one year in office and moved to California. He was appointed to the California Supreme Court as Chief Justice a few months later. He won an election to be Attorney General of California, and assumed office shortly after his term as Chief Justice ended. He began practicing law again as Attorney General. He earned a small fortune with his law practice and used that fortune to finance his successful real estate venture. In 1878, he founded the Hastings College of the Law with a donation of US$100,000.

Hastings was born in Watertown, Jefferson County, New York, on November 22, 1814 to Robert Collins Hastings and Patience Brayton.[1] Robert Collins Hastings was a good friend and supporter of DeWitt Clinton, whom Serranus gets his middle name from.[9] When Robert died in 1824, the family moved to St. Lawrence County, New York. He completed a six-year course at Gouverneur Academy, and in 1834, he became taught and became the principal at Norwich Academy, located in Chenango County, New York.[2] He introduced the Hamiltonian system of instruction and the Angletean system of mathematics to the academy. In 1835, he resigned from his position at the academy to study law.[9]

Hastings began to study law with Charles Thorpe, Esq., of Norwich. After a few months of study, he decided to move to Lawrenceburg, Indiana. He completed his legal studies there with Daniel S. Majors, Esq. He did not immediately enter the practice of law and instead became an editor of the Indiana Signal, where he supported Martin Van Buren in his presidential campaign. He moved to Terre Haute, Indiana, in December 1836 and underwent a legal examination by Judge Porters of the Circuit Court.[10]

In January 1837, Hastings moved to the Iowa District, which was part of the Wisconsin Territory.[2][10] He settled in Burlington for a short time and then moved to Bloomington, which would later become Muscatine, Iowa.[2] He was examined by Judge Irwin, was admitted to the bar, and opened a law office. Shortly after this, he was commissioned Justice of the Peace by Wisconsin Territorial Governor Henry Dodge. He had jurisdiction over the 90 miles between Burlington, Iowa, and Davenport, Iowa, the western boundary was undefined. He only had one case to deal with: a man accused of stealing US$30 from a citizen and $3 from the court.[10] He found the man guilty and sentenced him to be tied to an oak tree, receive 33 lashes across his back, be transported across the Mississippi River to Illinois, and be banished from the territory forever.[10][11] When Iowa Territory was organized in 1838, he won an election to represent Muscatine County, Louisa County, and Slaughter County in the House of Representatives of the Iowa Territorial General Assembly. He served from November 12, 1838, to January 25, 1839. He was reelected to that position in 1839, this time representing Muscatine County and Johnson County from November 4, 1839, to January 14, 1840.[12] In 1840, a border conflict with Missouri called the Honey War took place. He received the military title of Major and helped capture a sheriff. No battle took place, and the two states compromised on the border issue.[2][13] 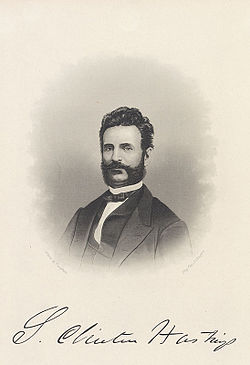 Hastings married Azalea Brodt on June 10, 1840, in Muscatine, Iowa. They had two children while living in Muscatine, Marshall and Clara L. He was elected to the Legislative Council that year, representing Muscatine County and Johnson County again, and served from November 3, 1840 to January 15, 1841. He was re-elected the following year, and served from December 6, 1841 to February 18, 1842. He was not elected to the Fifth and Sixth General Assemblies. He was elected President of the Legislative Council for the Seventh General Assembly, and also represented Muscatine County and Johnson County on the council. He served from May 5, 1845 to June 11, 1845. He was elected to the council for the Eight General Assembly, which was also the final one since Iowa was to become a state on December 28, 1846. He represented the same counties he had previously, and served from December 1, 1845 to January 19, 1846.[12] During his time on the Legislative Council he helped compile the "Blue Book" of Iowa laws.[14] It became known as the "Old Blue Book" and was the first legal code for the Iowa, Nebraska, Dakota, and Montana Territories.[15]

In 1846, Hastings was nominated to represent Iowa at large in the United States House of Representatives as a Democrat.[16] On December 29, 1846, he was elected over the Whig candidate G. C. R. Mitchell.[6][16] He was the second youngest member serving in Congress at that time.[1] He served during the second session of the 29th United States Congress, which ended on March 3, 1847.[6] Close to a year after his term ended as a member of the House of Representatives, Governor Ansel Briggs appointed him as the third Chief Justice of the Iowa Supreme Court. He started his term on January 26, 1848, and resigned on January 14, 1849 to move to California, his family deciding to stay in Iowa.[2][4]

Hastings settled in Benicia, California, and a few months later, California legislature selected him to be the first Chief Justice of the California Supreme Court.[2][8] He started his term on December 20, 1849, but the court did not assemble until March 4, 1850.[8][17] In 1851, his family moved from Iowa to live with him in California.[2] During his term as Chief Justice he ran for the office of Attorney General of California.[8] Elections were held on September 3, 1851, and he won with 52.2% of the votes. The Whig candidate, William D. Fair, received the rest of the votes.[18] His term as Chief Justice ended in December 1851, and he assumed office as Attorney General on January 5, 1852.[7] While serving as Attorney General, he could practice law as well, something he could not do as Chief Justice. The wealth he earned during this time became the foundation of the larger fortune he would later earn in real estate.[8] He ended his two-year term on January 2, 1854.[7]

Hastings continued to practice law after his term as Attorney General ended, and also became a member of the Henley, Hastings & Co. bank firm located in Sacramento, California. The banking firm failed, with little loss to him though. Around 1857, he left professional life, and started investing in real estate.[8] He and his wife had seven more children after this: Charles Foster Dio., Douglas, Uhler, Robert Paul, Flora Azalea, Ella, and Lillie. He gradually acquired around one hundred lots of real estate in San Francisco, and bought large tracts of land in Solano, Napa, Lake, and Sacramento counties.[8] In 1861, he put up many four-room buildings in the south side of San Francisco for the poor with the money he earned in real estate. The rent was $10 a month, and as a business venture it was a success.[19] By 1862, he was worth $900,000, which was largely attributed to his real estate investments.[8] In 1865, he traveled to Europe; four years later he accompanied William H. Seward to view the recently purchased territory of Alaska. Hastings College of Law, the law department of the University of California, was founded on March 28, 1878 with his donation of $100,000. The college offered him the position of dean and he accepted the offer.[2] He was professor of comparative jurisprudence at the college as well, a position he held until 1887. He helped establish St. Catherine Academy in Benicia, California, with a donation of $6,000. He also helped publish two volumes of the botany of the Pacific coast. His contribution to botany would later be recognized by having the plant genus Hastingsia named after him.[20]

Hastings died at the age of 78 on February 18, 1893 in San Francisco, California.[2] He was buried at St. Helena Public Cemetery in St. Helena, California.