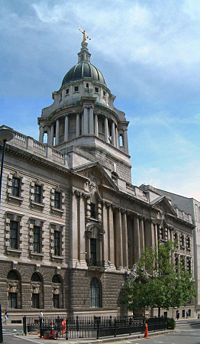 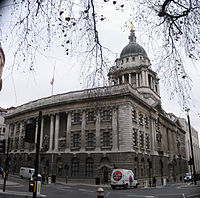 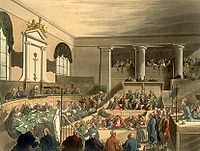 The Central Criminal Court in England and Wales, commonly known as the Old Bailey from the street in which it stands, is a court building in central London, one of a number of buildings housing the Crown Court. The Crown Court sitting at the Central Criminal Court deals with major criminal cases from Greater London and, in exceptional cases, from other parts of England and Wales. Part of the present building stands on the site of the medieval Newgate Gaol, on Old Bailey, a road which follows the line of the City of London's fortified wall (or bailey). It lies between Holborn Circus and St Paul's Cathedral.

As there is a requirement for justice to be seen to be done, trials at the Old Bailey, as at other courts, are open to the public, subject to stringent security procedures.

The building and its history

The court originated as the sessions house of the Lord Mayor and Sheriffs of the City of London and of Middlesex. The original medieval court was first mentioned in 1585; it was next to the older Newgate prison, and seems to have grown out of the endowment to improve Newgate prison and rooms for the Sheriffs, made possible by a gift from Sir Richard Whittington. It was destroyed in the 1666 Fire of London and rebuilt in 1674, with the court open to the weather to prevent the spread of disease. In 1734 it was refronted, enclosing the court and reducing the influence of spectators: this led to outbreaks of typhus, notably in 1750 when sixty people died, including the Lord Mayor and two judges. It was rebuilt again in 1774 and a second courtroom was added in 1824. Over 100,000 criminal trials were carried out in the Old Bailey from 1674 to 1834, including all death penalty cases.[1] In 1834 it was renamed as the Central Criminal Court and its jurisdiction extended beyond that of London and Middlesex to the whole of the English jurisdiction for trial of major cases. Her Majesty's Courts Service manages the courts and administers the trials but the building is owned and run by the City of London Corporation, who finance the building, the running of it, the staff and the maintenance out of their own resources.[2]

The court was originally meant to be the site where only criminals accused of crimes committed in the City and Middlesex were tried. However, in 1856, there was public revulsion at the accusations against the doctor, William Palmer, that he was a poisoner and murderer. This led to fears that he could not receive a fair trial in his native Staffordshire. The Central Criminal Court Act of 1856 was passed to enable his trial to be held at the Old Bailey.

In the 19th century, the Old Bailey was a small court adjacent to Newgate Prison. Hangings were a public spectacle in the street outside until late into the century.[2] The condemned would be led along Dead Man’s Walk between the prison and the court, and many were buried in the walk itself. Large, riotous crowds would gather and pelt the condemned with rotten fruit and vegetables and stones.[2] In 1807, 28 people were crushed to death after a pie-seller's stall overturned. A secret tunnel was subsequently created between the prison and St Sepulchre’s church opposite, to allow the priest to minister to the condemned man without having to force his way through the crowds.[2]

The present building dates from 1902, but it was officially opened on 27 February 1907. It was designed by E. W. Mountford and built on the site of the infamous Newgate Prison, which was demolished to allow the court buildings to be constructed. Above the main entrance is inscribed the admonition, "Defend the Children of the Poor & Punish the Wrongdoer". King Edward VII opened the courthouse.

On the dome above the court stands a bronze statue of Lady Justice, executed by British sculptor F. W. Pomeroy. She holds a sword in her right hand and the scales of justice in her left. The statue is popularly supposed to show blind Justice; however, the figure is not blindfolded: the courthouse brochures explain that this is because Lady Justice was originally not blindfolded, and because her “maidenly form” is supposed to guarantee her impartiality which renders the blindfold redundant.[3]

During The Blitz, the Old Bailey was bombed and severely damaged, but subsequent reconstruction work restored most of it in the early 1950s. In 1952, the restored interior of the Grand Hall of the Central Criminal Courts was once again open. The interior of the Great Hall (underneath the dome) is decorated with paintings commemorating the blitz, as well as quasi-historical scenes of St Paul's Cathedral with nobles outside. Running around the entire hall are a series of axioms, some of biblical reference. They read:

The Great Hall (and the floor beneath it) is also decorated with many busts and statues, chiefly British monarchs, but also of legal figures, and those who achieved renown by campaigning for improvement in prison conditions in the eighteenth and nineteenth centuries. This part of the building also houses the shorthand-writers' offices.

The lower level also hosts a minor exhibition on the history of the Old Bailey and Newgate featuring historical prison artefacts.

In 1973 The Provisional IRA exploded a car bomb in the street outside the courts, and a shard of glass is preserved as a reminder, embedded in the wall at the top of the main stairs.[2]

Between 1968 and 1972, a new South Block, designed by the architects, Donald McMorran and George Whitby, was built to accommodate more modern courts. There are presently 18 courts in use. Court 19 is now used as a press overflow facility.

The original ceremonial gates to the 1907 part of the building are only used by the Lord Mayor and visiting royalty. The general entrance to the building is a few yards down the road in the South Block and is often featured as a backdrop in television news reports. There is also a separate rear entrance, not open to the public, which permits more discreet access. In Warwick Square, on the western side of the complex, is the 'Lord Mayor's Entrance'.

A remnant of the city wall is preserved in the basement beneath the cells.

The most senior permanent judge of the Central Criminal Court has the title of Recorder of London, and his deputy has the title of Common Serjeant of London. The position of Recorder of London is distinct from that of recorder which is a part-time judicial office, holders of which sit part-time as judges of the Crown Court or the County Court. Some of the most senior criminal lawyers in the country sit as Recorders in the Central Criminal Court.

As of 2010[update] the Recorder of London is Judge Peter Beaumont QC, appointed in December 2004 following the death of his predecessor, Judge Michael Hyam. The Common Serjeant is Judge Brian Barker QC.

The court house originated as part of the City of London's borough judicial system, and it remains so. The Recorder and the Common Serjeant are both City officers, and the Recorder is a member of the Common Council because he is also a member of the Court of Aldermen. The City's Sheriffs and the Lord Mayor are justices there, but their jurisdiction is now nominal. The Sheriffs are resident with the senior judges in the complex. In Court Number 1, there are several benches set aside for the committee of the Bridge House Estates, which is the actual owner of the building.

As the court in which the most serious criminal cases in London, and often the whole of England and Wales, have been heard for centuries, there are many references to the Old Bailey.