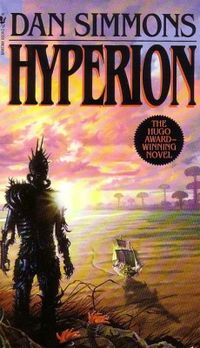 The Hyperion Cantos is a series of science fiction novels by Dan Simmons. Set in the far future, and focusing more on plot and story development than technical detail, it falls into the soft science fiction category. The title was originally used for the collection of the first pair of books in the series, Hyperion and The Fall of Hyperion,[1][2] and later came to refer to the overall storyline, including Endymion, The Rise of Endymion, and a number of short stories.[3][4] Within the fictional storyline, the Hyperion Cantos is an epic poem written by the character Martin Silenus.[5]

A film adaptation of the series titled Hyperion is being developed by Warner Bros. and will encompass the Hyperion and The Fall of Hyperion novels.[9][10][11][12]

First published in 1989, Hyperion has the structure of a frame story, similar to Geoffrey Chaucer's Canterbury Tales and especially to Giovanni Boccaccio's Decameron. The story weaves the interlocking tales of a diverse group of travelers sent on a pilgrimage to the Time Tombs on Hyperion. The travelers have been sent by the Shrike Church and the Hegemony (the government of the human star systems) to make a request of the Shrike. As they progress in their journey, each of the pilgrims tells their tale.

The Fall of Hyperion

Main article: The Fall of Hyperion

This book concludes the story begun in Hyperion. It abandons the frame structure of the first novel, instead using a more conventional chronological narrative (although several jumps in time take place).

The story commences 272 years after the events in the previous novel. Few main characters from the first two books are present in the later two. The main character is Raul Endymion, an ex-soldier who receives a death sentence after an unfair trial. He is rescued by Martin Silenus and asked to perform a series of rather extraordinarily difficult tasks. The main task is to rescue and protect Aenea, a messiah coming from the distant future via time travel. The Catholic Church has become a dominant force in the human universe and views Aenea as a potential threat to their power. The group of Aenea, Endymion, and A. Bettik (an android) evades the Church's forces on several worlds, ending the story on Earth.

The Rise of Endymion

Main article: The Rise of Endymion

This final novel in the series finishes the story begun in Endymion, expanding on the themes in Endymion as Raul and Aenea battle the church and meet their respective destinies.

The Hyperion universe originated when Simmons was an elementary school teacher, as an extended tale he told at intervals to his young students; this is recorded in "The Death of the Centaur", and its introduction. It then inspired his short story "Remembering Siri," which eventually became the nucleus around which Hyperion and the Fall of Hyperion formed. After the quartet was published came the short story Orphans of the Helix. "Orphans" is currently the final work in the Cantos, both chronologically and internally.

The original Hyperion Cantos has been described as a novel published in two volumes, published separately at first for reasons of length.[3][13] In his introduction to Orphans of the Helix, Simmons elaborates:

"Some readers may know that I've written four novels set in the 'Hyperion Universe'—Hyperion, The Fall of Hyperion, Endymion, and The Rise of Endymion. A perceptive subset of those readers—perhaps the majority—know that this so-called epic actually consists of two long and mutually dependent tales, the two Hyperion stories combined and the two Endymion stories combined, broken into four books because of the realities of publishing."[14]

Much of the appeal of the series stems from its extensive use of references and allusions from a wide array of thinkers such as Teilhard de Chardin, John Muir, Norbert Wiener, and to the poetry of John Keats, a famous English Romantic poet of the 19th century, and the monk Ummon; a large number of technological elements are acknowledged by Simmons to be inspired by elements of Out of Control: The New Biology of Machines, Social Systems, and the Economic World.

The Hyperion series has many echoes of Jack Vance, explicitly acknowledged in one of the later books.

The title of the first novel, "Hyperion," is taken from one of Keats's poems, the unfinished epic Hyperion. Similarly, the title of the third novel is from Keats' poem Endymion. Quotes from actual Keats poems and the fictional Cantos of Martin Silenus are interspersed throughout the novels. Simmons goes so far as to have two artificial reincarnations of John Keats ("cybrids": artificial intelligences in human bodies) play a major role in the series.

Much of the action in the series takes place on the planet Hyperion. It is described as having one-fifth less gravity than Earth standard. Hyperion has a number of peculiar indigenous flora and fauna, notably Tesla trees, which are essentially large electricity-spewing trees. It is also a "labyrinthine" planet, which means that it is home to ancient subterranean labyrinths of unknown purpose.

Most importantly, however, Hyperion is the location of the Time Tombs, large artifacts surrounded by "anti-entropic" fields that allow them to move backward through time. The region where the Tombs are located is also the home of the Shrike, a menacing being that features prominently in the series.

The Hawking Drive was developed by humanity before the Big Mistake, allowing the faster than light travel which led to the Hegira. It was named after Stephen Hawking; whereas the hawking mat was named after the species of bird found on old Earth. Aenea later revealed that the TechnoCore created FTL drive by utilising the Void Which Binds.

The Farcaster network was given to humanity by the TechnoCore and again it was another use of the Void Which Binds that allowed this instantaneous travel between worlds.

A Core-provided starship drive that allows near-instantaneous travel between any two points in human-occupied space. The drive's use kills any human on board a Gideon-propelled starship; thus, the technology is only of use with remote probes or when used in conjunction with the Pax's resurrection technology.

The resurrection creche can regenerate someone carrying a cruciform from their remains (though not always); this is integrated into the Pax Christian church original concept of resurrection. Usually it requires a clergy man to oversee (apparently, only a small percentage know the secrets involved), but Gideon Drive Pax spaceships, whose near-instantaneous travel killed its passengers, were equipped with automatically working devices.

Living trees (related to Dyson trees) that are propelled by ergs (spider-like solid-state alien being that emits force fields) through space. The ergs also generate the containment fields around the enormous tree that keep its atmosphere intact. There are only a small number of Treeships in existence - in Hyperion, the Consul remarks that the Yggdrasill is one of only five.